Despite the fact that we were both hugely fatigued, we had
arrived in NYC and as such left our bags and embarked on a trek immediately.  We took the subway downtown, then walked the West
Village, Greenwich Village, and took lunch in a nice French bistro.  Afterwards over towards NYU, Washington
Square, Union Square, and all the way up Fifth Avenue to midtown.  I think at least a 12 km walk.  I was more than ready for a siesta.

For dinner we took the subway down to the East Village.  I remember the EV in 1981 being a haunted
house; it was riddled with graffiti and drug addicts and you never knew what
you would encounter around the next corner.
It was actually terrifying on the dimly lit side-streets after dark.  Now it’s rather tame.  We went to Calliope, a place we’d read about
in the New Yorker, on East 4th north of Houston.  We didn’t have a reservation and they were
booked but they gave us a place at the bar.
We got there early, around seven (two hours earlier than south American
dinner time!) and the place packed out fast.
By eight every table was booked, there were people waiting, and it was
two deep at the bar.  Incredible dinner:
A lovely salad to start, gorgeous poached halibut in beurre blanc, a
spectacular rabbit stuffed with leeks, carrot and wrapped in bacon on a lentil
stew, and a rhubarb tart to finish.
Amazing.  I told the chef he
should serve the rabbit dish with a straw.
Although we both could have crashed then and there NYC is
too exciting to give in, so we took the subway back to midtown then walked in
and around Times Square before returning to the hotel.
Up early and out the door Friday and it was, yes, raining.  Not sprinkling, good old fashioned Vancouver pouring rain.  With wind.  Any remnant of my tan peeled off immediately.  We decided given the weather to visit the MOMA; it’s been about 20 years since I was there and of course it’s had a complete reno.  We arrived to find every tourist in midtown was doing the same.  We lined up, and lined up, and lined up. 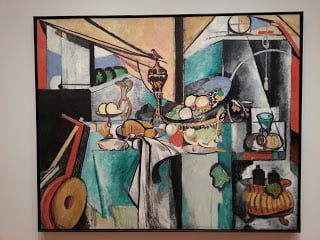 After the museum and lunch we popped into the Bloomingdale’s flagship on Lexington and 59th then went downtown to window shop.  The rain had turned to a sprinkle, so all was not lost.