Cloud cover.  Haven’t
seen that in a while!  It warmed up on Tuesday but never cleared and only to around 21, more humid than hot.  The hotel was abuzz.  Well, the whole time it’s been crazy busy.When we arrived on the weekend Lollapalooza
was on.  The hotel was filled with
trendies, hangers-on, music media types, wannabe rap stars.  Keane were staying here; SS saw the lead in
the lobby and I saw some of the band by the pool waiting (probably for their
limo).  Keane: Great tunes but not rock
star lookers, none of them sports a Richie Sambora mullet, and even though they’ve done the best Elton John covers they can’t come close in hair or brooches.  They are sort of like the
guys in the garage you knew growing up who accidentally made it huge.  Then, Monday, Lollapalooza ended and an
international conference converged and the lobby became a sea of suits all
speaking myriad languages minting deals with Blackberrys and iPhones.  Today, some sort of media event has started
alongside the suits, photo shoots of models, mics set up in the lobby for
interviews.  It’s nothing if not a
madhouse.
We took the subway for the first time; with traffic so heavy
here it’s a preferred option but SS had read that during rush hour it was
impossible to get on board.  In fact,
they have rush hour prices higher than not.
But in keeping with local flavour, evening rush hour begins at 6 p.m.
and ends at 8 p.m.  The old, worn, dimly
lit and poorly staffed Buenos Aires trains were about 25 cents whereas here,
the regular, clean, bright, well staffed and air conditioned trains about $1.75
per.  What did it remind us of?  Oh yes, Toronto.
We visited the business centre, Plaza de Armas (designed from a grid laid out in 1541), where some
of the oldest buildings remain (as in surviving the 2010 8.8 earthquake).  Our #1 bucket list item was the Museum of
Pre-Columbian Art which was, unfortunately, closed for renovation.  Doh!  Instead we walked through the area, various
neighbourhoods including the old city market or mercado, a rabbit warren of stalls and smells, not all of them enticing, then at 1:30 took the metro back to our hotel neighbourhood
and had lunch at a hopping spot Coquineria; reservations required—for
lunch.  But we luckily snagged a table. 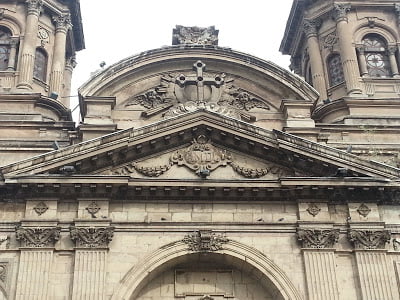 We spent the afternoon in another leafy burb north of us
profiled in the NYT “36 Hours in Santiago” from 2011.  The NYT called Santiago #1 of 41 destinations
to visit in 2011.  Seems a bit of a
stretch.  But we enjoyed our walk, ended
up at a high end mall that was sort of Eaton Centre crossed with Park Royal.
For dinner we had plans to traverse afar but it would have
involved a fair bit of walking, taxis along with the complexities of language
so we ate at a small bistro near the hotel.
Plus, my expensive Tod’s loafers are only meant for show it turns out.  We shared five tapas items which were fresh
and hit the spot.  No dessert but they
gave us some rice pudding with sweet chili pepper which was very nice.  The hotel was knee deep in navy suits when we
got back.  It’s like being at private school.