It was a gorgeous morning.
Sunny but cool, around 14.  By mid
afternoon 27.  Evening a light
breeze, down to 21.  Absolutely perfect weather. 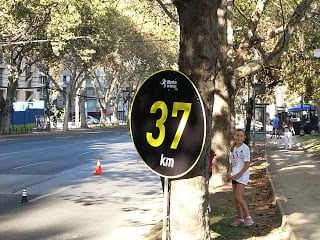 We took a coffee a block away on the patio at a
Starbucks.  Then SS suggested a walking
route which, I should have guessed, was more a trek than a walk.  We headed towards the Mapocho river which cuts
through the centre of town and has lovely pedestrian and bike paths.  First thing we stumbled upon a marathon, or half marathon, a measly 42 km.
Then we discovered a sculpture garden.
While the city holds (for us) very little architectural interest, public
art is everywhere, at metro stops, park benches, throughout the town.  We made a few wrong turns but eventually got
to Bellavista.
Public art is everywhere 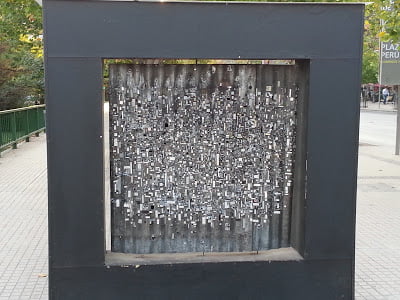 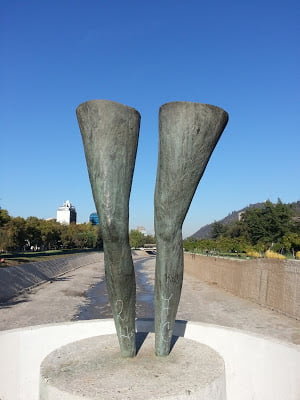 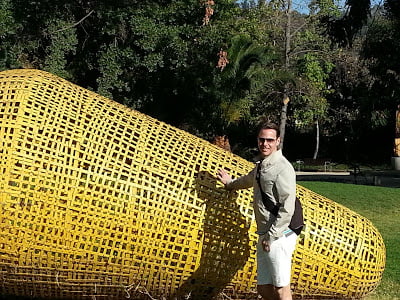 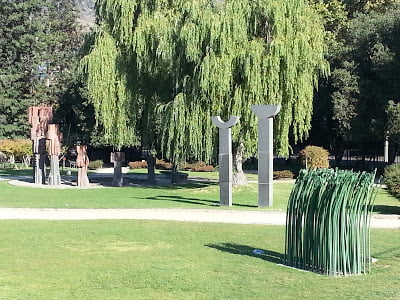 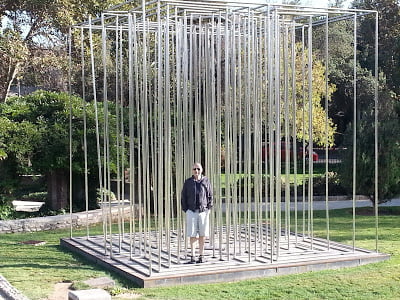 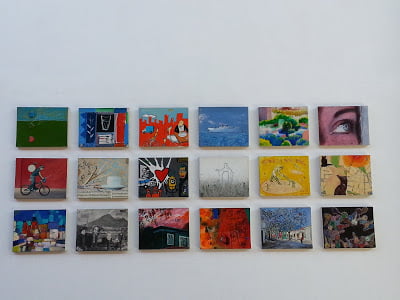 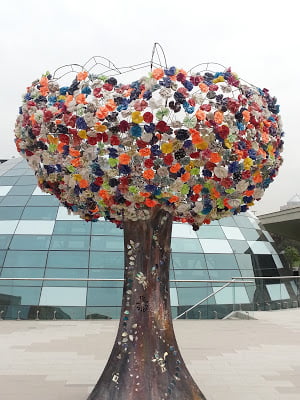 Bellavista is to Santiago what Palermo was to Buenos Aires;
an older neighbourhood, in the midst of gentrification, renovation, and
rebirth.  It still has an old and
decaying feeling even while all sorts of shops and restaurants pop up.  At one end is a plaza with a tourist
funicular, quite large, which goes up Cerro San Cristobel, a mountain which is
also Santiago’s largest green space.  The
air quality here is notoriously bad, it has an LA type of geography, but we
lucked out with quite clear skies and fantastic views.  Of, well, a lot of buildings and urban
sprawl. 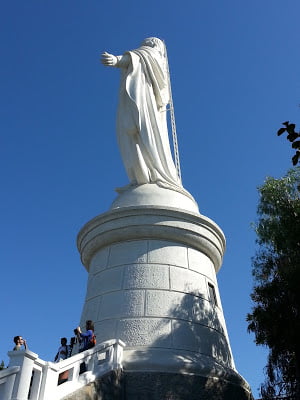 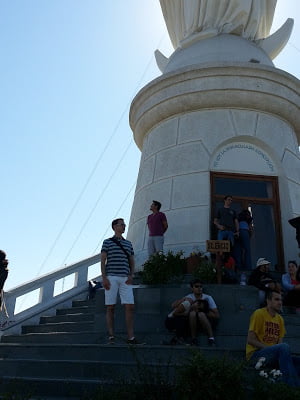 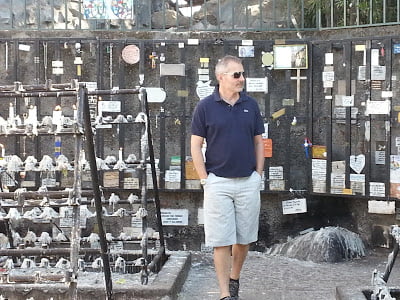 The funicular ride was a little more reassuring than the
rickety old boxes in Valparaiso.  They
had four levels, a staff person was on board, and there were two.  You separated midstream on a sidetrack.  It took about 12 minutes to get to the top, though you still had to take 226
steps to get to the Virgin of Immaculate Conception, which towers over the
park.  (Yes, I pulled a Pop and counted.)  There is an older chapel on site,
and a large open air church where, so they say, Pope JP once gave mass.  It was a mass of families and cyclists, not
churchgoers, on our visit.  But there was
plenty of tourist and religious tat to go around, for those with the interest.
After the funicular ride we strolled Bellavista and took a
Peruvian lunch on a patio at a Cebicheria (a ceviche cafe).  SS had the real thing, but they also do a vegetarian
version.  Then we shared Tequenos, like
an empanada but fried, and finally a “taller in saltado,” a stab in the dark, but
turned out to be a Peruvian version of chow mein.
Pics around Bellavista 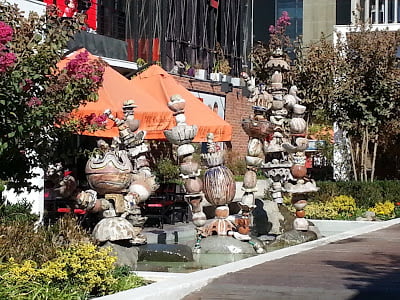 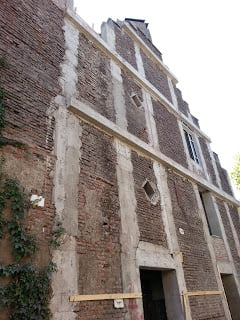 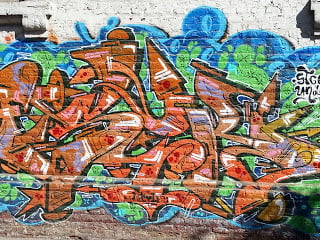 Guess what?  There was
more walking after lunch.  We must have
been over 10km by now but we persevered into the centre, the business centre,
which unlike most cities, was nowhere near the financial centre (that’s back
where our hotel is).  It was shut up
tight like a lock.  Interesting to see
Sunday still being observed as a day of rest.
We stopped in at the modern art museum which was showing etchings by
various Chilean artists.  Had a mixed
reaction to that.  After a mosey about we
started back on the river route.  It was
stinking hot by now and we needed a few shade breaks and ended up having water
at a cafe before hitting the hotel close to 5:30. 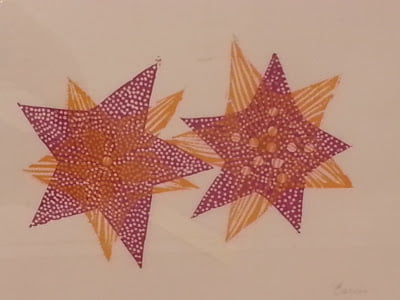 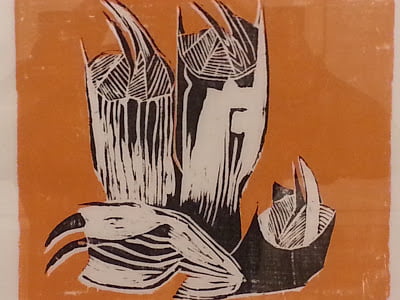 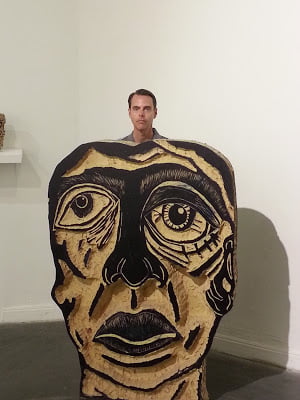 Siesta.
Dinner locally.  SS had a nice egg and spinach starter then risotto.  For not the first time I ordered a vegetable salad and got walnut and blue cheese, then a simple fried fish and potatoes.  Good.  Lollapalooza is in Santiago this week and the hotel was hopping.
Someone had a significant birthday April 8.  SS turned [factual error].  “He turned how old?” I asked.  He turned “[expletive deleted] years old” was
the response.  So this is in fact the
most boring blog entry ever because the trip was a celebration but the day
wasn’t.  We had a lazy morning, a nice
walk through a neighbourhood called Provendicia, took lunch on the terrace at
the hotel and spent the afternoon by the pool on the roof.  It was supposed to hit 29 but I think only
got to 27.  Regardless, very hot.  I hid under the shade of a cabana.

The W has a beautiful lap pool with
spectacular views.  There is also a
restaurant and for some time it was the hottest destination in the city; for
whatever reason it was closed a while ago and therefore has become a magical
refuge of quiet and serenity. 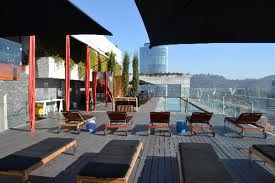 There
might have been six or seven of us up there tops—and the hotel is full!  For dinner we went to Astrid y Gaston, a
Peruvian inspired restaurant, and the number one restaurant on
TripAdvisor.  Food and service were great
but it took forever to get dinner.  About
40 odd minutes for our starters and from the time we sat down to the time we
got our mains was 102 minutes.  And it
was the same for everyone.  At one point
I overheard an American man loudly complaining “I’m not going to sit here all
night…” It was not the most memorable of significant birthday dinners.