On the afternoon we arrived in Banff there wasn’t a lot of
time until dinner so we climbed Tunnel Mountain, a sort of local “Grouse grind”
in the late day heat; 4.8 kms but only 260 meters.  Gorgeous views and not a cloud in the
sky.  Views east toward Calgary and west
towards BC. 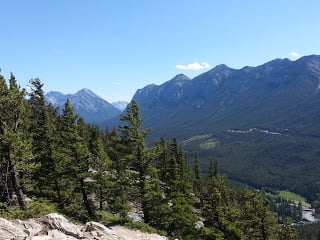 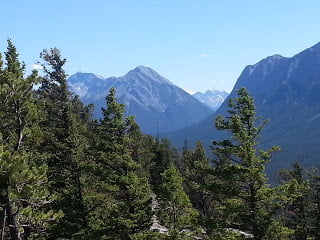 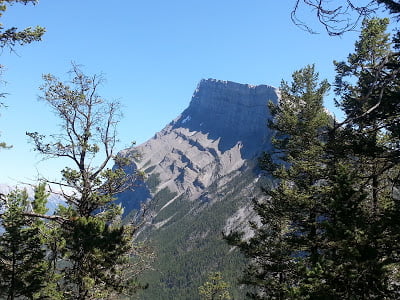 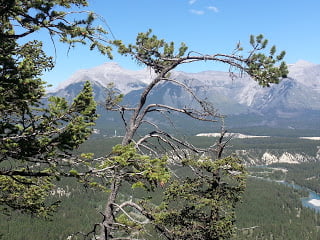 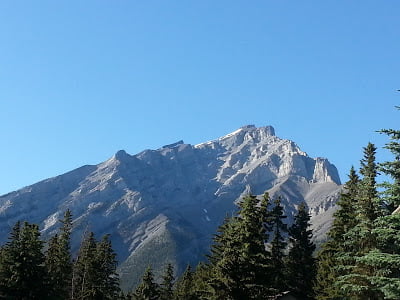 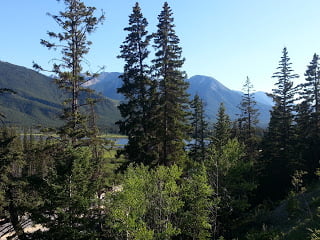 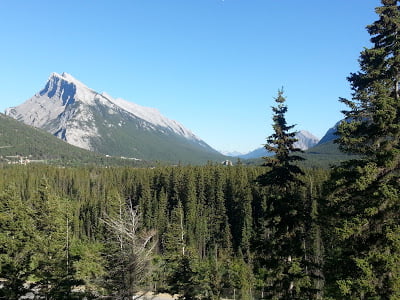 For dinner we had a reservation at the Jupiter, a sort of
Twin Peaks-ish motel with a wonderful modern kitchen.  The outside patio had lovely views but you
battle the bugs, the Hwy 1 din not too far away, and the sun slipping away (the
Jupiter sits at the far west end of Banff, nestled on a high bench).
Saturday we headed out fairly early after a Starbucks
stop.  Instead of whizzing down the 1, we
took the slower, windier, back route along the Bow Valley Parkway, or 1A.  We pulled into Johnston Canyon at 8:30 and
one of the two parking lots was already full.
Hordes were descending on (what I would call) the easy, paved (yes
paved) path, much of it along catwalks, to the cascading waters of the Lower
and Upper Falls.  A great little
diversion but with foreigners in cork wedgies and faux hikers with their gear
and poles, it was a bit like the mall.
The lodge, walk and quaint signage was like Hitchcock’s North by
Northwest: Bringing civilization to the wild. 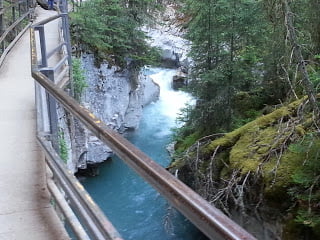 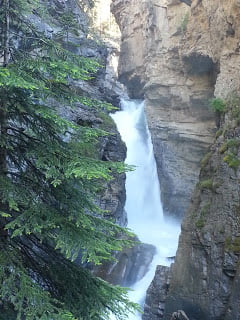 We were done and back on the Parkway in about 40
minutes.  We meandered up towards Lake
Louise, taking the exit to Moraine Lake.
It was only just past ten AM but the parking lots were full and we were
waved into a roadside spot about 15 minutes walk to the lake. We started out on
the Larch Valley/Sentinal Pass route; 11.6 kms return, 725m elevation gain. 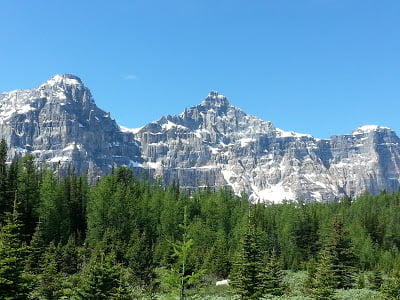 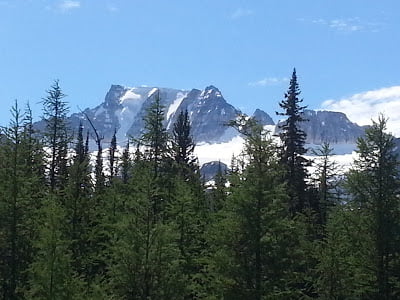 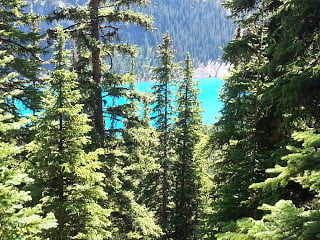 The hike started out as a series of switchbacks with some
serious elevation.  Then it opened out
onto a valley, with more moderate and gentle hiking.  Finally we came out to view of Ten Peaks.  The final portion was a glacial/slide
switchback up to a saddle of Sentinel with a view down to Paradise Valley.  Without poles and wary of the slushy terrain,
I deferred on the final km, but SS went a ways up on his own.  The valleys has a series of glacier ponds,
the Minnestimma Lakes, which made for a wonderful lunch spot looking west
towards Eiffel Peak, Northwest to Pinnacle Mountain, and east to Mount Temple. 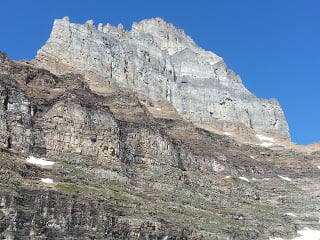 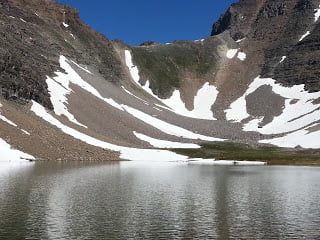 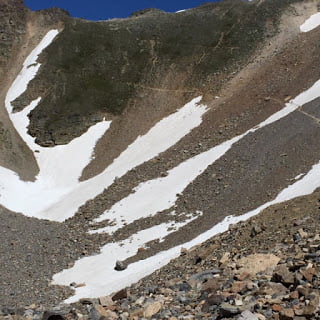 We headed back to Moraine; it has the lure of Louise with a
little more outback flair.  There were
unbelievable hordes of cars, mostly day trippers making their way along the
easy one click lakeshore walk.  We
decided to drive into Lake Louise for a quick skinny: What a mistake! It was a
total gong show, drivers like snipers and looters poaching parking spots.  We lucked out with an early departure and
snagged a spot just minutes from the Chateau.
But the hordes put us off and soon enough we were back on the Parkway for
a spectacular drive back to Banff.  The
Castle Mountain bluffs cover a third of the drive, a huge massif bordering the
eastern side.  By the time we’d walked to
and from dinner (Earls, nothing special) we’d walked 22.31 kms or 29,447 steps!  Fitbit tells us this is the equivalent of 227
floors. 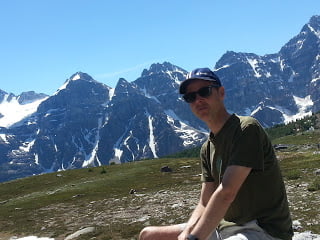 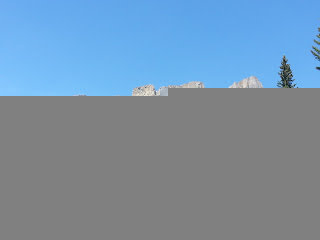 Knowing the parking situation at both Moraine and Louise, we
were up, checked out, post-Starbucks and on the road by 7:30.  We arrived at Lake Louise just past eight and
snagged a supremo parking spot.  Then we
headed up to one of the teahouses, on Lake Agnes, 6.8 km return with an
elevation gain of 385 m.  It had fewer
switchbacks than Larch Valley, some nice peek-a-boo views of Louise, then
flattened out at a small glacier lake called Mirror Lake.  From there a final, short, steep ascent to
Lake Agnes, with its waterfall teeming off in front of the teahouse, and the
huge “Beehive” behind it.  We had some
coffee and tea biscuits before taking a leisurely stroll around Agnes, but not
up the switchback to the top of the Beehive.
Then back.  About three hours of
very easy hiking.  On our way back, with
the full swing of day trippers underway, we met Japanese tourist groups in
hiking gear you’d expect to see on Everest, couples in Fendi and Prada,
unprepared for walking let alone hiking, children on Walkie Talkies, serious
hikers with bear bells, disgruntled tourists ready to return one-third into the
hike, and all manner of everything in between. 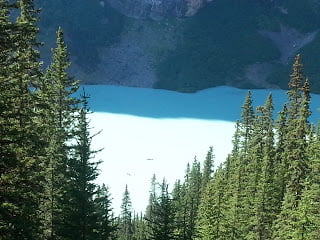 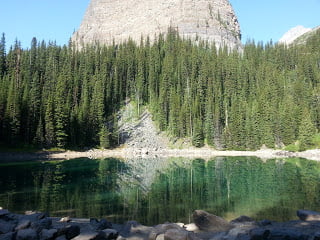 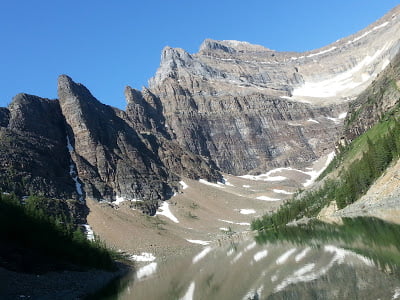 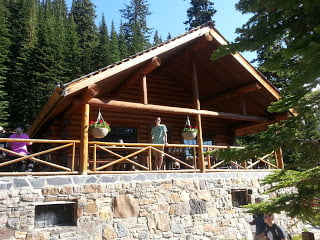 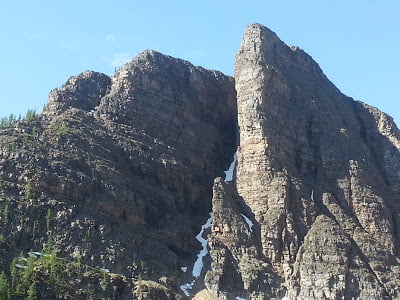 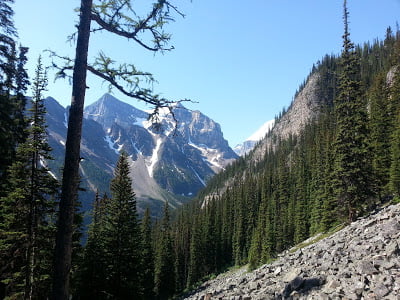 We drove back into Banff for lunch.  We thought we’d make the pilgrimage to the
Fairmont as it is a classic.  By this
point it was stinking hot, 33 or so, in keeping with the whole weekend mind
you, and we were astonished to discover that their common areas were “air
cooled” as opposed to air conditioned.
All the interior spaces were sticky and still and stuffy.  Outside, on their most spectacular deck with
a vista to kill for, no umbrellas.  Nary
a one.  So total exposure.  We traipsed down a few hundred steps (no
exaggeration) to the Bow River to the pub they have only to discover three
umbrellas, all in use, and myriad empty tables with full exposure.  “But you can eat inside” they beckoned.  Clammy like an armpit, with skin sticking
vinyl booths and a sour smell of old beer.
Well, there was one thing truly English about the experience: They were
unprepared for hot weather.
Annoyed, we climbed the hundreds of steps to parking and
drove into Canmore where we sat on a shady deck and enjoyed some lovely panini.
We hit over 24,250 by the time we got to the airport (over
18 kms walking). 159 floors, apparently.