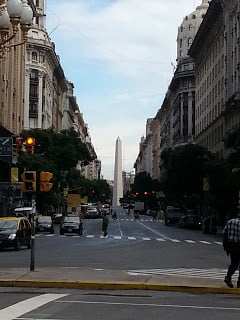 When we got up it was drizzling but humid.  After the hotel breakfast it was cloudy and
warm.  By noon it was sunny.  By mid afternoon about 26 and humid. Clouded
over for the early evening, around 22, light breeze.  Midnight, clear, 21, no humidity.  So that’s the weather: Very changeable.
We headed out towards the centre.  The only BA bucket list item, for me, was the
opera house, begun in 1888, opened in 1908, finished in 1910, completely
restored from 2001 to 2010.  It’s one of
those over the top buildings built for the nouveau riche that characterized BA
in the 19C, and oozes an over-the-top garish sensibility.  It has, however, perfect acoustics, even in
the gods.
The next English tour was noon so we decided to walk towards
the pink palace, Casa Rosada, just a few blocks away, but the eight lane boulevards
you have to manoeuvre, the traffic, the people, the sheer size of everything
here, made it impossible to get there and back in an hour.  This city is big.  Really big.
The opera  tour was a lot of fun, including the guide referring to
the fakade, the original oak floors from Slivenio and the musician Bell-ein-ee.  At one point, out of the blue, she even sang a little Rossini.
We wandered back through Recoleto, the tony city suburb,
took lunch on a patio which bordered a small park, and wound our way back to
the hotel, partly on foot, partly on the Subte (the subway is about 25 cents, a
trip, any length), and had an early evening siesta.
Dinner was a trip, literal and figuratively, so I’ll make
that another post the non-foodie can skip.