We have another day here but decided to have our last big dinner the night before at Hernan Gipponi`s restaurant in the Fierro Hotel. We were going to spend our last four nights there but it was much easier to use the left luggage facility at the Glu.  Gipponi is another local chef who was up in Montreal at the Lumieres, the big Canadian gastronomic festival I`ve never heard of…  They have a tasting menu, five, seven or 10 items.  We took the seven items for about $40 Canadian.  Awesome value.  For the same price in England you could have fish and chips. 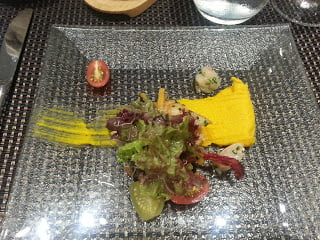 Here lies some citrus marinated prawns nestled under a salad on top of a pumpkin puree.  A whisper would have blown it off the plate. 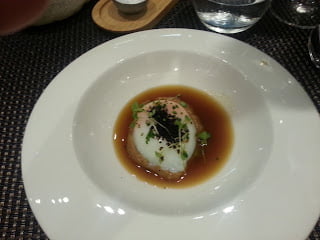 A dish of many miracles: A sous vide poached egg, cooked to perfection, on a puree of caramelized onion, topped with some charred grilled onion and then a hot onion broth.  These are the sorts of crafted dishes that can only be prepared by skilled chefs with both talent and timing.  Reverence. 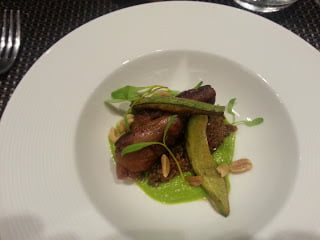 Veal sweetbreads, an Argentine specialty.  I debated switching it to the grouper.  SS ate it all and loved it.  I liked the dish overall, the zuchini and zuchini puree, the special peanuts from Cordoba, I lapped it all up with bread, but I wasn`t fond of the texture of the meat. 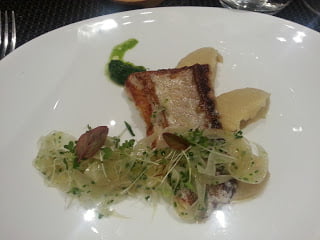 Sole.  Fried sole.  Plus a marinated young fennel that was so soft you could cut it with a spoon and the vinegar had reduced the pungency.  Smoked potatoes, mashed or pureed, artfully arranged under the fish.  And something else.  It got complex with the language.  Really good. 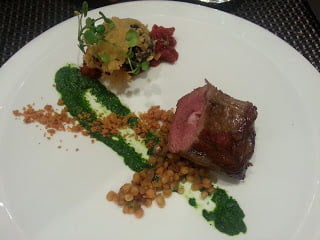 Ridiculous.  Ostensibly, lamb.  And that was good.  As were the marinated  lentils underneath.  And the salsa which escapes me as does the nutty crunch which intersects all the flavours.  Then there is that crispy clump on the side with a sweet house relish below.  That is blood sausage.  And it was so good, so scrumptious, so appealing, I can only call it a donut.  It was very lightly fried in a batter and fell apart with your fork.  The relish was a magnificent counterpoint.  Exceptional. 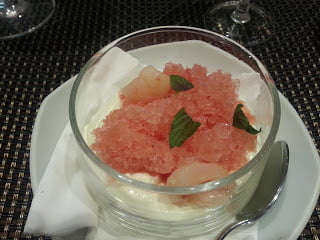 Watermelon, Campari and lime granita, tart.  Lychees, sweet.  Bed of whipped mascarpone, rich and sinful.  A few exotic extra potent mint leaves for a burst of green. This is why people don`t diet. 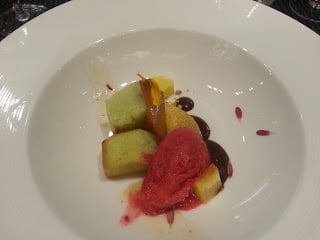 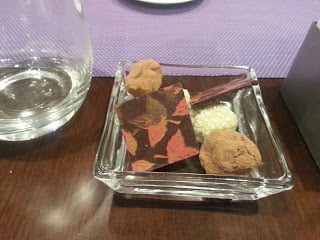 And then a few bon bons with coffee.  Nice walk home, about 21 C.