Two days in Iguazu, nothing about the (silly lyrics but extremely catchy) TLC song… 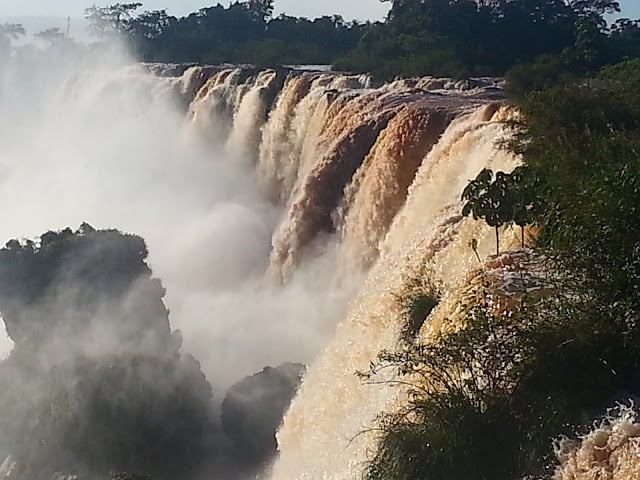 SS got up as if it was a workday: 6:30!  Just over an hour later we were in a cab to
EAP, one of two BA airports (their waterfront is an expressway, an airport and
another expressway…).  It was a glorious
day, blue sky, warm, light breeze.  Plane
was packed, we were on Aereolineas Argentinas, the only flight we’ve had to
shell out for this trip.  Economy, but
row five.  We even got a box with
so-called snacks.
Iguazu (spelt various ways whether in Spanish, Portuguese or
a literal translation) lies on the northern border between Argentina and
Brazil, not far from Paraguay.  The guide
book claims that when Eleanor Roosevelt saw it she whispered “Oh, poor
Niagara.”  It is quite a site. 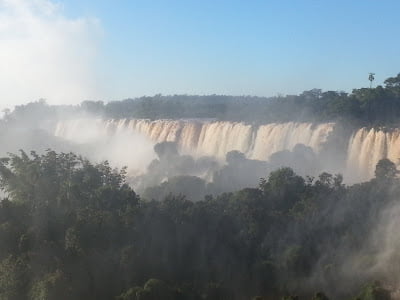 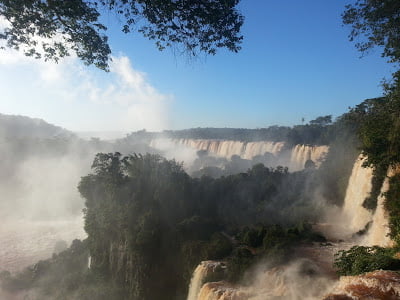 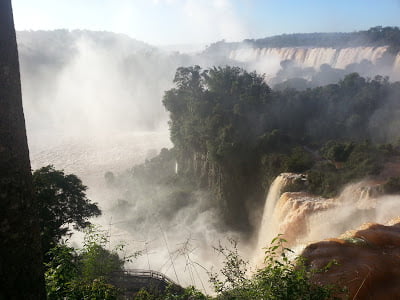 The guide book stats: Up to 300 individual waterfalls,
depending on the time of year and water levels, the highest around 270
feet.  The largest area, a u-shaped
falls, called the Devil’s Throat, sits deep in the jungle with San Martin as the major view falls; the horizon is nothing but water and incomparable.  In the world,
the falls with the greatest “flow” are Niagara, Iguazu, Victoria.  Iguazu is one of the (highly contentious)
“modern” 7 Wonders of the World, of which I’ve been to three, SS to two (the
Amazon, in Venezuela, Iguazu falls and Cape Town’s Table Top mountain); I will
never visit Indonesia’s Komodo Island thank you.  I’ve also been to some runner-ups including the
Dead Sea.  The only Canadian finalist was
the Bay of Fundy.  Go figure.  Oh, also, Roland Joffe’s rambling film The Mission was shot here (it tells the tale of Jesuits trying to build a mission and the conflict with slave traders, etc.).
The jungle setting is much hotter than BA, around 30C on
arrival, but curiously less humid.  We
have two days, one night here, on points, in the Sheraton.  It’s the only hotel actually in the park (the
government owns it and leases it to Sheraton; it is essentially a ticket to
print money).  I don’t have a lot of
wonderful things to write about it except this: The setting is over-the-top
spectacular stupendous.  When you walk
into the lobby, at check-in, you see the falls immediately, in the distance,
the rain forest off to the side, the pool positioned on a bluff before
you.  Of course we don’t have a terrace
room, overlooking the falls, we’re on the jungle side, but thems the breaks.
Following four pics: Bossetti Falls 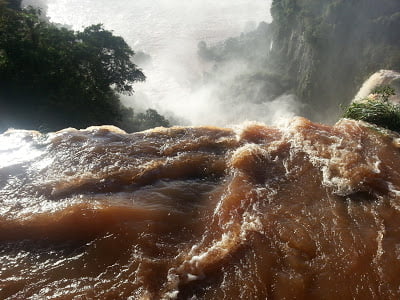 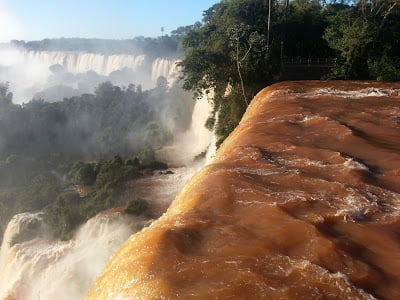 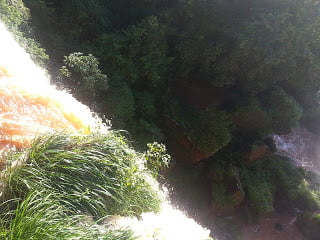 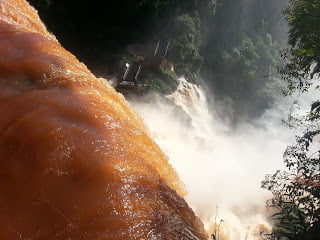 We basically dropped our stuff in the room upon arrival
midday (1.5 hour flight from BA) and headed straight into the park.  I had on dri-fit, prepped for getting soaked,
but in fact we never did.  There is an
upper route of about 650m that goes along the very edge of the southern
portion, branches right into the falls proper, much closer than you would imagine.  The lower route, longer and with quite a
descent, drops to the base and gives you an opportunity to be drenched in the
spray.  You can also take a speed boat
into the falls (we didn’t) and/or cross over to Brazil, where although the park
is less developed they have a slightly better view and the opportunity for a
helicopter tour.  As a Canadian you would
pay a fee to enter Brazil plus a fee to enter the park and then a fee to return
to Argentina.  So pass.  After doing both upper and lower routes,
navigating the hordes (and this park is how I imagine Grand Canyon is in the
summer, teeming with tourists, except we are all corralled onto narrow
walkways, so dense and slow like rank and file in a factory) we returned to the
hotel.  A short siesta, an afternoon
under an umbrella by the pool, and reading.
Now this is what I call a vacation!
Following three pics: Early morning mist at Adan y Eva Falls 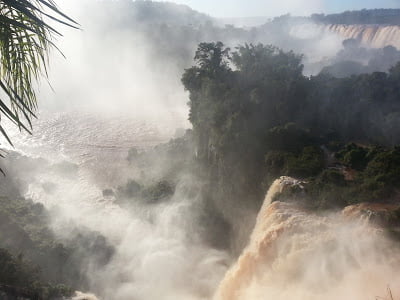 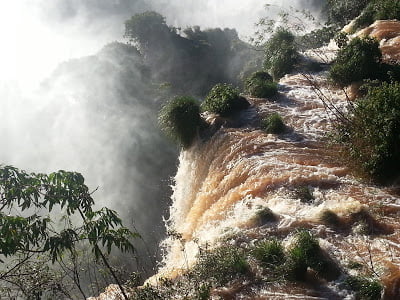 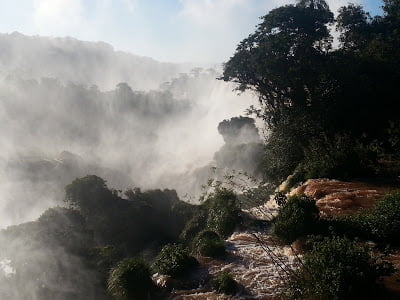 When I did Angel Falls, you had to fly in to see it.  It’s a classic “long drop” falls. While
majestic, and of course huge (the world’s tallest), Iguazu is all about volume.  Tons and tons and tons of water pounding over
the Rio Iguassu, like two or three Niagaras because of the terrain, the cliffs,
the jungle, the breadth.  Forty years ago
it was clear, the water. Deforestation has changed that.  But still…
As I write this, from the veranda off the Sheraton foyer, you can see
the steam rising up and the sun setting on the Brazilian side and the toucans
harping in the treetops.
That’s right: A first for me.  Toucans outside of a zoo.  I spotted a solo beaker flop by the pool
looking like a Disney dinosaur; friendly, unlikely to be airborne, one-third
body two-thirds beak.  Then I saw a few
more.  Then I went over to the patch of
mature bamboo where a flock was roosting for the night.  Like parrots they make quite a ruckus.  We also saw plenty of Coatis, scrounging in
the park (like fancy racoons) and exotic birds with plumes and eyebrows and
colourful feathers. A warning in the room reminds guests to ensure the sliding
door is locked when not in the room; good advice.  Several times in the afternoon we witnessed
monkeys clamber deck to deck.  They
recognized a closed slider from one ajar and at least once we witnessed a
little feller enter a room. 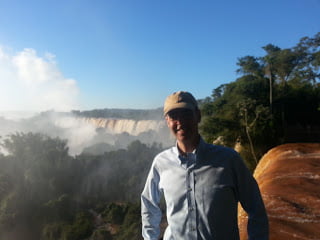 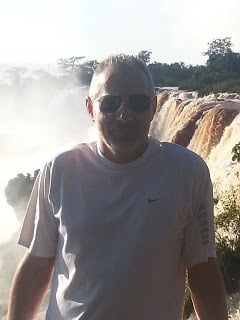 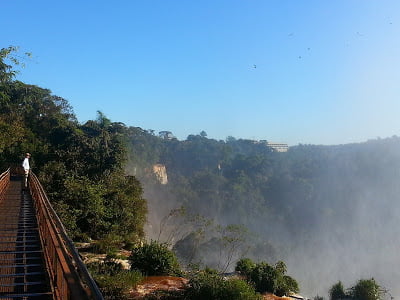 Dinner was a tad formal in the classic hotel way, but
good.  The highlight was a dulce de leche
mousse with caramel sauce, berries, and served in a dark chocolate cup.  Then, by chance, I checked my “device” about
our flight the next day and it turned out our return flight was on October 27,
not March 27.  That was a bit of a panic!  No need to relate the long and tiresome
process of dealing with Areolineas Argentina (or not dealing with them) and of
course the fee to change the flights but we managed it and got a good night’s
sleep.  So the “free” night at the hotel was pretty much negated by our flight SNAFU… 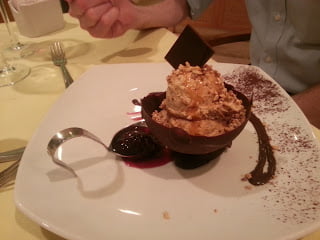 On day two we did something really smart: We got up early
and went into the park just before 8 a.m.
when it “opens” to the public.  And
you know what?  We were all alone.  No tourists, no groups, no tours, no
staff.  There was flock after flock of
green parrots, a few toucans, and all sorts of other exotic birds, and you
could look up, and walk looking up, without running into anyone.  We went all over the upper level with nary a
soul.  The sun was breaking over the
jungle treetops, the mist floating into the sky, a light breeze, it was beyond
magic, really, really special.  SS went
down the lower route alone where he saw some rangers, clumps of wild orchids, and
I checked out a few paths to nowhere.
Pics of and around San Martin Falls 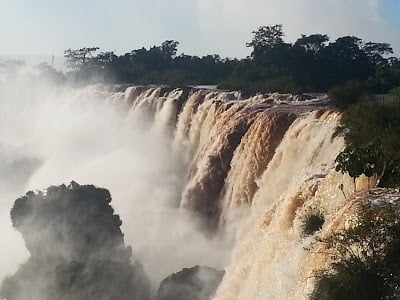 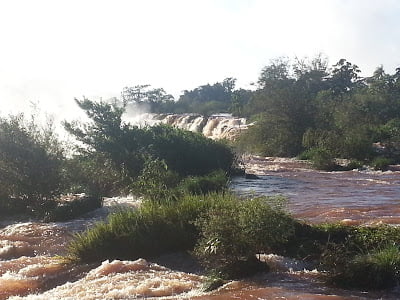 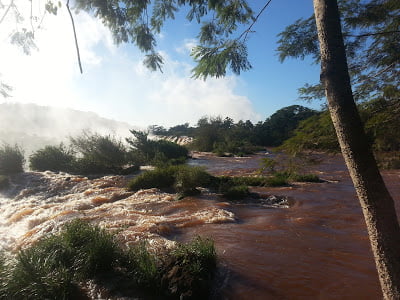 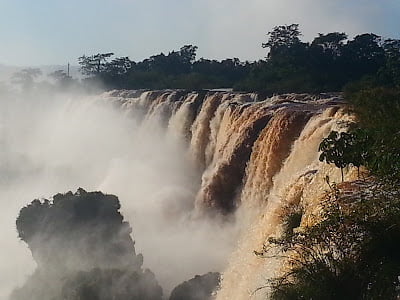 Then we took the breakfast buffet, included, pretty swanky
as these things go, packed, checked-out, left our bags, and went back to the
pool for four hours.  Hotter today, dry
heat, like Palm Springs heat.  Read,
swam, shaded; time flew.  I started a
Malcolm Gladwell book beside the pool in which he describes having to “feel”
like the people he writes about and how when JFK Jr. crashed he went through
something pilots call “losing the horizon” whereby he thought he was flying
forward when in fact he was in a nose dive in bad weather and didn’t realize it
until too late.  So the only way to
“feel” that was for Gladwell to have a pilot take him up, in the same type of
aircraft as JFK was flying, in the same sort of stormy weather, and to
purposefully engage in a nose dive.
Airport late afternoon, bit longer on the flight home, and of course all
I could think of was Gladwell “feeling” what JFK did…  The worst part of it is this: In 1999 a plane
crashed at the city airport in BA.  It
was I think the worst air disaster in Argentina’s commercial air industry.  I guess that’s neither here nor there, but en
route to and from AEP you pass a wrecked plane, a monument to the crash.  Aren’t monuments meant to be symbolic, not
literal?  The 9/11 monument isn’t a tower
with a plane stuck out of it.  Anyway, a
wonderful 72F no humidity clear blue sky early evening awaited us.  Back to the Glu for four more nights. 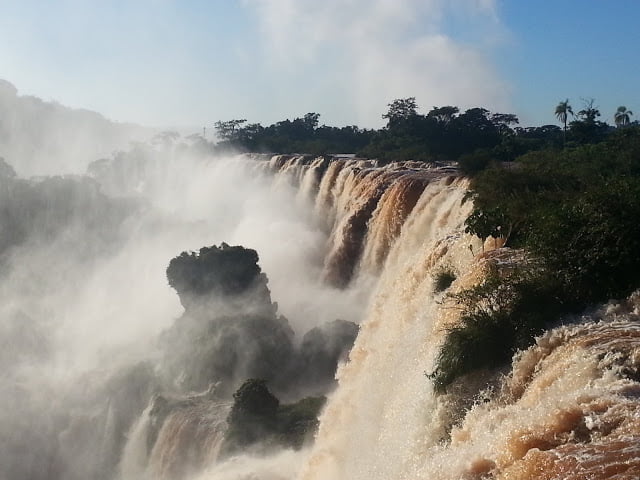