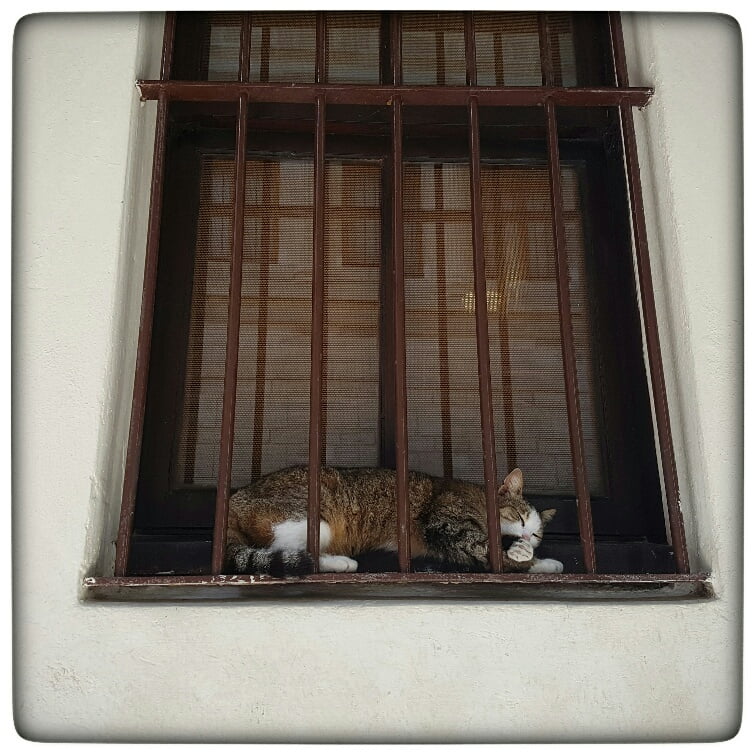 Feral cats are to Istanbul what vending machines are to Tokyo. 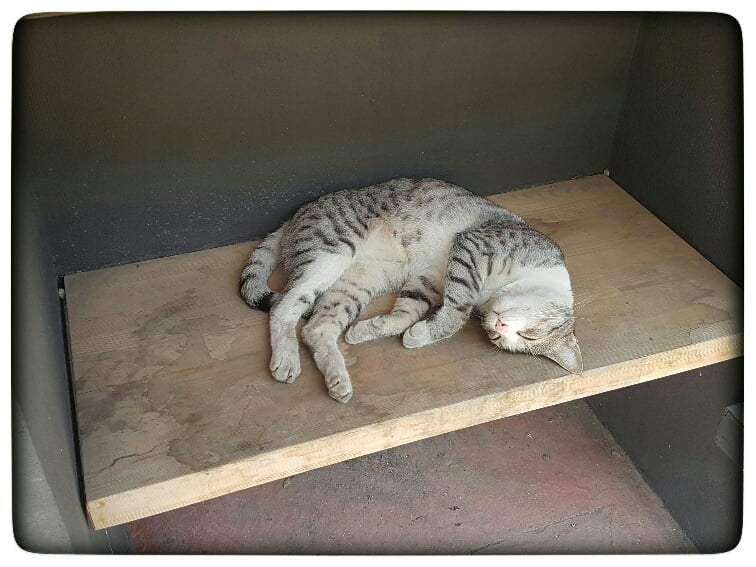 Today after breakfast we returned to Sultanahmet to the Topkapi Palace, the royal residence of sultans for over 400 years from the mid-1400s to the mid 1800s.  SS steered us well, avoiding the crowds at the main entrance by starting in the harem. 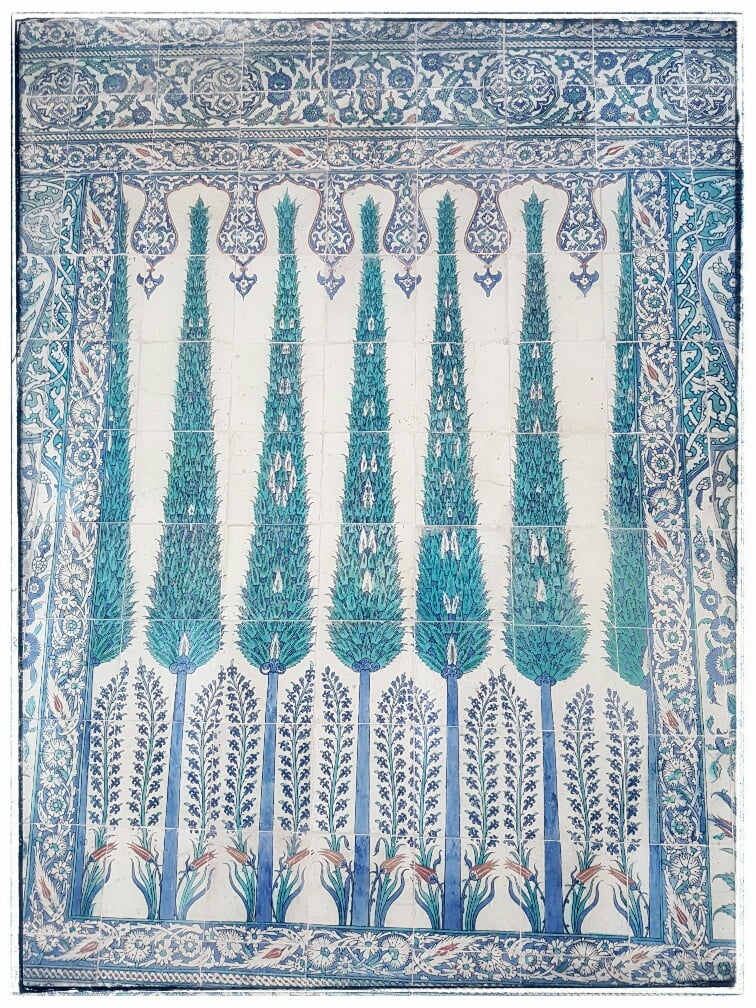 Sample tile work in the Hall of the Eunuchs, where they guarded the harem. 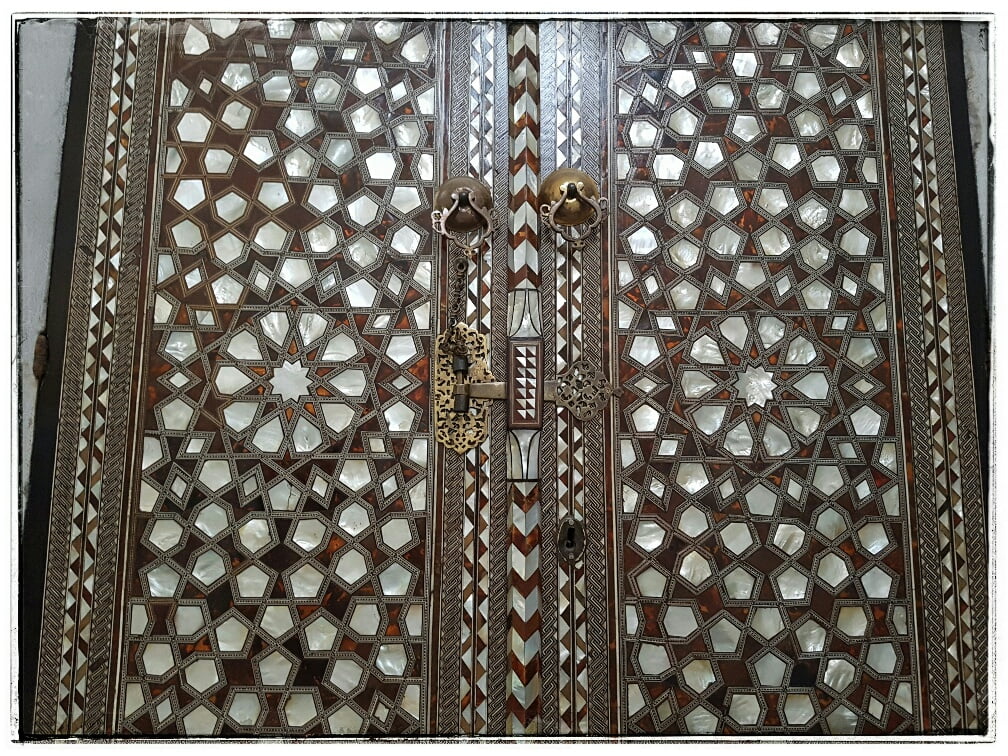 Cupboard inlaid with mother of pearl. 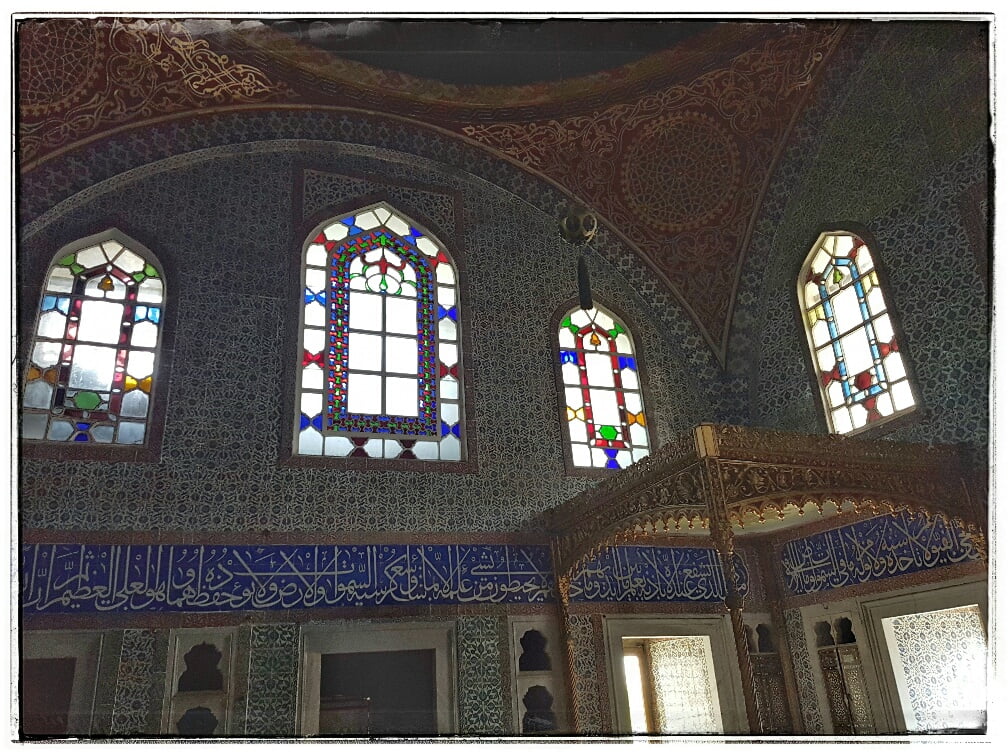 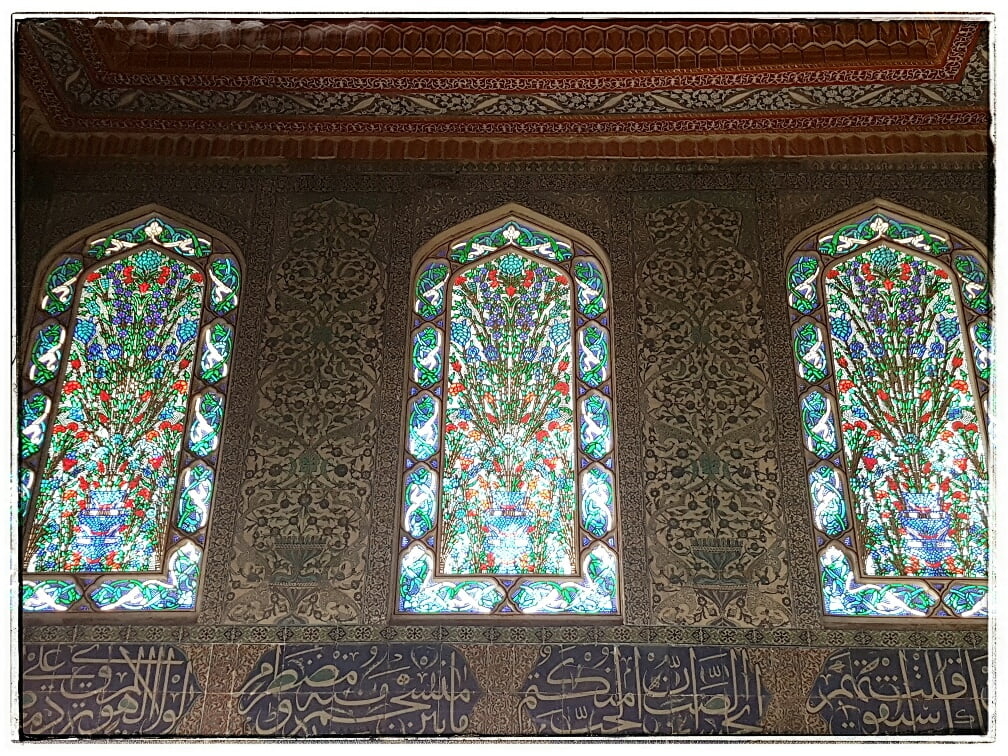 If you’re stuck in a harem, hopefully you’ll have decent window treatments. 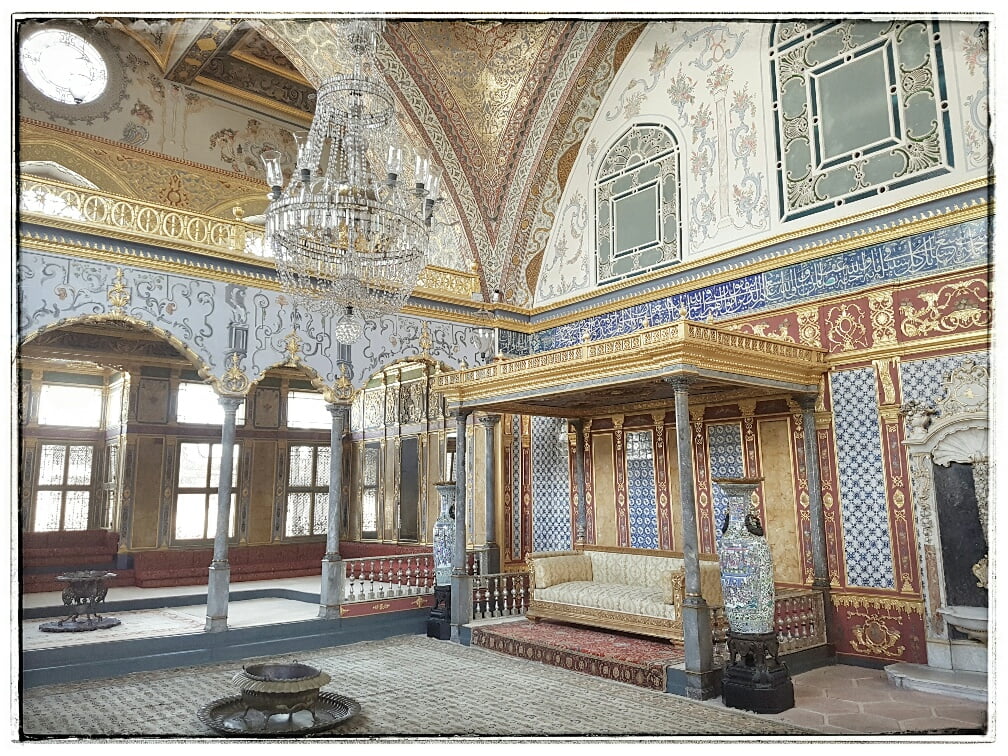 Imperial Hall, somewhere to hang with the wives. 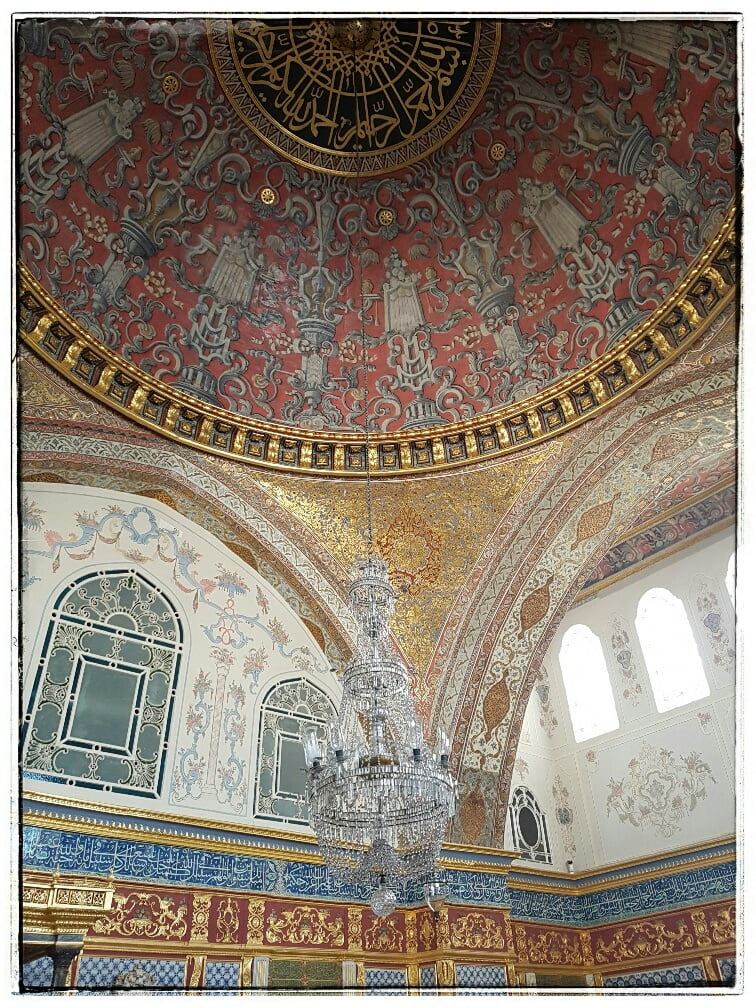 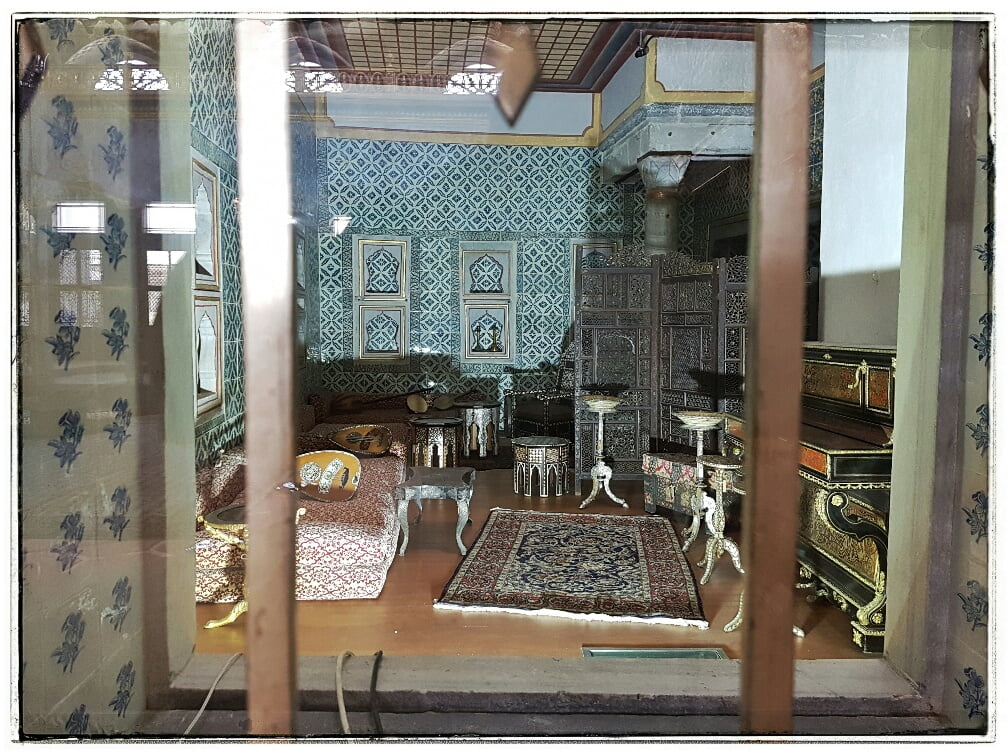 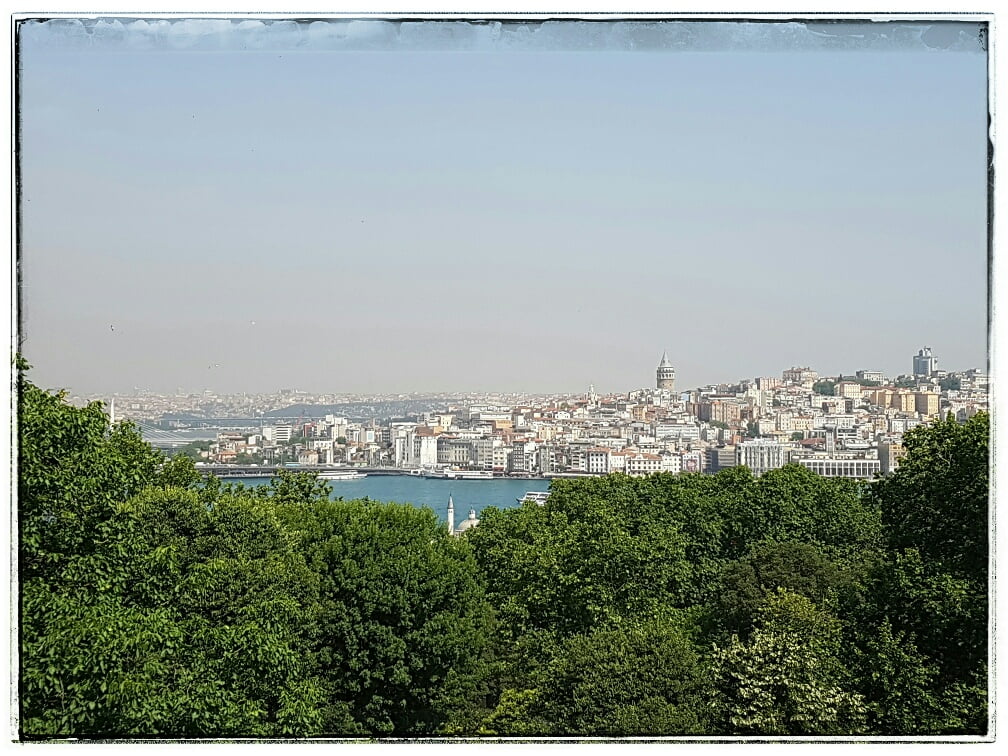 View from the harem’s “Courtyard of Favorites.” The domed building is the Galata Tower, not far from our hotel.  The garden here was home to many birds, particularly kites, swallows and green parrots. 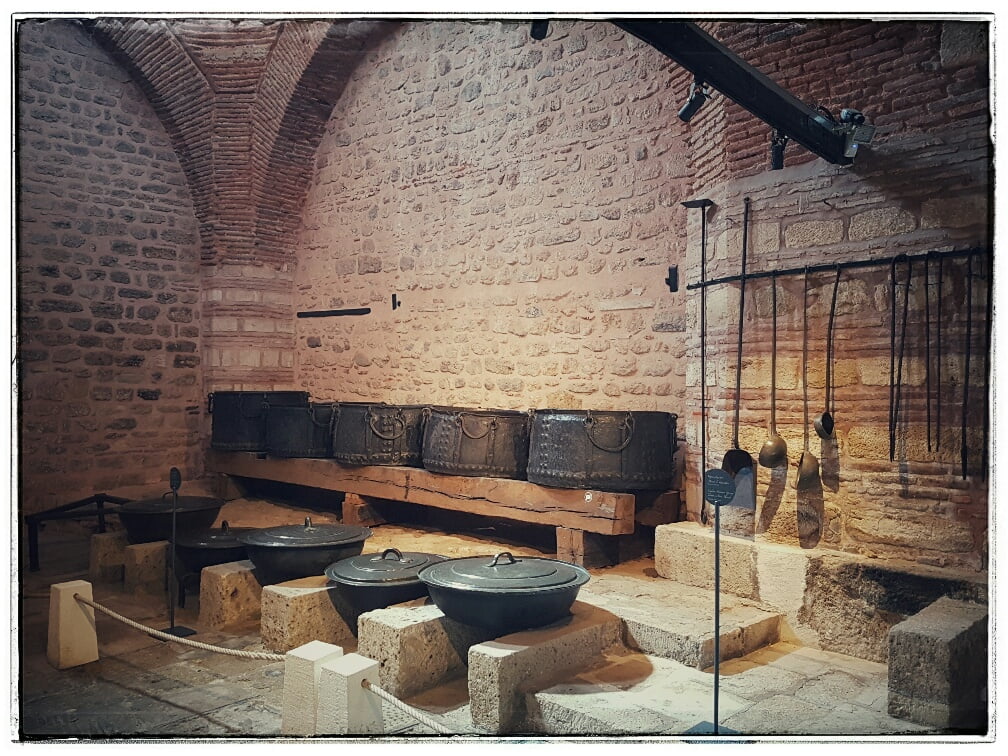 A long series of kitchens ran down one length of the palace, not unlike stables.  This particular picture is the confectionary kitchen.  Just confections. 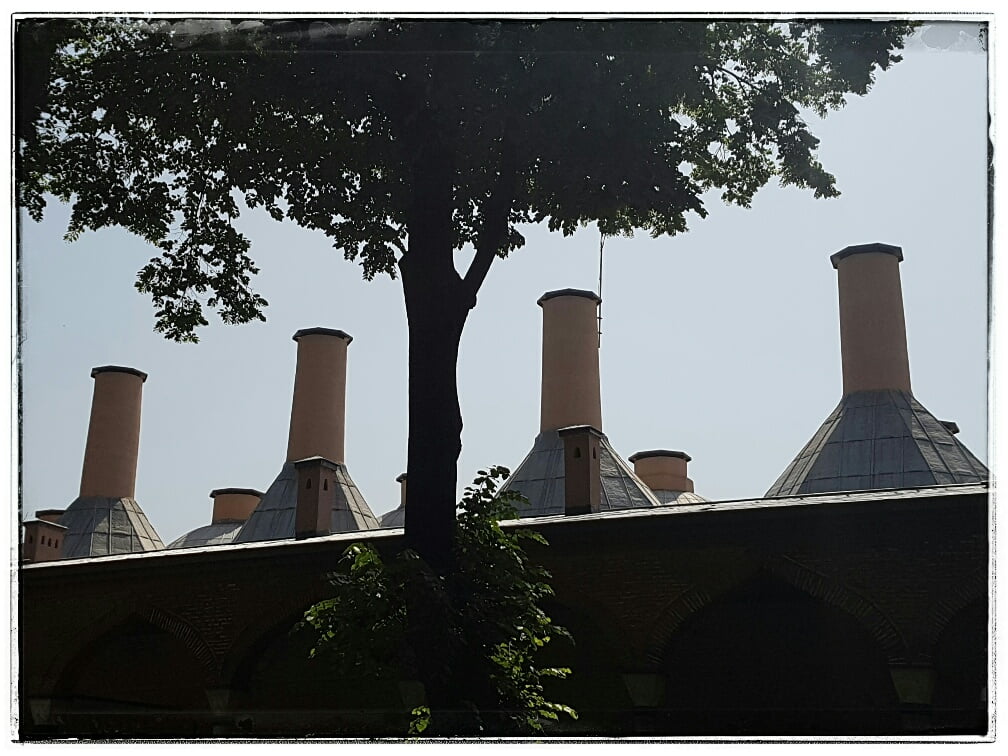 A snapshot of some of the various kitchen chimneys. 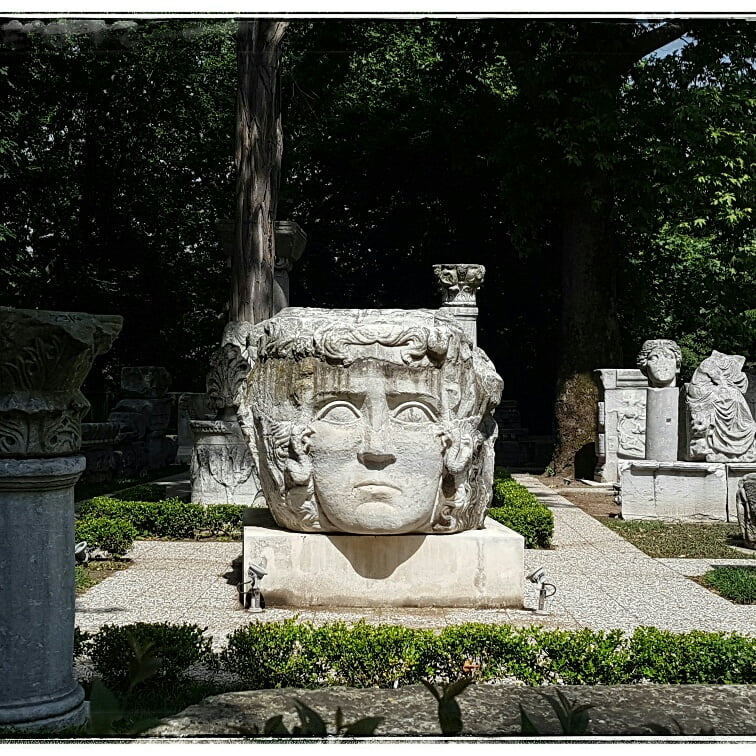 After the palace we walked down the hill to the three archaeology museums.  There was a well-preserved Medusa in the sculpture garden. 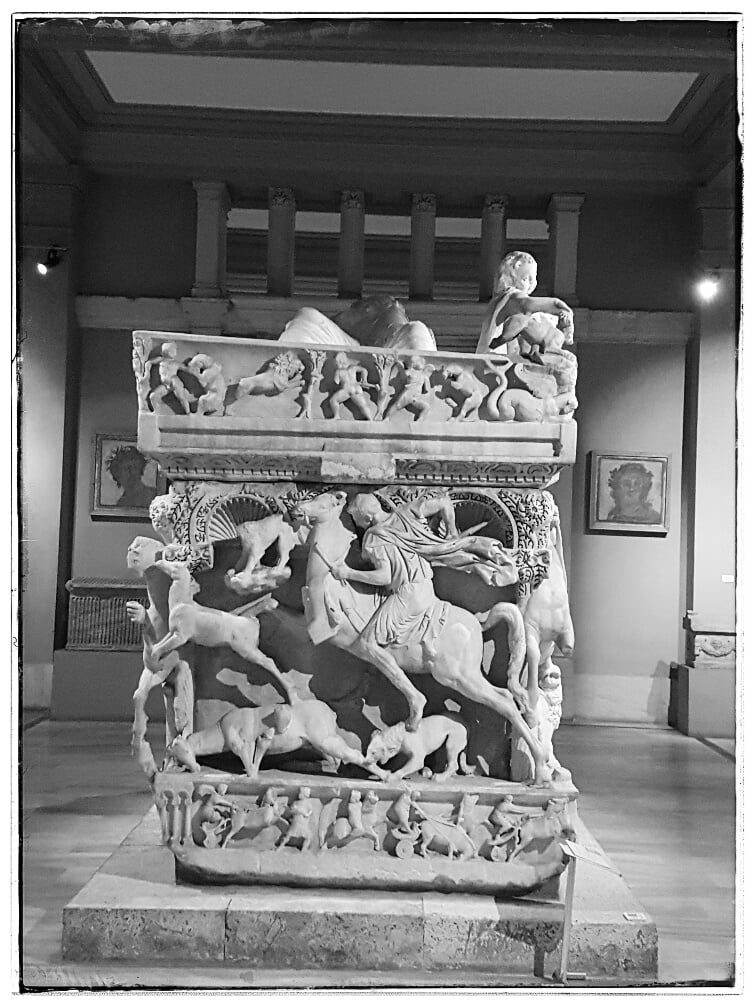 A mammoth Roman marble sarcophagus from circa mid-300s AD. 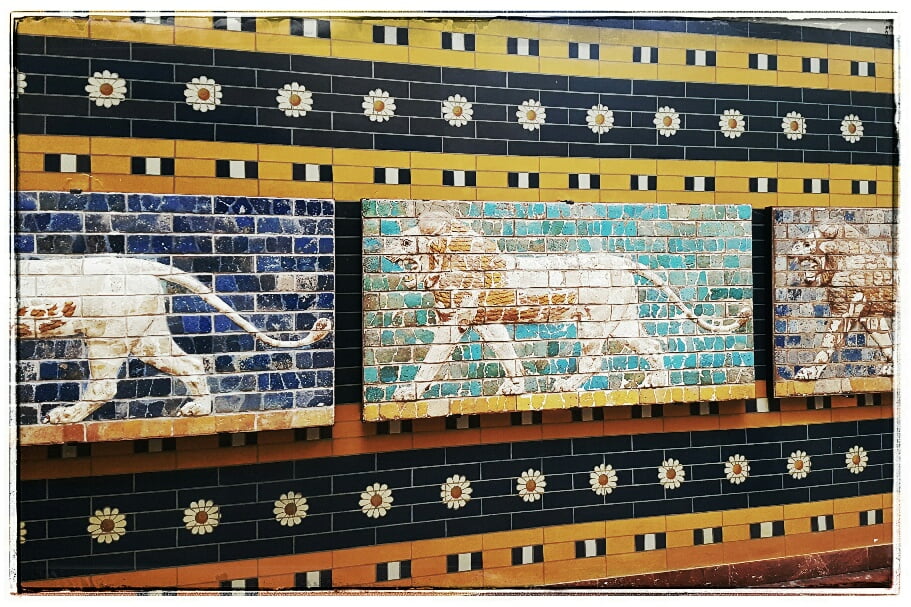 These lion mosaics once ran along the procession street in Babylon during the reign of Nebachudnezzar, circa 604 BC. 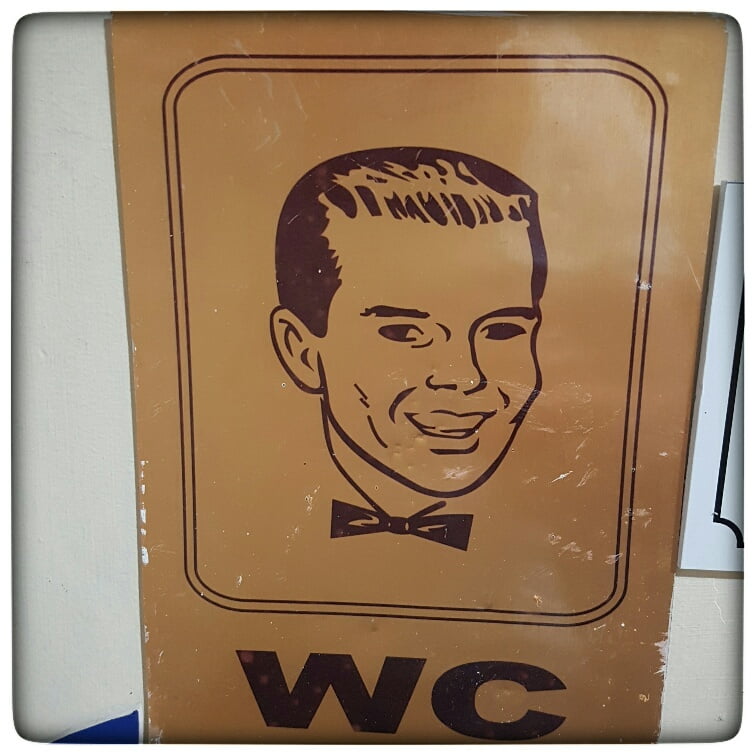 After our morning of culture we walked across the Galata bridge, which crosses the Golden Horn, and took lunch at a very cool cultural centre called SALT Galata, which was sort of Dean and De Luca ish, and run by servers who shared their youthful disaffection for serving with aplomb.

Following lunch we took the tram as far as it goes, then walked about a click to the Dolhembace Palace.  Built in the mid-1800s, the sultan moved his family (and harem) here (probably just to keep up with the Czars and other European royalty).  They did not allow photographs of the interior, which were teeming in gilt, Baccarat crystal, elaborate parquet and monumental carpets.  One stairway was crystal.  The CeremonialHall had a crystal chandelier in excess of four tons and a hand woven carpet 124 sq meters huge.  It was somewhere between Cinderella and Liberace, with neither side of that meter too complimentary.  But its setting, on the shore of the Bosporous, was magical.

In the morning I’d said to SS, well this is the first and last time I’ll ever be in a harem.  Wrong.  We did the tours of both the “public” palace and the harem, where the sultan’s mother, up to four of his wives, and any sons not yet circumcised (for which it was custom to wait until eight or so) would call home.  At one point the tour guide asked SS “Where are the wives?” 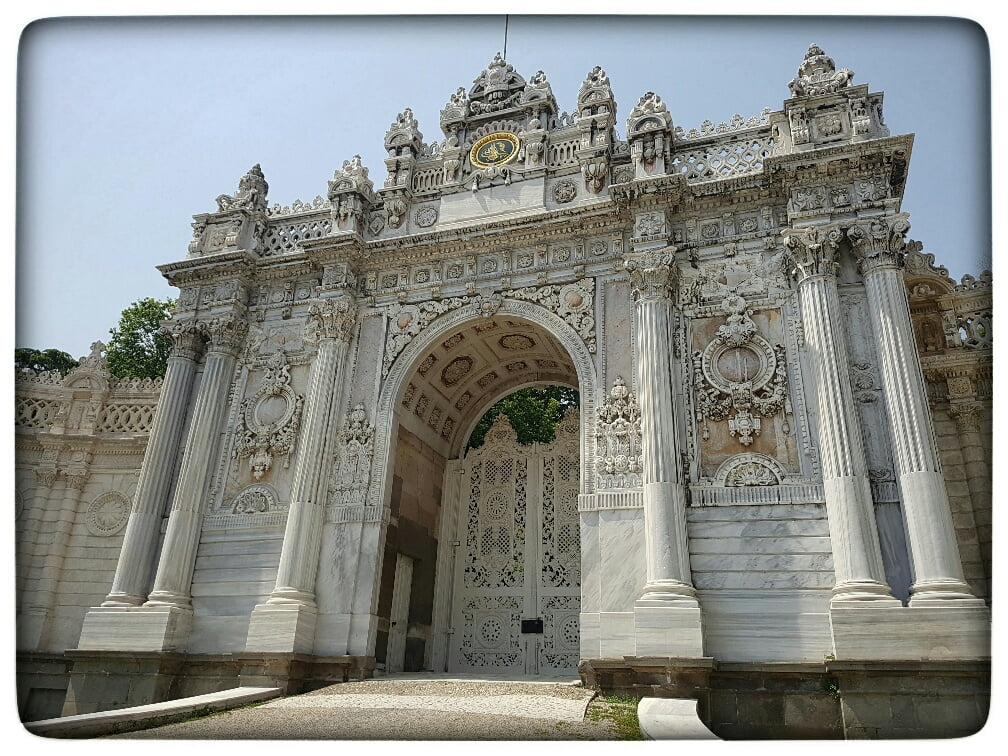 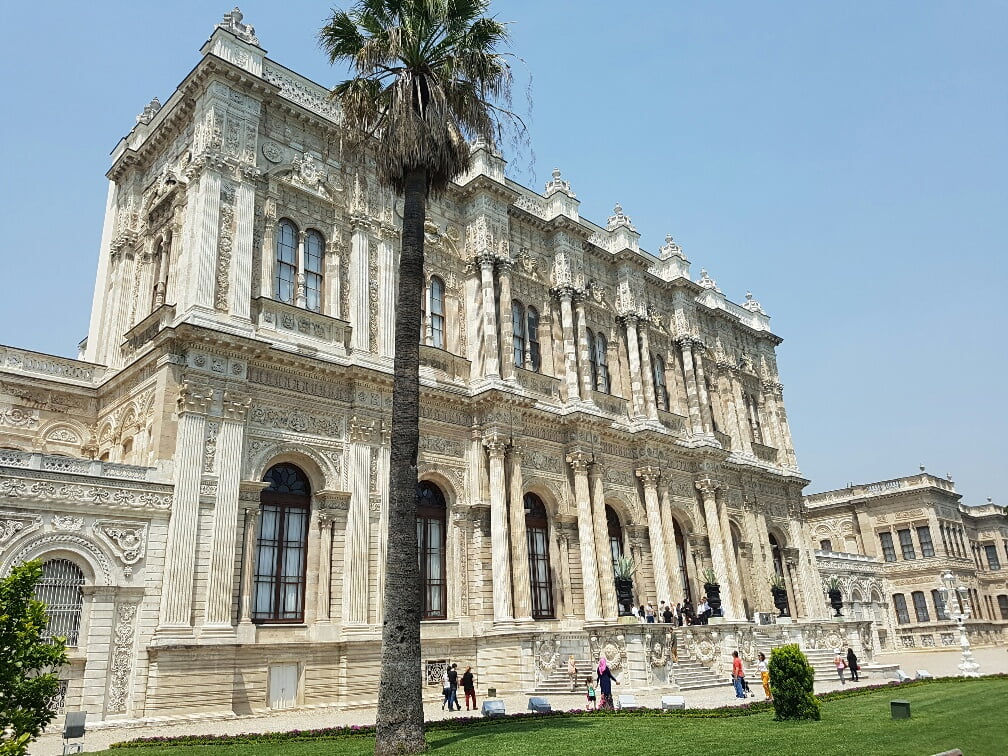 Entrance to the main palace. 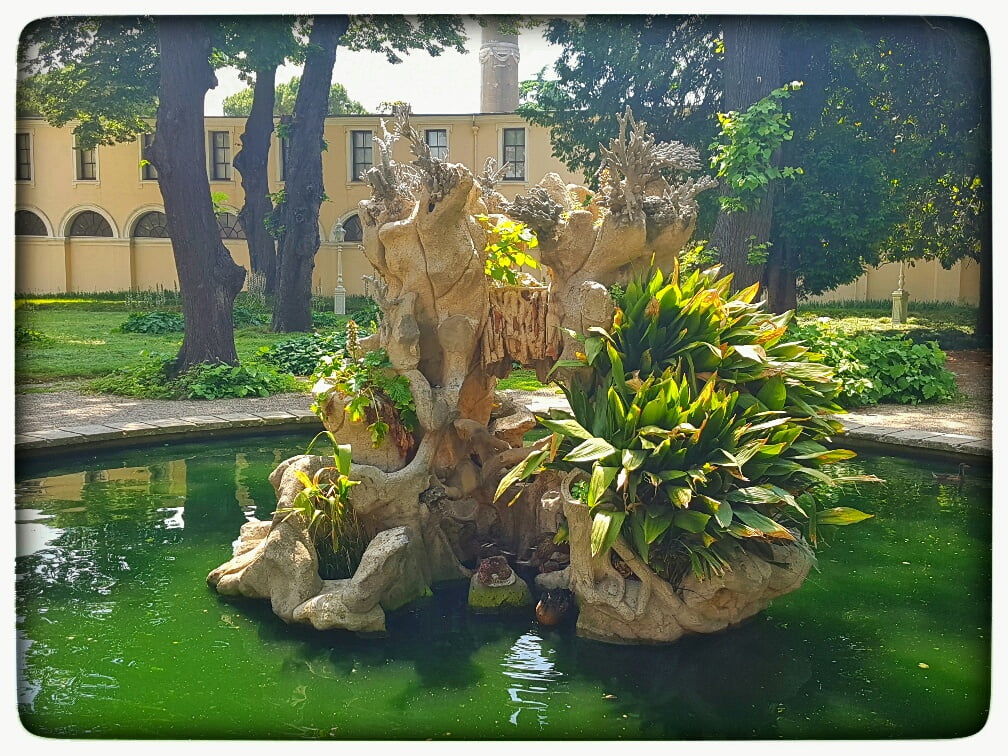 Afterwards we climbed the steep hill from the Bosporous to our hotel.  Another incredibly hot day, we were dripping upon arrival at the Ravouna.  Over 20,000 steps in less than eight hours.

After a short siesta we headed out to dinner to a local “recommended” place called Yolu Lokanta.  We had about seven mezze, all spectacular, while a local couple with a Border Collie dined inside the restaurant and the dog, at the door (reticulated, open wide in the heat), inched its way inside, slowly sliding its bottom an inch at a time; over and over; I am over smart dogs! 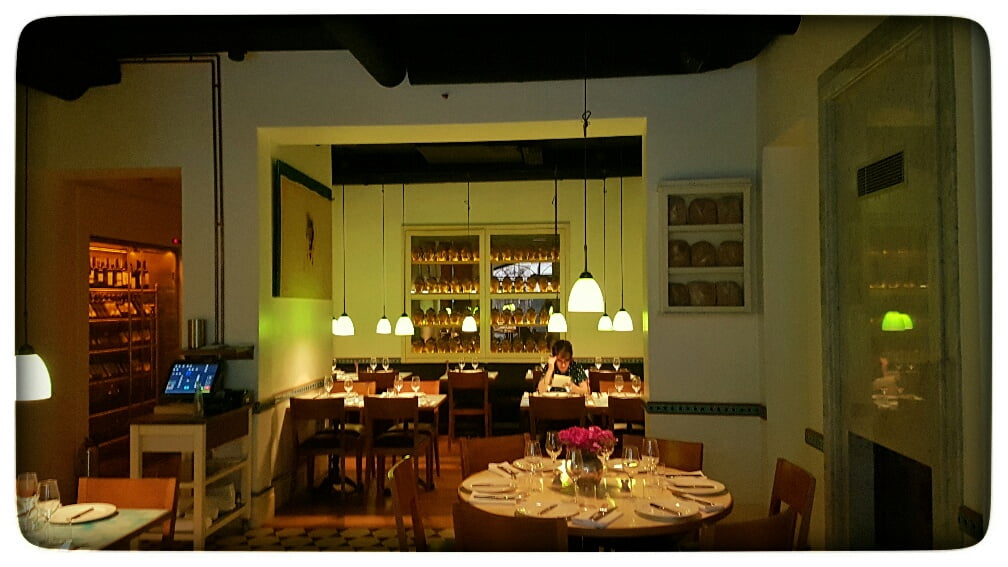 A neighbourhood place around the corner from our hotel, Yolu Lokanta. 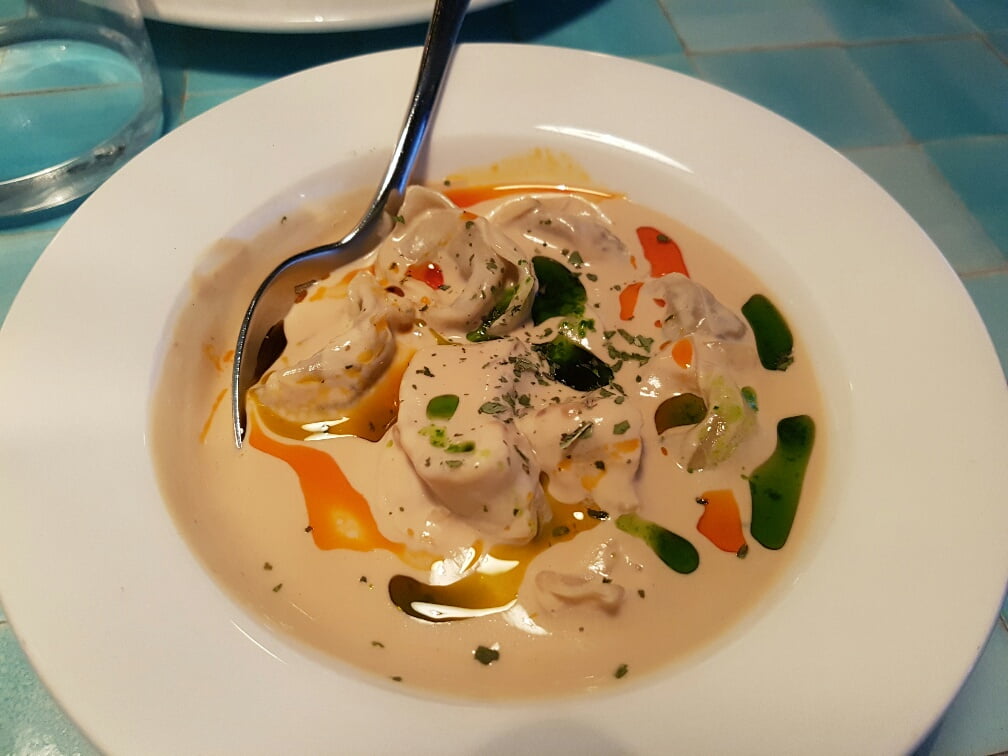 It doesn’t look good, but it was: Pasta in a sour yogurt; the green is mint, the red is red pepper.

After dinner we checked out the roof terrace on Ravouna.  It was full of diners enjoying table service.  The sea breeze was amazingly therapeutic, the glistening lights magical.  I’ve been saying for months that Istanbul is a city of seven million.  Turns out I was half right: It’s a city of 14 million.  We enjoyed the view and the fresh air, then one floor down to bed. 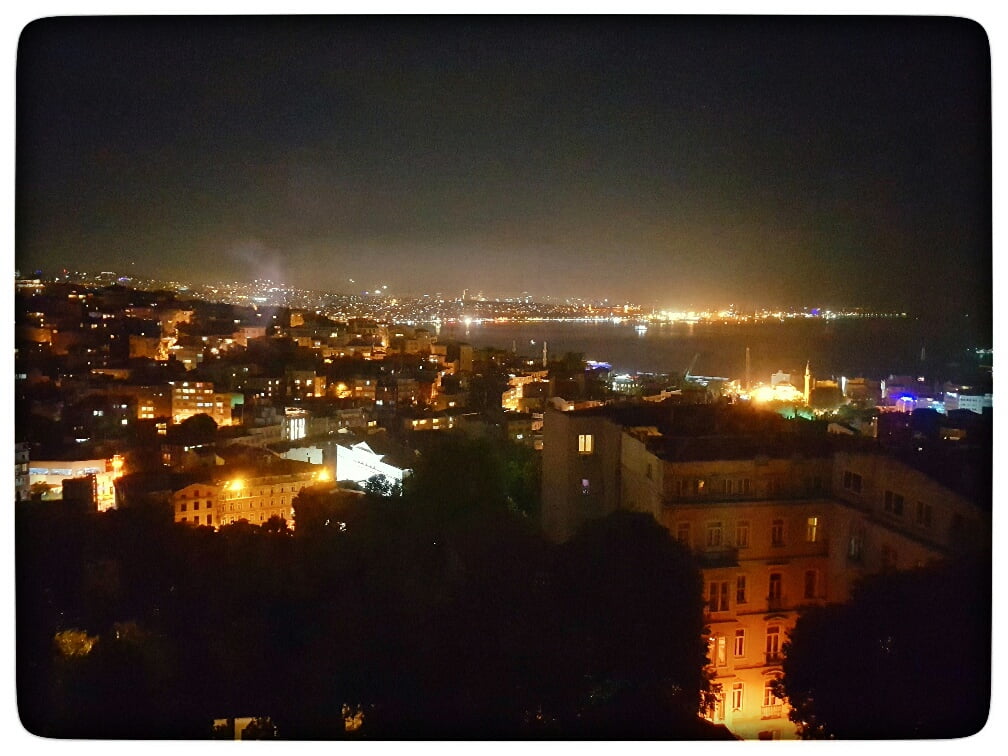 View from the roof terrace at the Ravouna 1906.