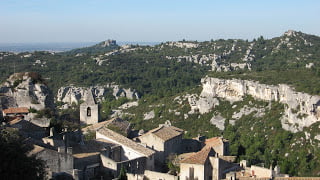 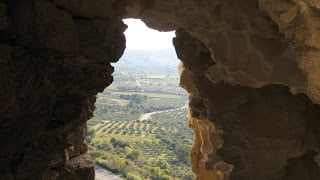 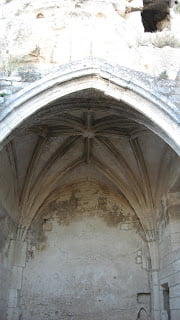 Stupendous day.  Early to Les-Baux-de-Provence, an ancient settlement on a limestone “mountain” overlooking the Val d’Enfer in western Provence.  It is a walled, cobblestone town, with no cars, so we parked at the ring road and walked up.  Although they have discovered human settlement in the area from 600 BC, the Chateau or fort sits along the southern promontory built on a fortress established in the 900s.  Lore has it that the original duke was a Balthazar, directly descended from one of the magi.  The fort has many medieval weapons on display, including classic battering rams and catapults.  The sun was out in full force but there was a strong and bitter wind; we were early and alone up at the top, with only the whistling wind through the stone remains, which at times when we wandered apart had an eerie solitariness.  There were crumbling towers from the 13thC, chapels from the 12thC, but enough of the walls, stairs and shape of things to imagine the 4,000 people who once called it home.

The village was interesting too, quaint and tourist-oriented but oozing charm.  We had a coffee late morning then moved on to St. Remy de Provence.

It would take a hard heart not to immediately fall in love with St. Remy and to plan out where, close by, would be the best place for your villa.  It has less of a tourist focus than Baux but with fascinating ancient ruins and winding medieval lanes, exquisite shops and restaurants and many realtors with English signs.  [PS: We have decided to not come back to Vancouver.  Please ship the dog over UPS.]  We stopped at a number of windows, artisan boulangeries, chocolate makers, yarn shops, but couldn’t resist spending money at a candy/cookie maker, Le Petit Duc.  We also liked the church, despite its recent lineage (early 1800s), with fading frescoes and pantheon-like nave.  We took an inexpensive lunch in a pleasant little Vietnamese restaurant.

After eating we explored Glanum, a Roman archaeological site just outside St. Remy.  Up until the 1700s, the site was simply two well-preserved arches, called The Antiquities, which scholars and tourists came from across Europe to view and study.  About 150 years ago archaeologists discovered that the arches were part of an ancient city.  It turned out that the city began around 500 BC (Gauls), eventually being developed full on by the Romans, who built in wells, sewers, baths, and elaborate public spaces.  Of that ancient Roman town, the layout is in surprisingly good knick, but only a few columns, from one of two ancient temples, survive intact.  After about 300 years of development under the Romans, it was abandoned as Gauls, Saxons and Franks attacked.  We had a wonderful timet here, exploring and discovering the various nooks and crannies and views. 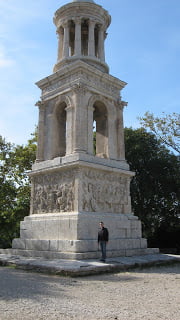 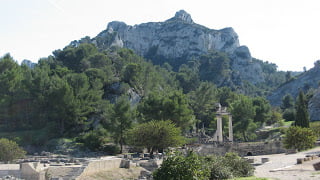 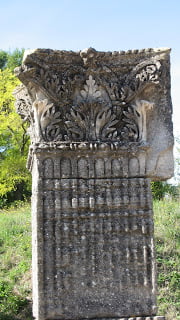 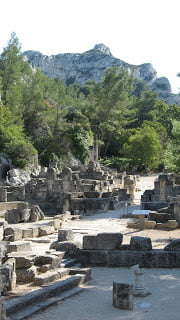 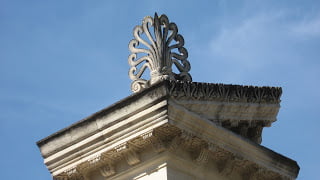 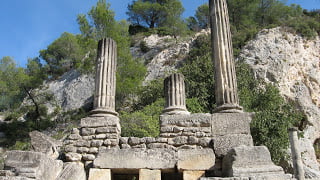 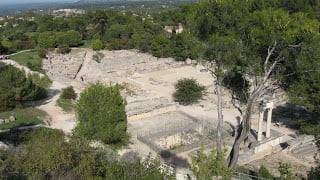 Afterward we drove southwest towards Arles and stopped at Montmajour, the Saint-Pierre abbey founded in 948.  We were virtually the only tourists.  It’s a bit off the beaten path but well worth a trip.  Initially it grew up around stone graves monks created for locals, eventually developing into a large abbey which exerted control over the valley all the way south to the Mediterranean.  Sold after the revolution and, as per Cluny, used to some extent for masonry, it wasn’t detonated though and much of it remains intact, although by the time restoration began in the 1840s, the west half had to be rebuilt (and was done so in a different style).  Despite being a fraction of the size of Cluny, the nave—at 16 meters—was awe inspiring.  We climbed the 125 steps to the top of the tower for a stupendous view, from Arles to Tarascon to Baux.  It is, not surprisingly, a UNESCO World Heritage Site. 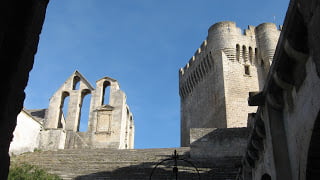 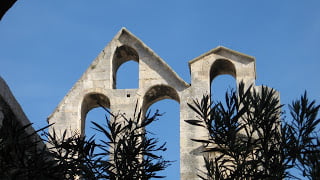 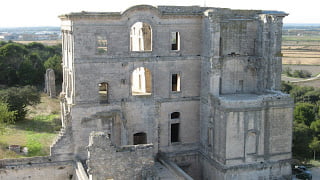 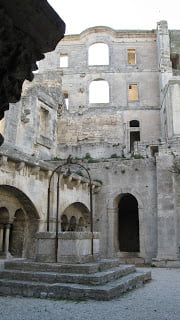 For dinner we went back to St. Remy to a Fodor’s recommended restaurant.  Everyone was French, unusual actually.  SS and I had a rich mushroom soup served with smoked bacon, he had grilled sea bass and I had duck confit, then he had a chocolate fondant and I an apple tart with vanilla ice cream.  Both very good if not exceptional.  The drive home, through tree lined highways and fluorescent markers was like racing cars in a video game.  Do they still say video game?  More tomorrow… 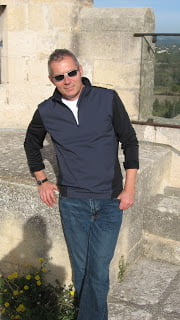