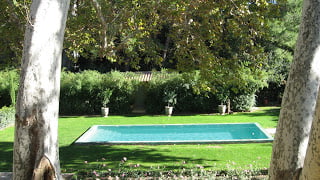 It rained hard all night but we woke up to a beautiful day, occasional clouds, lots of sun, around 8C, but no wind.  Our tourist world looked wonderful.  Of course still lots of protests, some gas stations out of gas (although we keep being told that diesel will run out before petrol, gas stations seem to run out/close entirely, not by fuel type).  Trains are, apparently still being disrupted and according to the newspaper it’s chaos; we’ve only witnessed occasional disruptions.  But SS mentioned that there was something festive about the work stoppages and wouldn’t you know it, in the IHT today, was the phrase: “a festive atmosphere reigned along the main cortege in Paris, which police said numbered 67,000, down from 89,000 at similar protests last week.”  So what, is it a protest or mardi gras?

Checked-out after breakfast and drove a side road towards Chalon sur Saone; the driving was spectacular, all the fields and trees dripping in rain, sun glistening off leaves and fields and vineyards, it was just amazing.  Joined the A6 toll road at Chalon and that was dull; the crappy Citroen hits 40,000 RPMs at 125 which, with the 140-150 km/h Audis and BMWs speeding by and the semi-trailers at 110 on the other lane, kept me on my toes.  Also, you are sort of trapped on the toll roads, very few exits and services, it’s weird and isolating despite the other cars.  We drove steady to Lyon which, driving without a stop, was a bit like the I5 through Seattle in rush hour.  After Lyon we joined the A7 south to Marseille; the views got decidedly better as we more or less followed the Rhone south.  Weather continued to improve, wind farms, corn fields, vineyards, old forts and chateaux, hardly any traffic (the secret in France is to drive between noon and two while everyone is having lunch).  We took a wrong exit at Orange where it was 19C and we discovered the Nemo didn’t have AC.  About the only thing that could redeem the lawnmower is a biodegradable doggy bag to wrap it up and toss it in with the compost.  But the pep-free tin toy didn’t keep us from relishing the sites and we moved onto side roads south and west, skirting Avignon, and ending up at our Provence digs, the Bastide de Boulbon in good spirit.

Boulbon is a tiny village pretty much in the middle of nowhere, south of Avignon, east of St Remy de Provence and north of Tarascon (all the villages “people know about”).  The hotel, built in 1850, has been nicely renovated and has elaborate gardens with mature trees surrounding it (they call them, in French, plantain trees, but they are a tall hardwood, and we haven’t been able to translate).  We checked-in then took a walk about town.  We climbed into the hills where there was wild rosemary and lavender and a thorny bush SS thought was wild holly but had acorns, and, at one point, we heard quail in the bush (Thursday and Sunday are hunting days in Provence, something we diarized for later…).  Afterwards we skirted the town which, although small in population covers a big area, many people having acre yards of olive trees, fruit orchards or vineyards.  It was absolutely over the top glorious.  The only thing missing was a rainbow with a pot of gold and a dancing leprechaun.  When we got back to the hotel we took two recliners into the sun and spent an hour just soaking it up.

For dinner we did the hotel restaurant for ease.  It was surprisingly busy.  We both decided on the same menu: A salad starter with roasted tomatoes that had been marinated in a herb blend, a light dressing and a warm chevre in a phyllo packet; then a beef filet with wild mushrooms, green beans and roast potatoes; and a warm chocolate fondant with nougat ice cream.  We took coffee and a muscat de beaumes de venise in their french country lounge, overstuffed furniture and walls full of butterflies and leaves and other pressed nature pics. 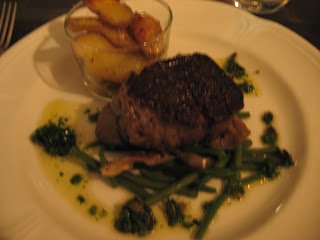