Yet another wonderful day.  Country still on strike, running out of petrol (may be stuck here?), dollar in a tailspin, but sunny and lovely and crisply autumn in Burgundy.

We had the most mediocre in-room continental then an early start to Rocheport.  The road west rolled through vineyards, farms with pastured Charolais cattle, quaint villages, narrow roads with brick fences, tree borders, and a light morning mist rising against the limestone bluffs.

Rocheport is a medieval castle which, after the revolution, went into disrepair.  Around 1890 there began a two and a half decade restoration.  It’s cool and authentic and off the path.  It sits on a hilltop with three drawbridges to the entrance.  The door is locked.  You must, in a Frau Blucher style, knock three times on large knockers for entry—at which point the staff, using an enormous skeleton key, let you in.

The tour takes you through four rooms.  The first is the guards’ room, replete with two handed seven foot swords, crossbows with enough power to pierce knight’s armour or a foot of oak, French horns, “megaphones”, and enormous lances.  It was the Round Table for real.  Then to the Captain of the Guard’s room, virtually impenetrable with two doors, pinhole windows and three feet thick stone walls.  After that the kitchen, substantially modernized to be utilitarian in 1900 (it included, e.g., a coffee maker from the 1700s).  Finally the dining room, replete with many embroideries and oils.  A curiosity on display was a bracelet found by a farmer on the estate in 1970: A 1.3 kg solid gold bracelet from 1100 BC!  Clearly, the site has been prominent for a while…

The castle was built on stone by Alexander of Burgundy in the 12th century and became the seat of both Reginald and Philippe Pot, (both members of the Golden Fleece if that means anything to anyone), thus becoming Rochepot.  Snaps inside the room were not permitted, so the pics below are the courtyard, spires and view only.

After our tour we took a short walk through the estate, part of an 18km loop above the village and vineyards. 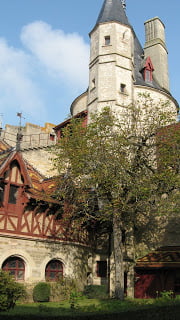 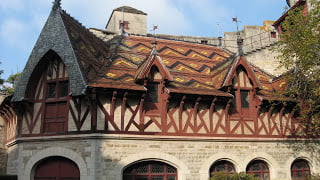 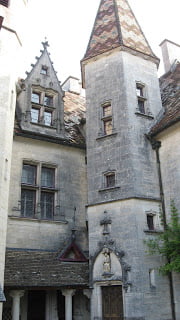 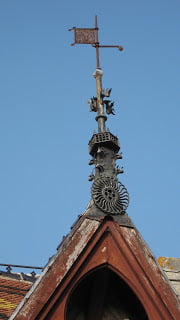 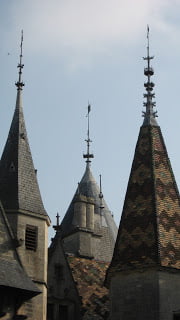 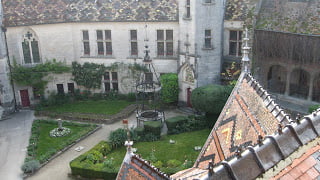 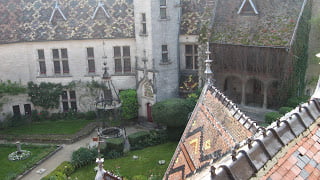 For lunch we drove west then south to Puligny Montrachet.  Part of coming to Burgundy is to taste the best white wine in the world which is the home of the chardonnay grape.  Since our interest isn’t to drop by each and every “cave” for tasting we decided to take a “degustation” menu at one of the premier producers, Olivier Leflaive.  Puligny Montrachet is just off the beaten track, a charming little village with a couple of central squares and hugely appealing homes and “chateaux”.  It was our second and third choice for accommodation, but a little pricier than where we ended up; I think we should have coughed up the dough.

Our lunch began with instructions: We were going to have four courses and samples of 14 wines, 11 white, three red, always lined up left to right, and were to sample each wine with each dish and report back.  But before I go on let me say that there was a spittoon on the table!  Our first three were an Aligote (a white grape which gives a basic dry wine of not too much interest), a Chablis and a special Bourgogne also from chardonnay grapes.  While the Chablis was the most expensive, the Bourgogne was tastier.  We enjoyed gurgling these with some cheese gougeres (puffs).  Next a Rully and a Saint Romain.  Rully is considered a “lesser” Burgundy but in fact sells in YVR at a reasonable price point and is nothing to be sneered at.  We were served a terrine of tuna and parsley alongside smoked salmon with a herbed mayonnaise.  Both of us agreed that the St Romaine was perfect with the tuna but, when our waiter was speaking French to some Germans nearby, and they agreed with us, he mockingly said “oh so you agree with the Canadians?” as if to imply we were daft.  But it was in fun.  We moved on to the heavy hitters: Chassagne-Montrachet, Merusault and Puligny-Montrachet.  These are whites for the well-to-do, who think of nothing about dropping big bucks on vino.

It was about this time that Olivier’s brother Patrick Leflaive stopped by.  He made an appearance at all the tables, speaking French with the Germans, Italian with the Italians, and English with the Kiwis and us.  When he found out we were Canadian he rolled his eyes and moaned about the government bureaucracy that controls wine distribution in the provinces.  In Ontario, for instance, they demand abundant free samples and a multitude of paperwork before even considering distribution.  He told us they asked some very important questions relevant to the consumer such as, most recently, “What is the weight of your cork?”  When we asked him what indeed was the weight of the Leflaive cork, and he couldn’t remember, it reminded me of the Orwellian system that for some reason sucks freely on the taxpayers’ teat back home.  I told him it was virtually impossible to find Leflaive in BC, although I did once spot a St. Romain at Liberty in Point Grey (retail $65, needless to say I didn’t buy it; which, btw, sells for 16 euros at the vineyard and I might add, our whole lunch, all in, was less than the single bottle would have been in YVR!  Pave my roads on Saturna Mr Taxman!). 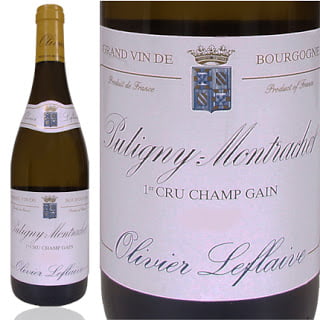 We enjoyed our pricey, elegant wines with a chicken breast baked in puff pastry and a potato puree (aka soft and milky mashed potatoes).  That would have been enough, that would have been more than enough, but out came the really big guns: First growth (or “premier cru”) Chassagne-Montrachet, Meursault and Puligny-Montrachet.  With these we had three soft cheeses.  Now to be fair, even at the vineyard prices (47-49 euros a bottle) I wouldn’t buy any.  But that said, the PM was about as perfect as anything you can imagine; buttery and with a hint of oak, some nuttiness like hazelnuts, a touch of peach, essentially magic.  Each wine was grown from vineyards within a five km stretch and yet each was unique.  But although different each was very close to perfection.  I guess this is how the top 400 Americans paying 16.6 per cent income tax live…  After these came three reds, a table red, a Pommard and a Volnay, along with two strong semi-soft cheeses and one hard cheese.  The reds are very respectable, Pommard and Volnay hold a lot of esteem in the wine world (the Italians skipped some of the whites demanding reds), but the reality is that the previous three whites are as if parents were presented with three of their children and asked to choose their favourite.  The three reds were like asking those same parents which of their three children is tallest.  The latter would be much easier to do.  And, fortunately (or not) those reds went down the spittoon.

We moved on to a small but very dense valrhona chocolate mousse, followed by coffee, then a very long walk!

It was an extravagant and exciting day so we rounded it off with two loads of laundry and some take-away from a grocer’s and an evening reading.

Aside from our fabulous day, it reminded me of the Calvin Trillin essay from the New Yorker twenty years ago about wine snobs who couldn’t tell the difference between red and white in a dark glass.  “I have spent a certain amount of time in the company of wine cognoscenti, but I wouldn’t claim that I have distinguished myself on those occasions. Many years ago, for instance, a winemaker I know was kind enough to invite me to the “barrel tasting” of California wines which used to be held annually at the Four Seasons restaurant, in New York—an event that was considered a very hot ticket in the wine game. At the table, many glasses of wine were put in front of us. Then someone who had his mouth very close to the microphone talked about each wine in what I believe scholars would call excruciating detail—the type of vines that had been grafted together to produce it, for instance, and how long it had been in stainless-steel vats or oak barrels. Displaying manners that I thought would have made my mother proud, I drank what was placed before me—not noticing, as I glanced around to see whether more food was ever going to appear, that everyone else was just sipping. I have since heard two or three versions of what transpired that evening, but they do not differ in whether or not I fell asleep at the table. Particularly considering my performance at the Four Seasons that evening, it’s perfectly possible that some people asked to sum up my knowledge of and attitude toward wine might respond ‘ignorance, tempered slightly by philistinism’.”