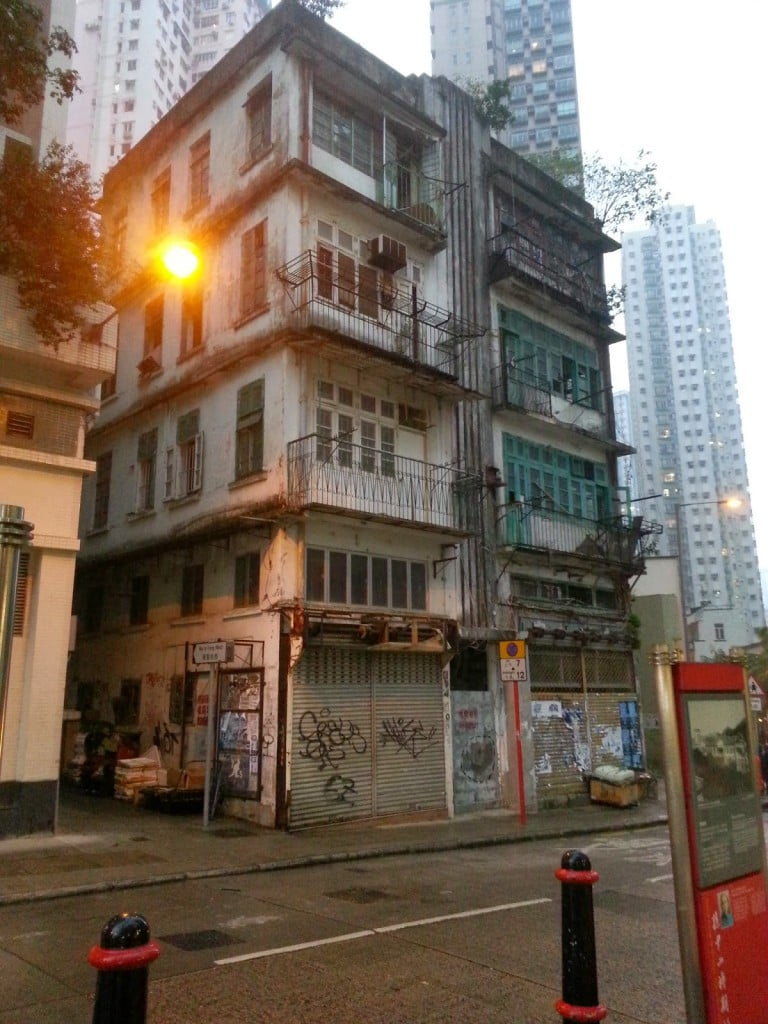 Our hotel is in Sheung Wan, the end of a subway line, a transitional mix of massage parlors with cutting edge galleries, cool shops and cafes and old school market stalls with remnants of a colonial past.  It’s a wild confluence of the decrepit and revitalized, old and new, happening and over. It’s incredible.On Friday night we had a booking at 121 BC.  I’d read about it online a few weeks back and it seemed like a
good idea: Daily chalk board tapas menu, one communal table, five minutes from
our hotel.  So I booked it and we went: It was superb.  We shared a number of brilliant dishes including: A broccoli sautéed with almonds in
chili oil, cabbage salad with pecorino, Jerusalem artichoke fritti, bruschetta
with mortadella and olive tapenade (to die for), a roast pork with crackling,
and SS topped it off with a cheese plate.
SCORE!
Saturday morning we had a coffee at the Agnes B a block away;
although a French fashion icon she has a patisserie style of local cafes
throughout Hong Kong.  Then we walked
through much of the shopping district of Hong Kong Island west.  It was cooler today, around 22, and less
sticky, but with actual drizzle, on and off.
SS bought an umbrella for $5, then spotted the same item around the
corner for $3.50.  Hooped! 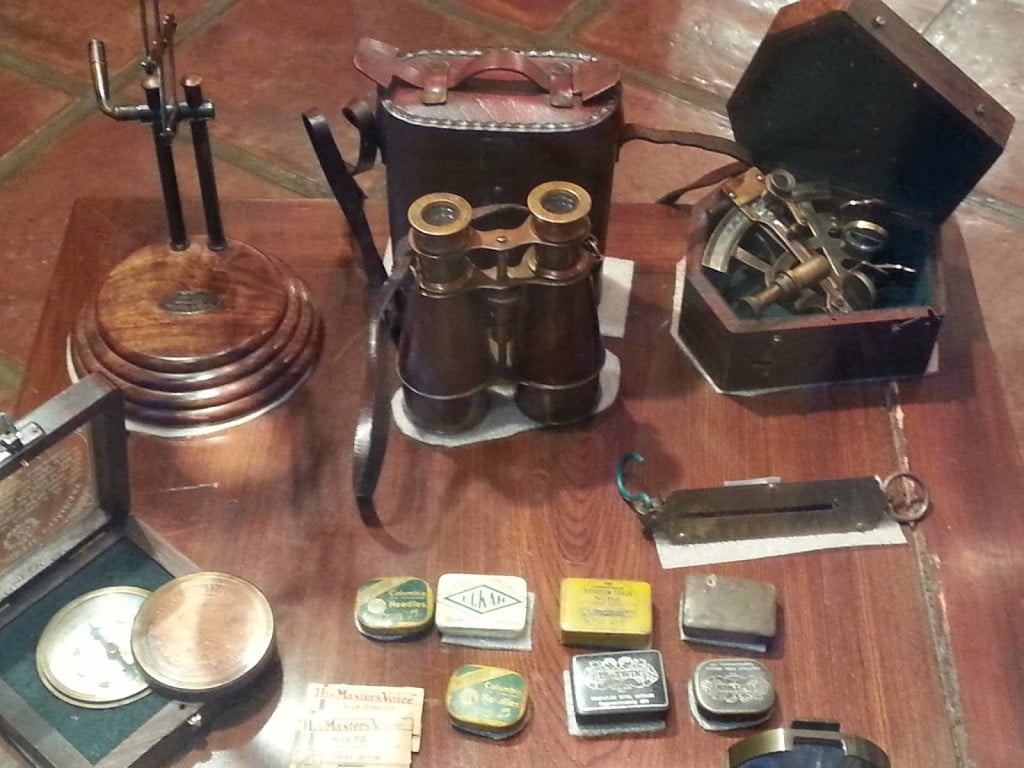 We took a ferry across the harbour to Kowloon, then walked
the seawall which provides spectacular city views of Hong Kong Island to the
west.  We made our way to the historical
museum, dedicated to the natural and geological history of HK as well as the
cultural history. 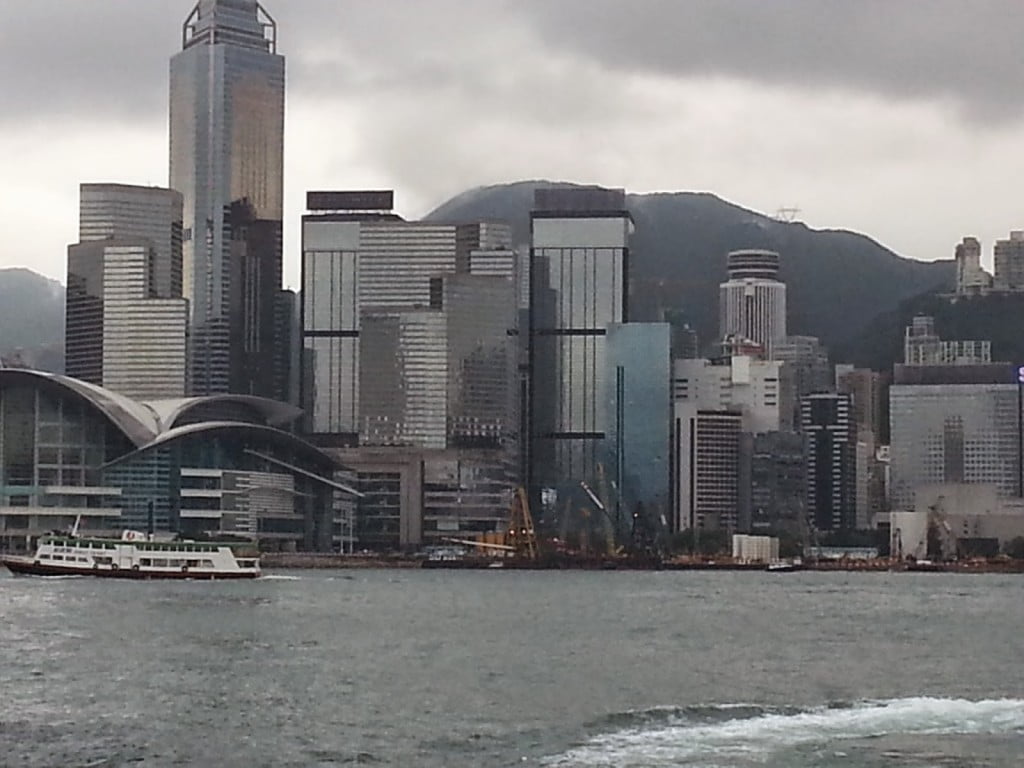 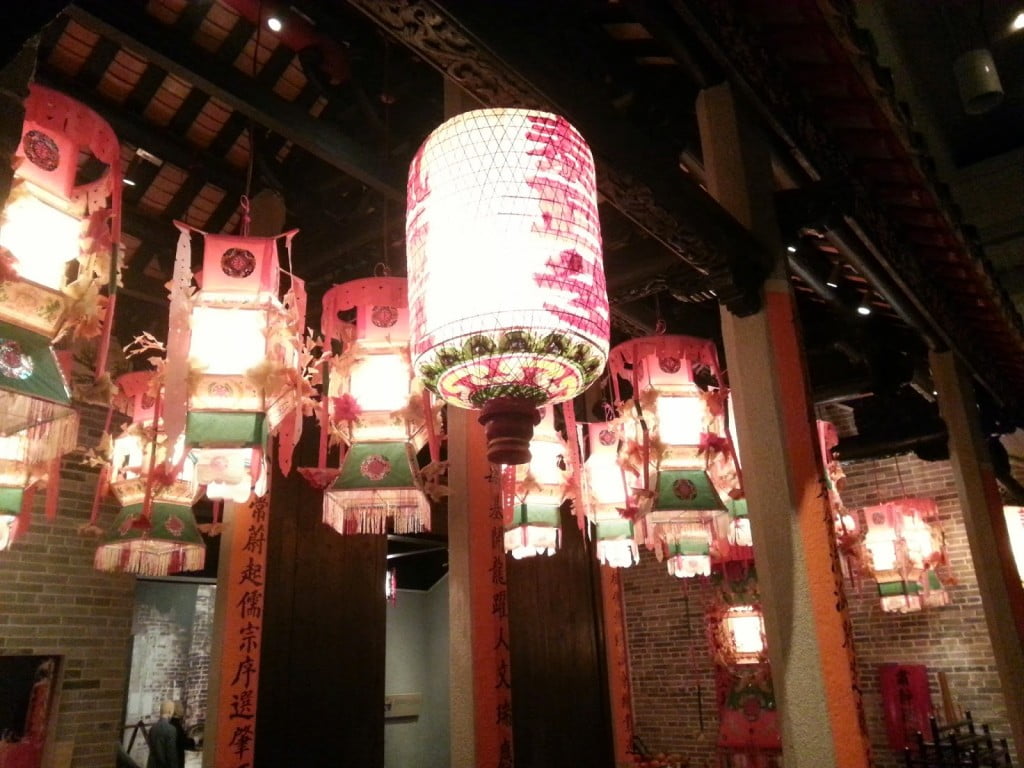 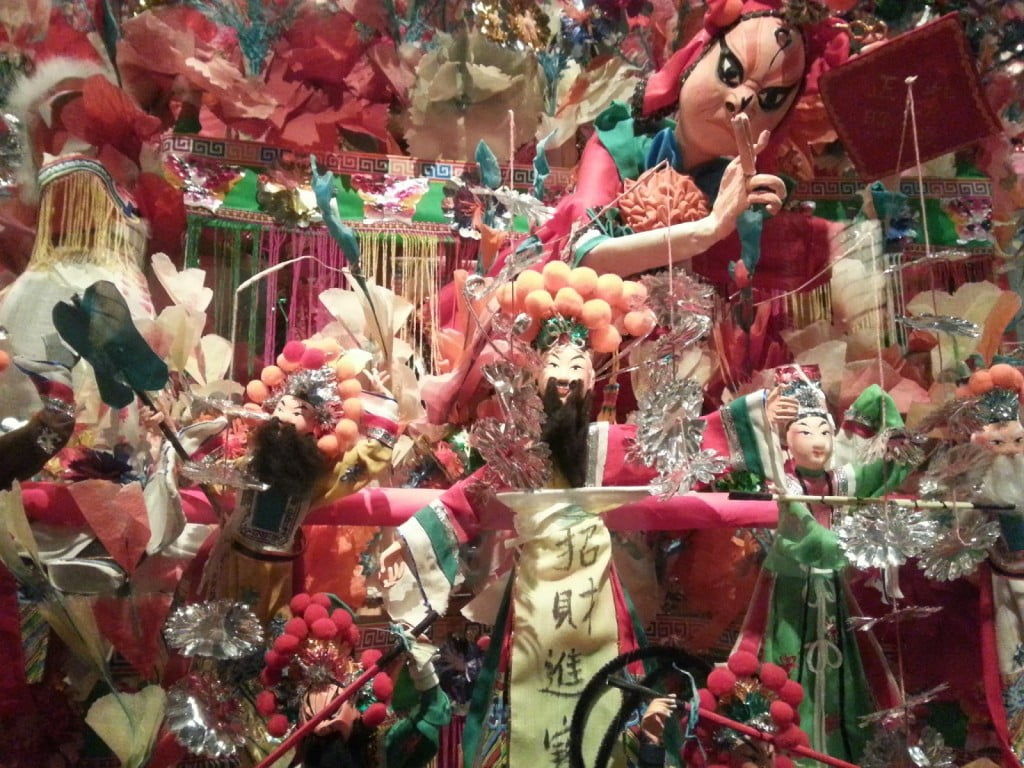 After our museum trip we took the subway back to our ‘hood
for lunch.  We don’t have a SIM and
without connectivity can’t access Google maps to figure out where we are, but I
had read about a new noodle place called Foxtail and Broomcorn which does
non-MSG noodle dishes in a 28 seat no-reservation cafe.  (The inane name comes, supposedly, from two
of the first ingredients used to make pasta.)
By accident or fate we literally stumbled across it and lucked out with
a seat at the bar.  SS had a prawn broth
fish, tofu, pulled pork noodle soup.  I
had a cold soba noodle bowl with crispy chicken and vegetables.  SCORE!
Following lunch we went through the area our hotel is in
with more deliberation.  Hollywood Road
hosts dozens of antique dealers.  The
artifacts here range from the phony and dubious in hawker’s stalls to those of
extreme antiquity.  Unfortunately, you
also see ivory shops, whole tusks with exquisite carvings, and many other
artifacts which reek of tomb raiding or deceptive trading.
We went back towards the harbour through markets, high end
shops and malls, and throngs making the most of their Saturday off. 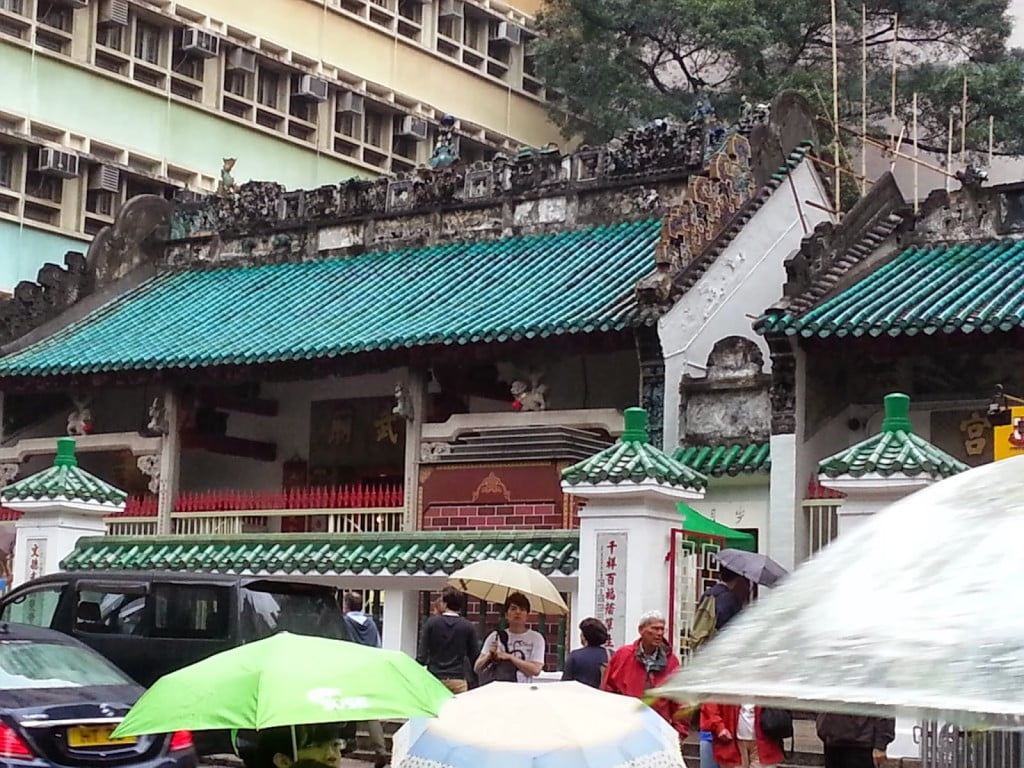 For dinner we had no reservation. Every shop we dropped by I had been asking people where they liked to
eat in the area and the answers were never too interesting.  Then one woman in a boutique told us “her friend”
the chef David Lai had opened a little place called Neighborhood just two weeks ago and why didn’t
we go there?  That sounded so quaint and simple and homely, so we dropped by mid-afternoon
but were unfortunately told they were fully booked. Still, I left my email just in case.  About an hour later they told us they had a
cancellation.
Well, first of all, David Lai is a big deal in HK, having
studied under Alain Ducasse; he was named chef of the year by Time Out and was
recently listed by The Guardian as a chef of one of the best restaurants in
HK.  Of course we knew none of that going to dinner.  We just went on someone’s recommendation from a shop in the market.  At any rate, it wasn’t over the top fancy or
pseudo; smallish, seats about two dozen, unimposing, not very expensive, simple menu (to
be shared) and a lovely, warm candlelit room off a laneway terrace near the
hotel.
We shared a few sensational dishes including: Artichokes wrapped
in bacon and braised with pearl onions; arugula salad with goat’s cheese and
nicoise olives; risotto with beef marrow; lamb on mashed potatoes; egg noodles
in pulled pork ragu; fresh porcini mushrooms in a crock pot with vegetables and
garlic.  Yes, I had dessert: A 70% cocoa
chocolate ganache, warm, on a crisp chocolate wafer.  Sort of like a super high end chocolate
pudding.  And while SS had an espresso I
took a chrysanthemum tea which was velvety and soothing like white linen but, as
he put it, revolting.  Not a big fan of
the herbal tea thing.  SCORE! We’re batting better than Roger Maris! 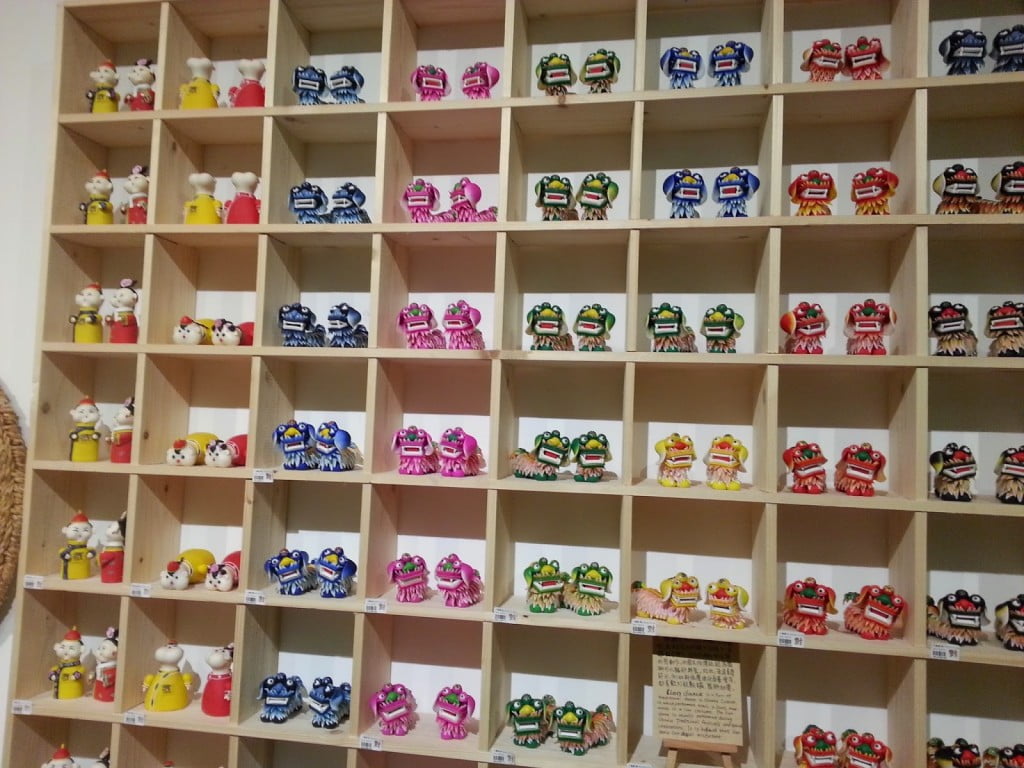 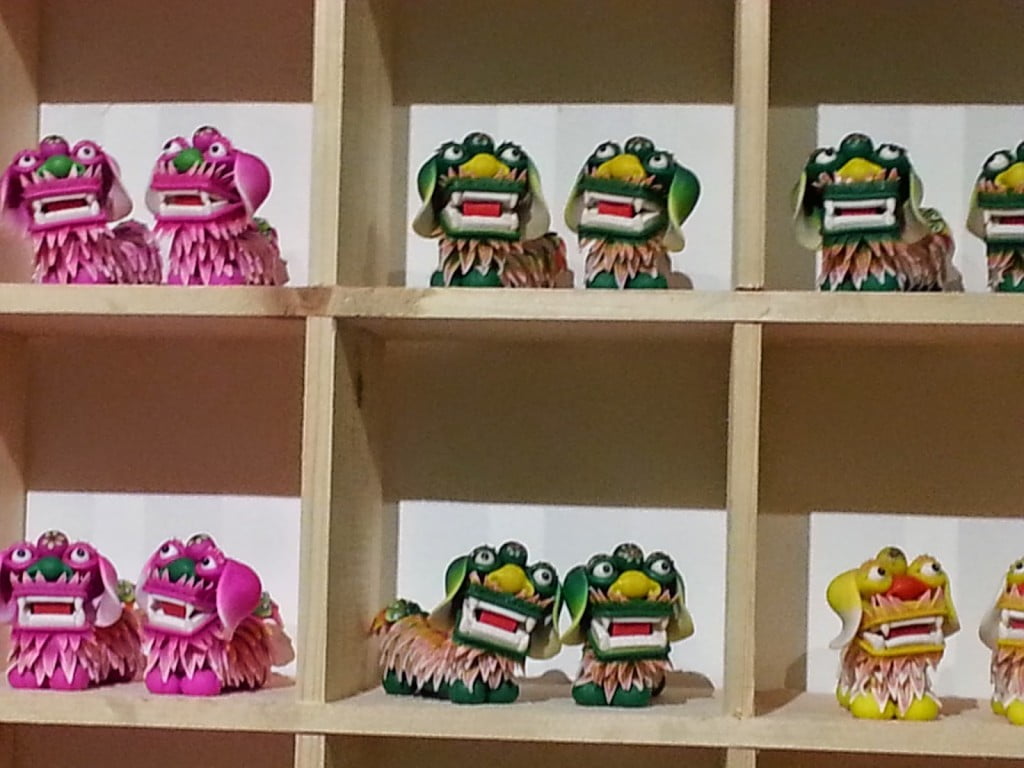 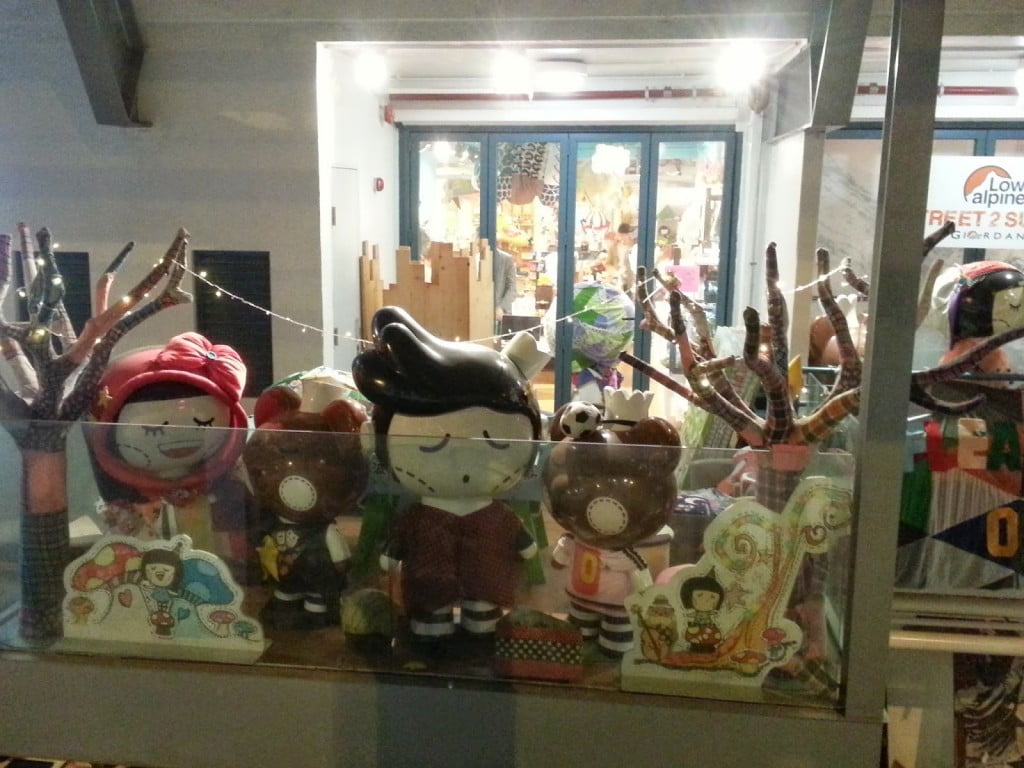 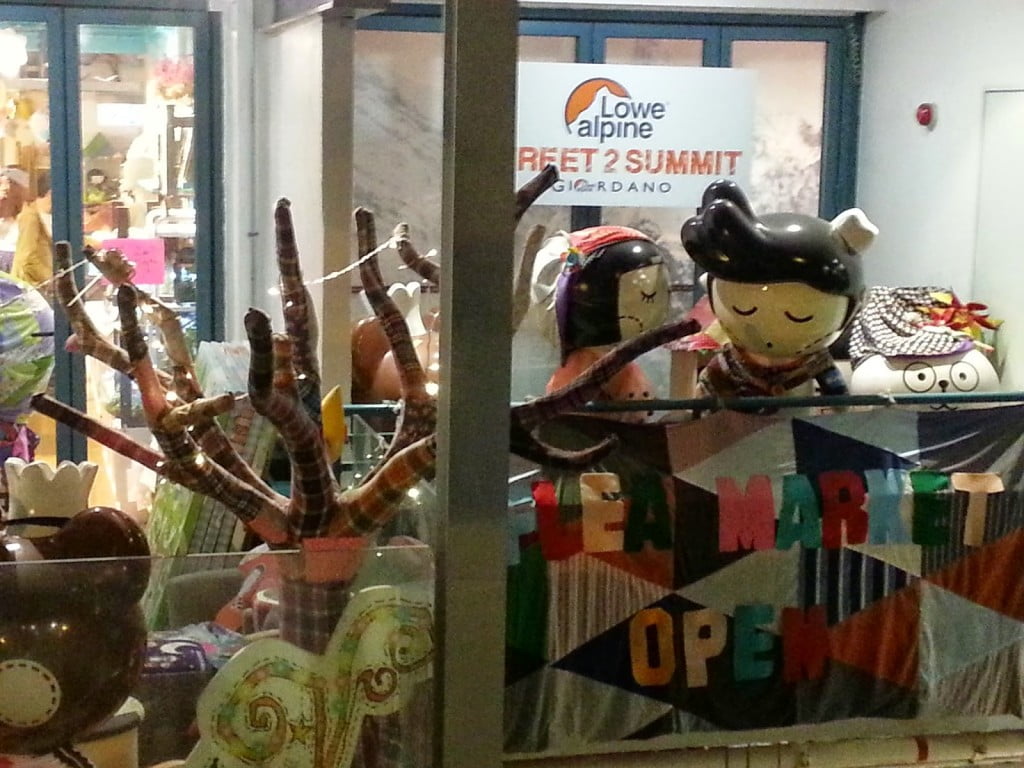