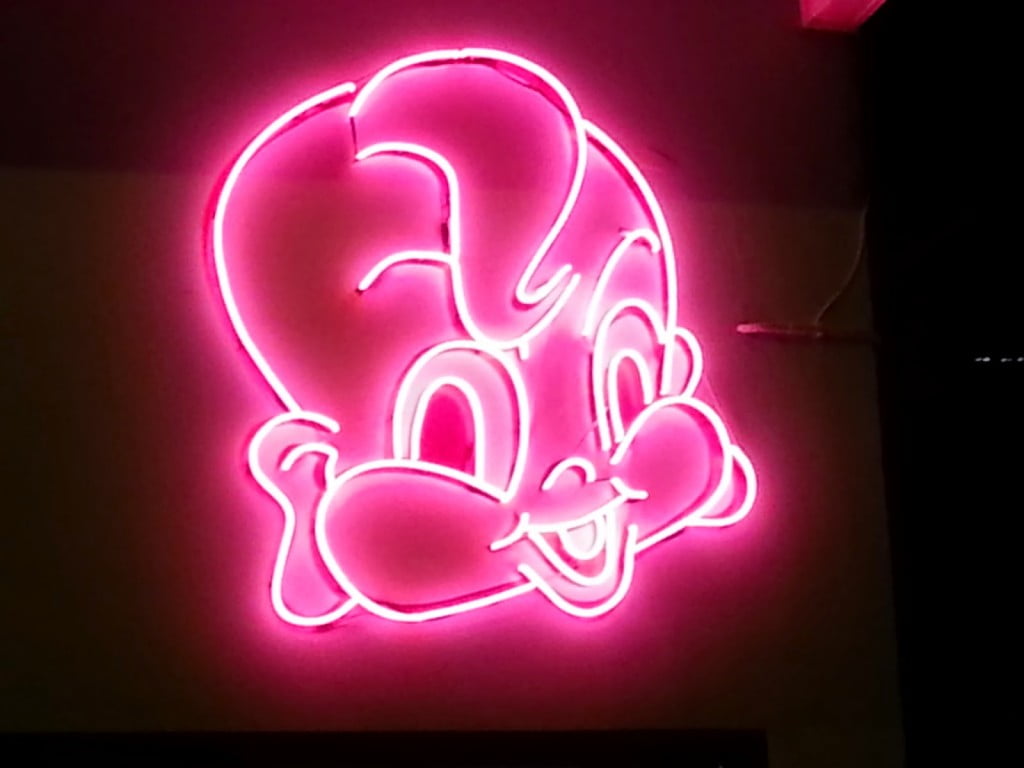 Don’t let the pictures below fool you: It was gorgeous today.  A fair bit of cloud, and only intermittent blue sky,
but 24 degrees, a light breeze, zero humidity.
It always gives me a thrill to be somewhere outside in a t-shirt in
November and find it hot.
We set out for The Peak Tram.  It’s pretty much obligatory; they ask you at
Immigration upon arrival in HK which day you’ll do The Peak.  You are committed.  Although there are two, and they go up the
mountain every eight minutes, the hordes descend en masse, especially on a Sunday,
especially in good weather.  It’s antique
and on the rickety side, takes 95 seated and another 25 standing, at times hitting a staggering 27 degree incline. But
as funiculars go I felt much safer than the public transport versions we took
in Valparaiso, Chile, a few years back.
At the top of the tram they suggest you a) do some shopping because nothing would be worthwhile in HK without a mall, b) visit
the Madame Tussaud’s Wax Museum, because there is always a wax Marilyn with her dress up that tourists like to get shot with then c) sit down for a meal.  They also recommend you pay double your fare
to enter an observation deck called the Sky Terrace.  Another alternative is free: Take a hike to the top of
the mountain, another 30 minutes (from 1300 feet at the tram to 1800 at the
lookout) which we did.  This was a lovely
windy road uphill trek, sometimes a slog, but mitigated by the breeze.  The pics were compromised by the cloud cover
but to the naked eye it was still spectacular, seeing HK Island, Kowloon to the
west, and east to Mainland China.
The peak was not initially developed, too steep and seemingly remote, but eventually with
the outbreak of disease it was decided to create a hospice for ill
soldiers in a removed environment with the attendant healthfulness of nature.  Unfortunately, the reputed health giving
properties of the altitude did not provide any positive outcomes.  After some time it became the governor’s
summer home, the Mountain Lodge.  In the Scottish baronial
tradition.  Of course.  All that is gone today, except the gate
house.  There is a Hong Kong version of
an English garden which is, of all things, a dog park, and excellent
viewpoints.  There were hibiscus in bloom, a bit beaten from the recent wind, but a nice tropical touch to the route.
Upon our return down the tram we took the subway to the
Causeway Bay area.  This is a mecca for
two things: First, mainly, shopping.  Super uber high
end shopping as well as street vendors and hawkers.  You can’t go two feet without stumbling
across a jeweller’s. But second it’s also the
current site of the protesters that are all over the news.  Who, in
my uneducated view, have a very similar position this many weeks in as did those at the tent city which sprung up at the Vancouver Art Gallery a few years back: They are attracting
attention, and disrupting traffic, but it looked like Van Cleef and Arpels,
Chanel, Valentino and all the rest were doing quite OK.
We had lunch at Paradise Dynasty—you gotta love that name.  SS is extremely fond of dim sum so we made an
effort and wound up in a luxe mall where there was a line up of Asian families
to take Sunday lunch. We were probably only one of three deuces.  The meal was excellent, steamed and fried
dumplings, crispy fish, pork with green beans, cucumber with garlic salad,
really good.
An explanation on how to eat Xiao Long Bao: Start with the white, original flavour. Then the green, ginseng.  Then the pink, foie gras. Then the black, black truffle.  Then the yellow, cheesy.  Then the redder one, crab roe.  Then the purplish dumpling, garlic.  And finally the red one, Szechuan.
After lunch we attempted to walk all the way back to the
hotel.  The only problem is that
geography (the sea, the steep hills) prevent any roads except the major
arteries from running any distance.
After a couple of clicks the noise gets unbearable.  At one point I hopped on a commuter tram, or “ding
ding” as they are called.  Cramped, old,
double decker trams reminiscent of the colonial period, they are a total trip. 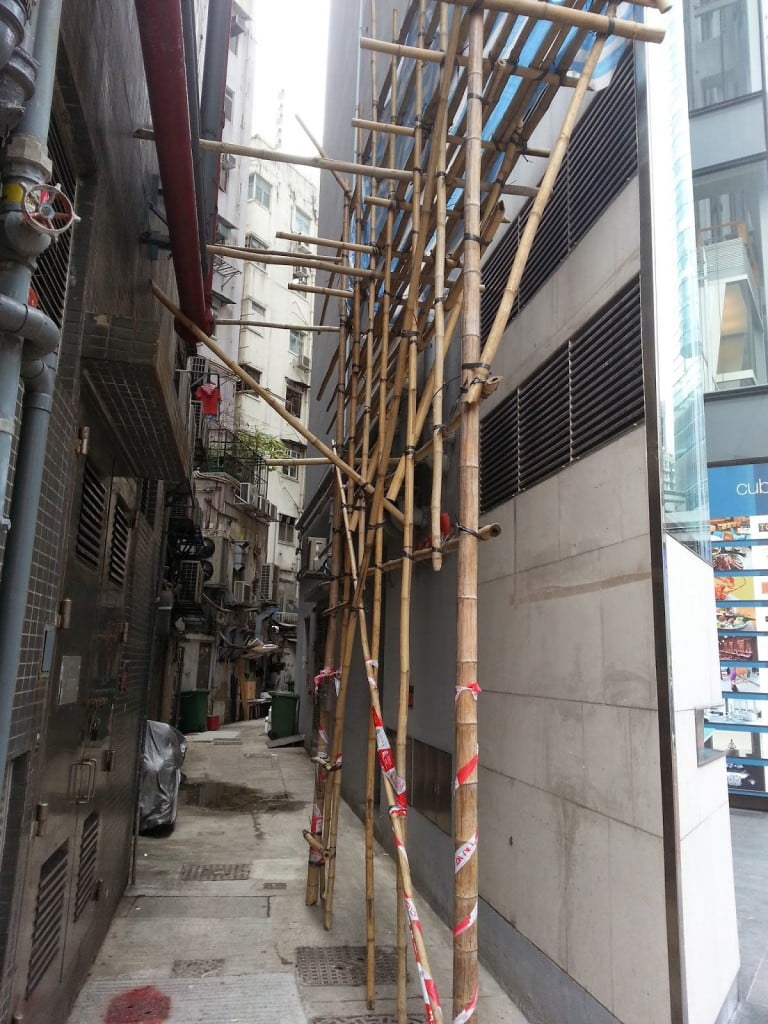 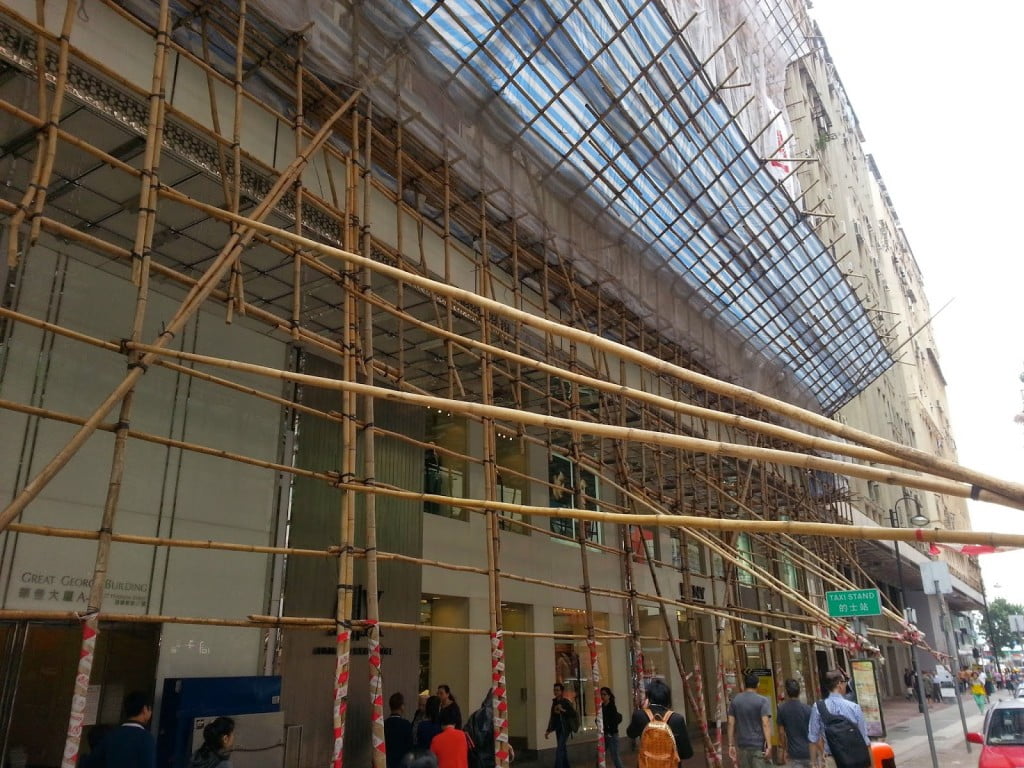 A sidebar on construction: They build with bamboo scaffolding.  When you think of the height of what’s built, and then combine that with the hilly terrain, it’s truly terrifying. 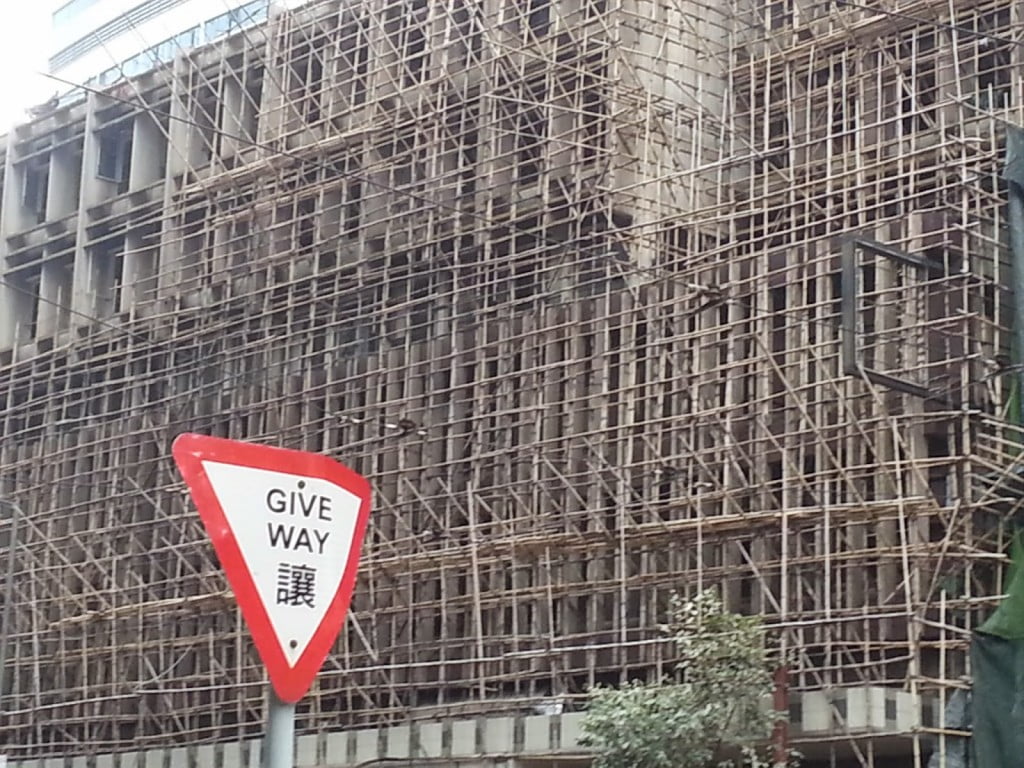 For dinner we went to Sohofama, a local place that specializes in regional ingredients, farm to table, no-MSG, all that stuff the “young people” are into.  It’s located in a reconfigured building that began life as Queen’s College then, after WWII, became a barracks for married “Chinese” police.  From college to barracks to galleries, it’s now host to workshops, studios, HK hipsters, etc. It was too dark to shoot the food, which was all lovely, and read like standard Chinese (pork dumplings, Kung Pao chicken, Tam Tam noodles) but was in fact much more like Bao Bei in Vancouver, unique and savory twists on old favorites.