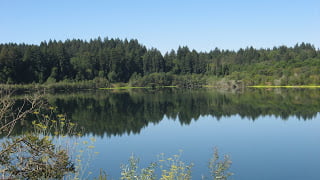 Tuesday, August 23, 2011: A mild 70 or so on rising, crystal clear sky, quiet.  Checked in on the world (Libya, dollar OK, earthquake, the usual) then drove down to a Riverfront Park, a 300 acre regional park on two lakes near a town called Windsor, SW of Healdsburg.  The lakes were created from gravel mines; one, Lake Wilson, is a bird sanctuary, the other, Lake Benoist allows canoes/rowboaters and fishing.  A popular horse park.  Water was still and glasslike.  We had a wonderful walk around the perimeter, and Tonino had a dip and a bath of burrs (too bad we didn’t call him Raymond).  We took a woodsy trail over a bluff and were going to take a second spin around Benoist but it had turned ever hotter.  Back at the car the thermometer registered 85.
We took the wine  backroads through the various valleys which dot the Russian River.  We stopped at Rochioli, where the tasting was free, including their sensational $52 a bottle Pinot, and then ended up in a sort of one horse town called Geyserville.  There was an  upmarket pizza place on the shady side of the street so we tied up the dog and took lunch in the window (shared a salad and a house pizza with meatballs and romano and, hot, topped with arugula).
After lunch we took the scenic route to Ridge; temperature had gone over 90.  It seemed imperative to make the trek to what has been probably the most consistent and brilliant of California vineyards.  Their huge chateaux was wonderfully chill, we brought the dog in who got a little pep back, but it wasn’t AC; it was bale construction with overhangs and excellent insulation.  Just goes to show. 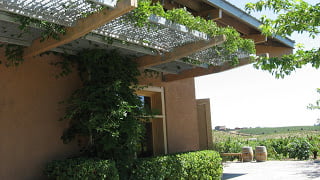 Not much more to report in this heat (settling in around 94 late aft).  Made it back to the poolside, and the deck, and our books and magazines and a few neighbourhood walks, but this is definitely what I would call summer—too bad we had to wait until August 23 to get it!
On Tuesdays Healdsburg has a sure cure for the early week blues most tourist towns experience: A farmer’s market at 4 p.m. followed by free concerts in their centre square at six.  There were a lot of locals and out-of-towners who converged and left us a little bit pressed to find a restaurant, but we did, not our first choice, but what the heck.  At Spoon Bar, in the lobby of a hotel, the walls opened up completely, so we ate al fresco, with views to the back of BarnDiva across the way.  SS had a series of Moroccan salads to start, I had a Greek salad, then we both had hand-made pasta with fresh peas, asparagus, enoki mushrooms and fava beans.  For dessert SS had cinnamon chocolate cannoli and I had a delicate olive cake with blackberries and crème fraiche.  A memorable summer evening, perfectly warm but not oppressive, a light breeze came up around eight and the temperature dipped into the mid 70s.  Very nice. 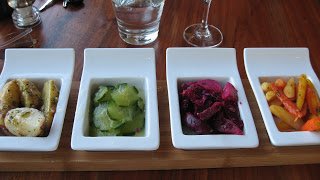 All good things must come to an end.  SS flies back tomorrow AM and I make my way, on the Interstate with the dog, the 950 or so miles return.

Some like it hot, some like it medium cool, some like it the big chill.  For those in the former: Why does Geraldine change her name to Daphne?  There is probably a film school answer to that but I am disinclined to Google it.