Monday, August 22, 2011: Woke up to 59 degrees, cloudy, mist like rain in the air; Mendocino had followed us east!  SS went across the street for coffee to a bakery connected with the DuChamp, the hotel for swells also with Cyrus, the Michelin starred spot; coffee and baked goods are included in the room rate.  We got our act together, packed up the station wagon with all sorts of gloomy weather gear, and set out for Napa. 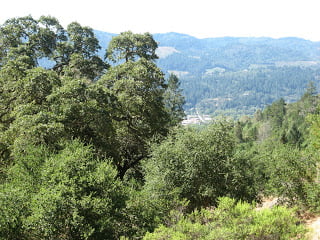 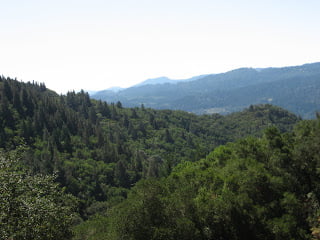 One thing I forgot about California is that it is a tad strict on the dogs.  The really interesting State Parks near here, Robert Louis Stevenson (he honeymooned there) and Bothe-Napa, both with great trails and swimming, are dog prohibited—even on lead!  So we had to be creative and instead went to a county park in Calistoga.  There is a very long trail called the Oat Mine Trail, 2400 feet or so up the Palisades, but we only hiked about 1300 feet up and back, just over two hours hiking.  No sooner had we started, in our mist-weather gear, then the clouds parted, the sun came out, and it was spectacularly hot, about 85 degrees. 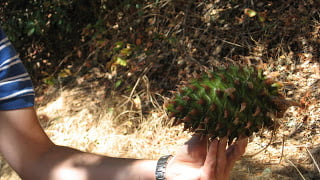 The hike took us through pine, oak, arbutus (which they call Pacific Madrone), laurel and eucalyptus trees with exceptional views south and west through the northern end of Napa valley, the town of Calistoga, and glimpses of the Napa River (if you can call the near still stream that runs down the valley a river…).  The warning at the trail head was to watch for mountain lions, rattle snakes and poison oak.  A little different than the bear warnings up Whistler way.
This trip isn’t focussed on the wine mecca we’ve ended up situated in, but it’s so in your face that sooner or later we had to bite.  When we drove by Chateau Montelena, there was no question but to go Sideways.  The grounds are well-manicured and the “chateau” quite regal,  but there are no organized tours.  Bearing witness was sufficient for me, the $20 tasting fee seemed a little steep and I’m not about to buy anything to drive back home with, but it turned out that on Mondays in August they are offering tastings of their 1990 chardonnay.  For those who have never seen Bottle Shock (spoiler alert), it’s the hugely amusing Alan Rickman film, based on a true story, about an over-mortgaged winery in Napa, a perfect chardonnay, a blind taste test in Paris, and Napa coming of age in the wine world. Needless to say it put Montelena on the map. They also let us “share” one tasting, so we enjoyed their current chardonnay, the 1990 (from a magnum), two cab sauvs, a sauv bl, a Riesling and a zin, from the same glass. 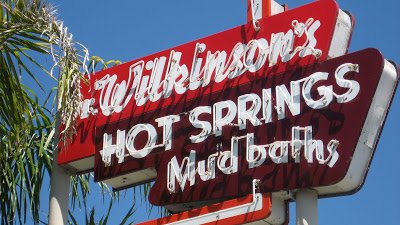 It was early afternoon, so we headed into the nearest town, Calistoga.  This seemed to me the perfect mix of town and tourist, with both quaint and appealing streets and bungalows, shops not too “done up” and even a dog friendly patio where we took lunch under an arbour.
On the way back we detoured to The Petrified Forest, a gimmicky place I guess but it was fun and they let us in with Mr T.  In short, it’s a portion of forest that, 3.4 million years ago, took a huge volcanic blast which felled old growth redwoods, pines and oak.  Many have been “resurrected” by geologists.  The highlight for me though was their cafe.  It is not on the path but I wandered off to check it out: Pristine oak booths, vintage lino floors, the open kitchen with diamond stainless steel, antiquated cash registers, a line of five and ten type barstools.  It was just magnificent, as if someone had closed the door in 1960 and not come back.  The proprietor told me her mother had opened it in 1952.  There is a small cabin attached off the kitchen and she ran it until 1968 when, due to Parkinsons, she had to be hospitalized.  I can’t believe it’s not in demand by Hollywood as a location shoot.  Anyway, there you have it, Americana writ large, and rotting away in dust.
We drove back on Hwy 128 to Healdsburg, took a walk around town, a swim, then went out to dinner.  Walked into a place called the Charcuterie. They had half orders of everything but I’m telling you, even with half starters and half mains, we could barely waddle out of there. Plus, no corkage on Mon-Thu.  God Bless America!

NB: SS informs me that it’s not Charlie Trotter with a place here but Charlie Palmer.  Whatever. Also, to the e-mail query as to why I’m not in more photos: It’s my hair.  So long.  All I can do is either  slick it up a la Zbigniew Brzezinski or let the long furls fall forward, a la Jack Lord.  Neither complementary options. 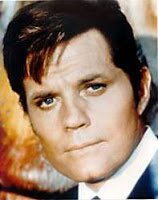 A Place in the Sun: My favourite moment is Elizabeth Taylor coming into the living room on their first scene together and not noticing Montgomery Clift; he stares, she ignores. Can you ever imagine not being able to notice Monty C–even after the accident?   It really had to be ET in 1950, that shockingly beautiful ET of 1950, too beautiful to notice Monty C who was, arguably, the most striking actor of the time. I wonder if in fact it was an in-joke.   And poor Shelly Winters, like a hard done Irish Terrier, forced to wait in the car while his masters take dinner.  Such a life.