We had an early breakfast—as early as you can have it, it starts at nine; the Germans were leaving, four hour drive to Frankfurt, pretty sweet.

Mild but overcast.  Drove south to Cluny, meandering along a two lane highway through farms and forest.  Passed over a mountain on the way, fog and rain, but at Cluny it was bright and 12C.  Cluny, an abbey, was physically established around 908, although many ruins there date to the Merovingians and earlier.  In the context of being an abbey it went through three transitions, becoming the largest and most powerful abbey in Christendom by the 1200s.  After the revolution (during which it was sacked and much of the archives burnt) it was sold as private property, in a  shake-up of traditional authority, and despite its enormous size it was believe it or not detonated for masonry.  Not long thereafter it made a shift back into state property and thus began a long, and ongoing process of restoration.  All that physically remains, in the medieval state, is part of the transept.  That one remains is but ten per cent of the original building: It was huge, huge huge, the biggest church in Europe until St. Peter’s was built, and despite the fact that it is essentially a ruins, the visit is absolutely worthwhile.

Afterwards we drove south towards Macon, stopping at Chateaux Berze.  From Macon we backtracked on a toll-road, then near Beaune west into Burgundy to the B&B.  The hosts did an in house dinner again.  Just us and a newlywed couple from Roanoke, Virginia.  A herb risotto with seared scallops, lamb tenderloin with grilled parsnips, two dollops on the side (one of braised eggplant, the other caramelized onion) and it rested on an onion latke, then for dessert a meringue with chestnut cream.  It was torture! 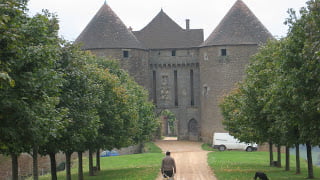