Maddening morning.  The start of two days in the driest region of Chile.  We
checked out of the Sheraton quite early and were on our way when I made an
accidental right turn instead of merging left.
With the rush hour traffic of Vina, the one-way system, and the
inability to turn left or right forever, it meant 20 minutes just to get back
to where we started.
We had two paper maps, with Google maps on the iPad as well
as my phone and still we couldn’t get out of town.  The problem was that unlike the Santiago toll
route, which sort of ends in the city, today we were headed north, and needed
to connect to Route 5 the way you connect from the coast to Interstate 5.  Once you leave the central, tourist and
commercial areas, however, you’re also leaving behind any semblance of
signage.  Plus there’s no grid
system.  We battled the traffic and wound
our way through all sorts of streets, ended up at an open air market, had no
idea where we were, forged on, found ourselves in a roundabout with a choice to
go left or right, randomly chose left, and, yes, it turned out to be the right
choice.  But it was 90 minutes since we
left the hotel and we were only formally on the highway!
Once we were on our way, first 60 then 5, it was smooth
sailing.  Light traffic, good signage,
excellent roads.  The 5 winds along the coast
past cacti forests and desert landscapes, rugged coastal rocky outcrops and
long gorgeous sandy beaches with huge surf.
The terrain reminded me a lot of South Africa’s garden route, albeit
without the gardens.  It was absolutely
barren, one or two exits, very few services.
One of the road signs listed a city 1147 kms away.  The further north we got the nicer the
weather though.  And hotter.  By the time we entered into Chico Norte, the
state that borders Valparaiso to the north, the AC had to go on and by the time
we got to the city La Serena, it went up a notch.
Route 5 is part of the PanAmerican Highway which, except for
a stretch through the Darien Gap, stretches from Alaska, down through Alberta,
the Midwest, Mexico, Central America and to the tip of South America in
Argentina’s Patagonia.
Winding down into La Serena, one of Chile’s major cities,
was a bit of surprise.  While it’s a
beach town on the shoreline, it’s a college and market town as it sprawls
inland and teeming with cars and people and dogs.  The traffic was horrendous.  Again, no signage.  We drove forever until we hit the Route 5
tollbooth north which we knew was well in the wrong direction.  A quick u-turn and back into the centre.  We spotted, totally inadvertently, a tiny
little sign saying Vicuna, a town en route, made a left, and only with luck and
perseverance did we again find ourselves on our way.
We are far away.  Far,
far away.  We drove across the desert for
four hours then turned east towards Argentina on a route that, although it
crosses the border (eventually) is a dirt track for the last 100kms.  The route reminded us of the Similkameen,
austere and dry on the hillsides, with lush farms and vineyards in the
valley.  Except here cacti litter the
hills and many of the farms are terraced.
After a long drive to the middle of nowhere, we took a turn south, along
a narrow precarious valley road with a warning sign “ruta curvas.”  It was indeed.  Nervosa too.  Up, up, up, up.
Then, after another 40 minutes or so, having passed through a few
one-llama towns, we pulled into Elqui Domos, a little rustic resort on a
hillside about six kms south of the “town” of Pisco Elqi, which lies on the
valley floor 1300 meters above sea level.
There is a large geodesic dome which is the lobby and
restaurant.  An unheated pool.  As the terrain rises steeply there are seven
domes which are rooms, then at the top, a very steep climb (127 steps plus
numerous hilly bits without steps) and exhausting with luggage, are four
three-floor observatory cabins.  We have
the northernmost, arguably with the best light.
The entrance has a huge slider, up a few steps is the bed, with a wall
of glass to watch the stars, and on the roof is a lovely private deck with east
and west views.  It is not fancy; it is
fancy “camping.”  But it is serene, with
a brook running in front of our cabin, only the remotest sounds of cars,
crickets, birds, and the bluest skies I’ve seen in years. 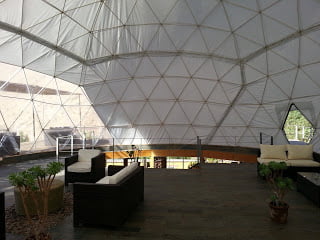 After a modest dinner in their restaurant we did a local
astronomy tour.  The sky was clear, the moon
not in the night sky, it was cool and perfect for stargazing.  We looked up at the arm of the Milky Way, a
waft of white light smeared across the horizon, as well as the Clouds of Magellan
in the constellation Dorado, 160,000 light years away (large cloud only, the
small cloud was behind a mountain).  We
had a bit of a lecture, with the guide using a laser pointer to indicate
different constellations.  Then we
entered the observatory (there were four of us) and he set the telescope to
different computerized settings (the German made device had, he said, over
40,000 preset calculations).  At first we
looked at Sirius, the brightest star in the southern hemisphere, but not Sirius
B even though I asked (!), then various stars in the Southern Cross, not
visible in Canada, then some stars in Orion not visible to the naked eye, an
amazing blotch in the large Magellanic cloud called the Tarantula Nebula, which
was hugely bright and complex and actually had the appearance of a spider.  The last two views were, as the guide put it,
the dessert.  The first was the white
dwarf (dead star) in the Orion Nebulae followed by Saturn.  There it was, just like the science
textbooks, except pretty small through a telescope!  All in all pretty cool and something you could
only do in a few parts of the world.
Cold desert night, hotting up fast the next day.  SS did a long morning walk but I lounged by
the unheated pool.  There is one other
cabin and bout four domes occupied but we are the only car (the others took the
16 hour bus from Santiago!) and, at any rate, it feels like we’re alone.  Spent a lovely day with a brief tour of the valley and otherwise lounging on our deck, reading, by the pool.  Early night–and we skipped dinner! 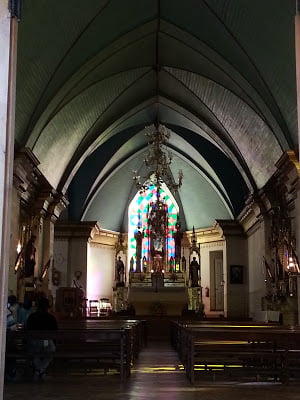 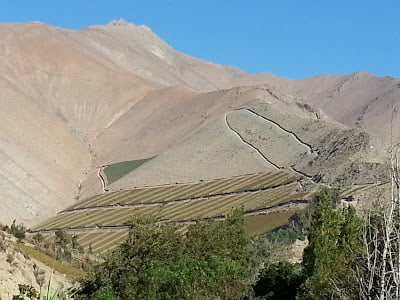 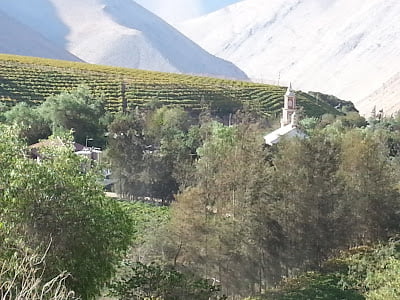 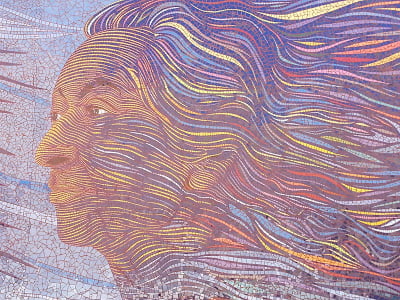 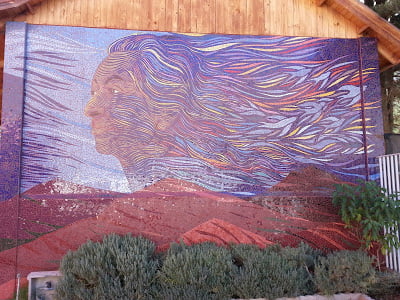 Pisco is a brandy made from grapes grown in the valley.  It is the national drink of Chile.  Gabriela Mistral was the pen name of a Nobelist born in Vicuna, in the valley, in the 1800s.  She is the only South American woman to win, to date, the Nobel for literature.  Mistral Pisco is named in her honour.  This is a mural in the town commemorating Mistral. 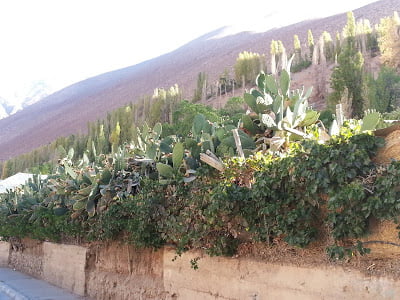