Thursday AM, February 1, we did a little green grocer shopping and, just down the street from where we were staying was a Roman making fresh pasta, so we bought one of his lasagnas, then headed out to the east coast.  We drove south first, through central Tasmania, farm after farm, cattle and sheep, mainly sheep, to a place called Campbell Town, where I stopped for a coffee and a photo opp but darned if there wasn’t even a blooming agapanthus to make a decent photo.  From there we veered off the main route to Hobart, instead going east to the coast.

It was like we were the only car on the road.  The farms gave way to eucalyptus forests.  We decided to count the road kill, which again was significant, mostly wallabies, possums and, er, some unidentifiables, but at 30 we found it too depressing.  I did come to a full stop, in a 100 km zone, to let a hedgehog cross, which took what seemed like an aeon, and this is really the problem; the risk of slowing or stopping on a narrow, no-shoulder, two lane 100 km/h highway versus just hitting the darn things. 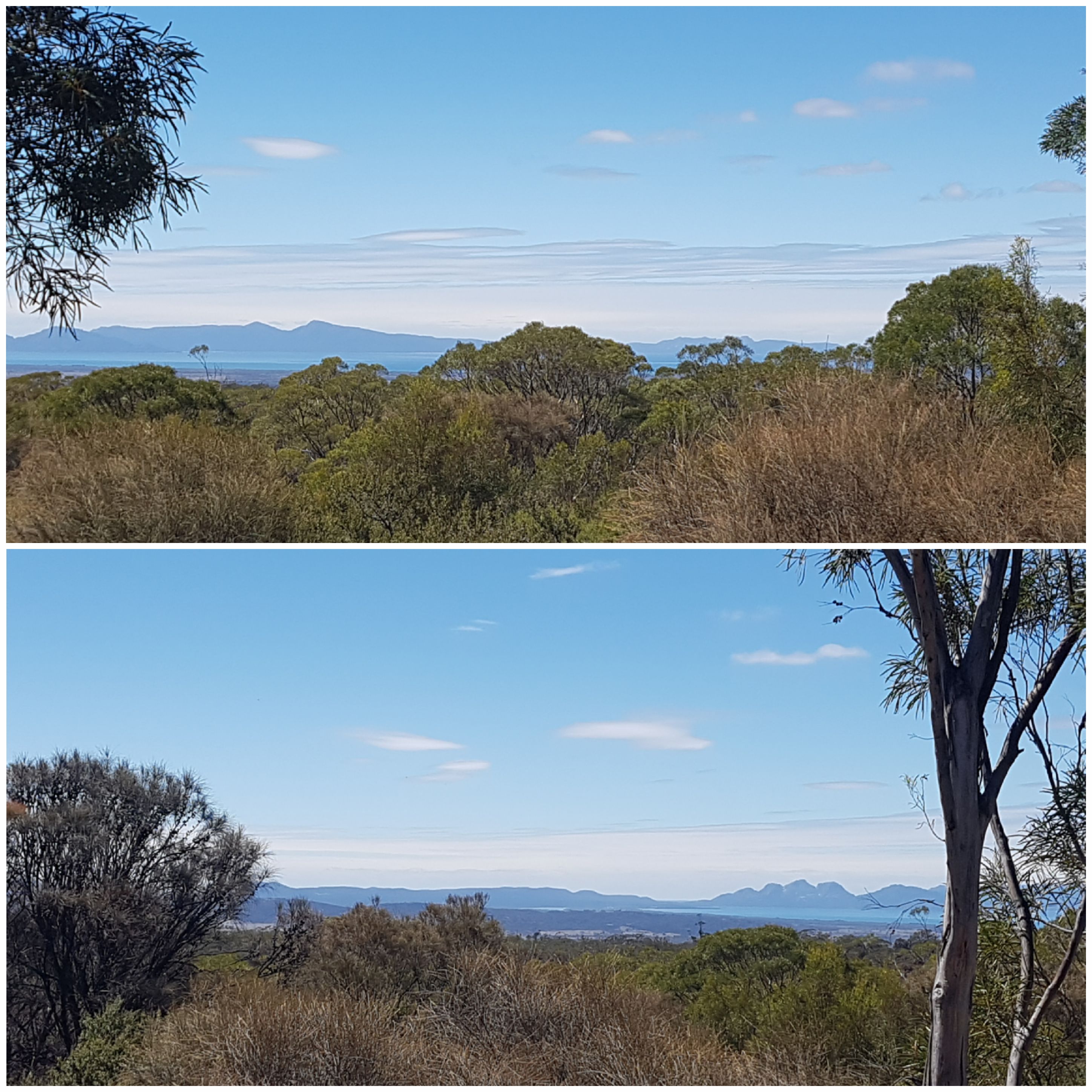 There were no viewpoints along the way, although the views over the trees were beautiful, and here on a siding we snapped a few shots looking down toward the coast.

We landed in a sea town called Swansea around noon.  Very touristy retirement village-ish, but quaint.  I wandered into the local museum and got into a long and convoluted chat with a local on the historical committee who told me about the early UK settlers, convicts, whaling industry, the antique billiard table from the mid-1800s built in Melbourne that could be disassembled mortise and tenon style into 65 pieces and on which the WWI returning soldiers used to pass their time.  The museum had been many things, initially the school house.

I was taken by the rules of conduct for teachers lured to the colonies.  Here are some rules for teachers from 1879: Make your pens carefully.  Whittle nibs for children’s individual needs and preferences.  After 10 hours in school, you may spend the remaining time reading The Holy Bible and other good books.  Gentleman teachers may take one evening off for courting purposes and two evenings to attend church.  Lady teachers whom marry, or engage in unseemly conduct, will be dismissed.

In the pre-union days, teachers were also advised to put aside a goodly sum from each wage for their declining years, lest they become a burden on society.  And any teacher who smokes, uses liquor in any form, frequents pool and public halls, or gets shaved in a barber shop, would be under suspicion for their worth, intention, integrity and honesty.

Sounds intolerable.  Not to worry, things had improved a few decades later when in 1915 lady teachers (their term, not mine) were reminded to: Not marry; not keep the company of men; be home between the hours of 8 p.m. and 6 a.m. unless at a school function; never loiter in ice cream parlours; never ride in a carriage or automotive with a man unless he is your father or brother; not to dress in bright colours.  If that wasn’t enough, a woman teacher must under no circumstances dye her hair and must wear at least two petticoats and her dresses must be shorter than two inches above the ankle.

We had lunch at a bakery in Swansea then found our way to our Air BnB.  The enormous swath of Tasman Sea here is the Great Oyster Bay, with Swansea on the west, Coles Bay on the east.  We are semi-off-the-grid at a beach place on Nine Mile Beach, which is a spit that extends north and east from Swansea, nearly touching Coles Bay on the east side, but doesn’t, and this tiny opening creates an enormous lagoon to the north, fittingly called the Moulting Lagoon. 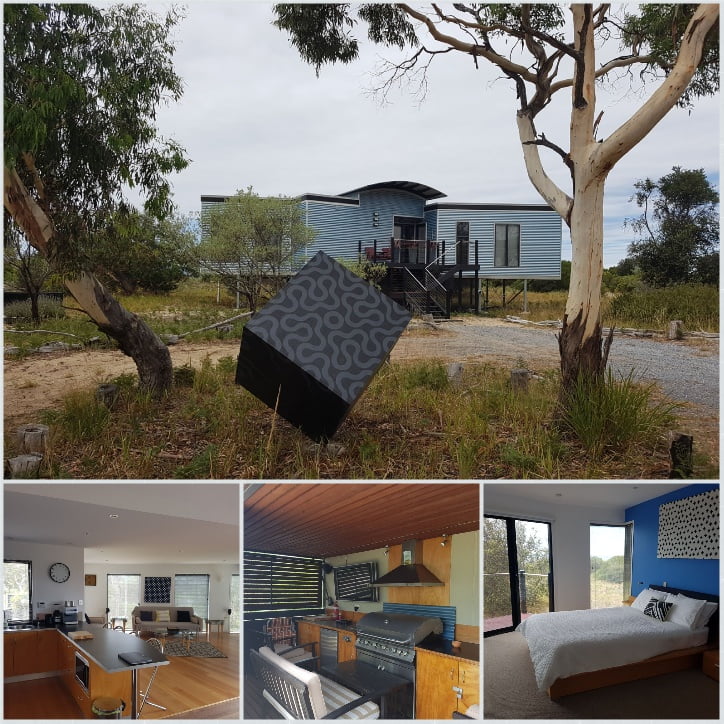 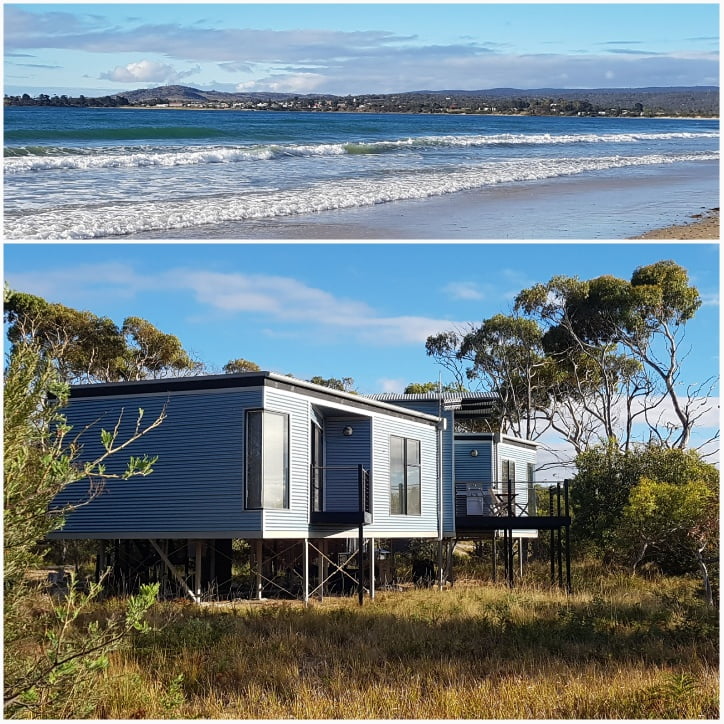 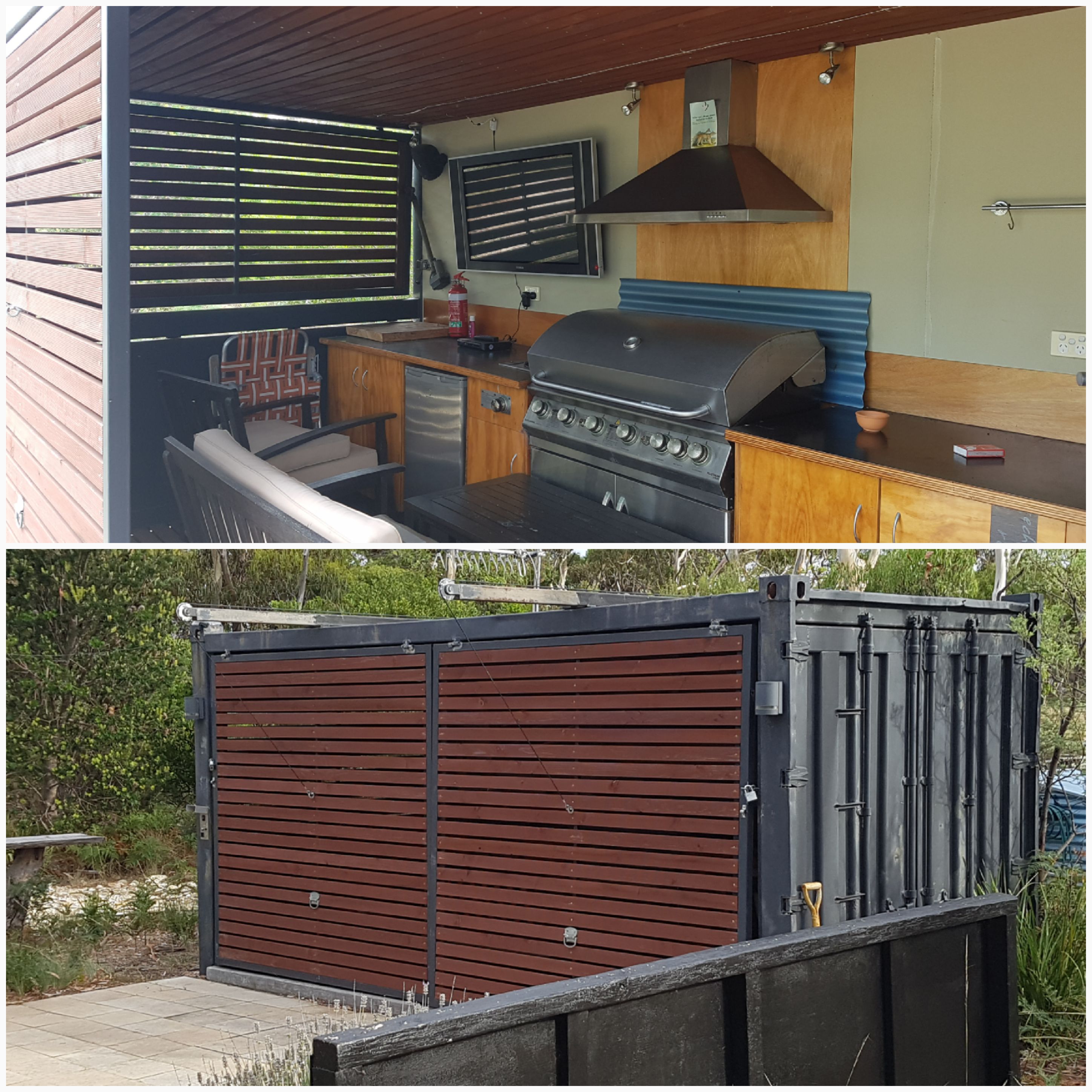 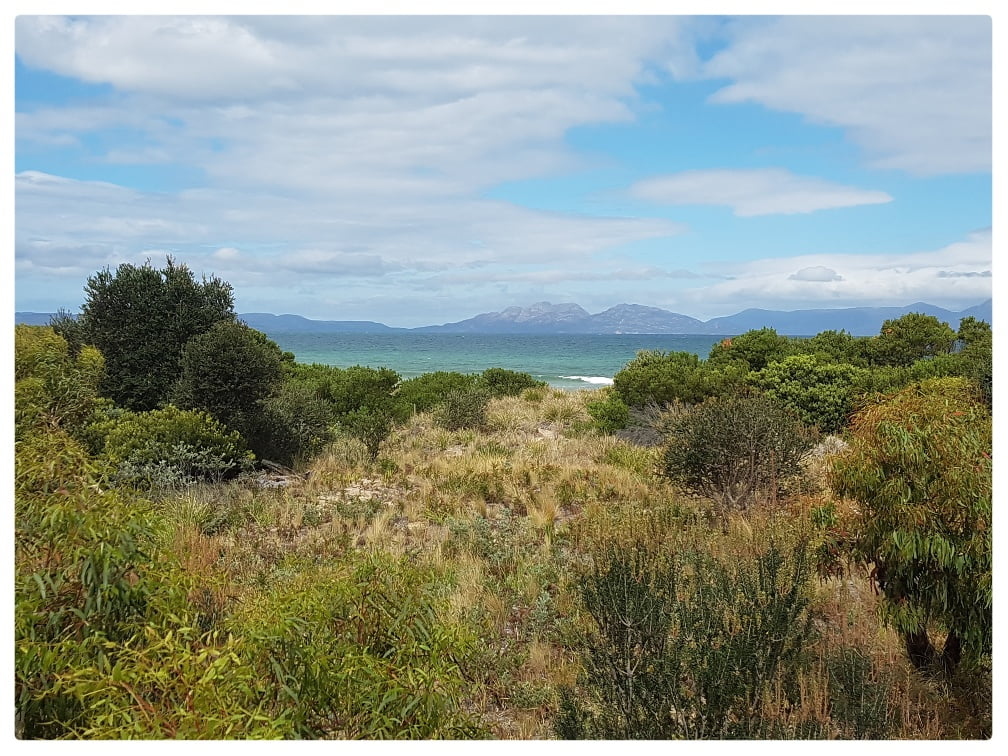 The elevation provides great ocean views as in this pic from the main deck.  Although the surf is tame, the roar is similar to Tofino. 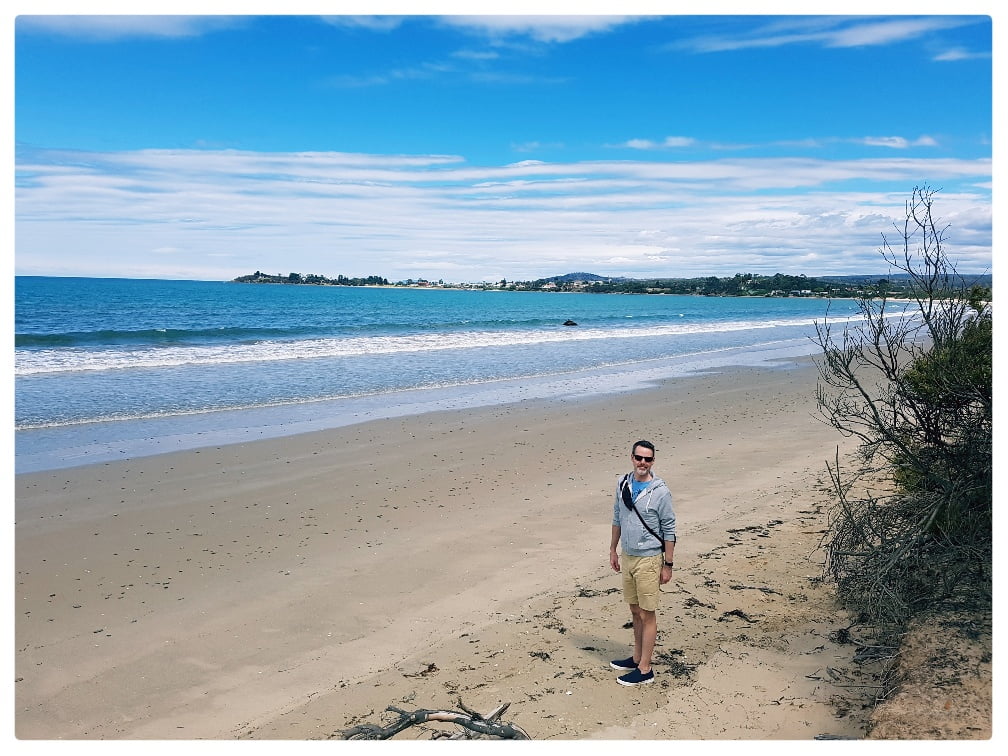 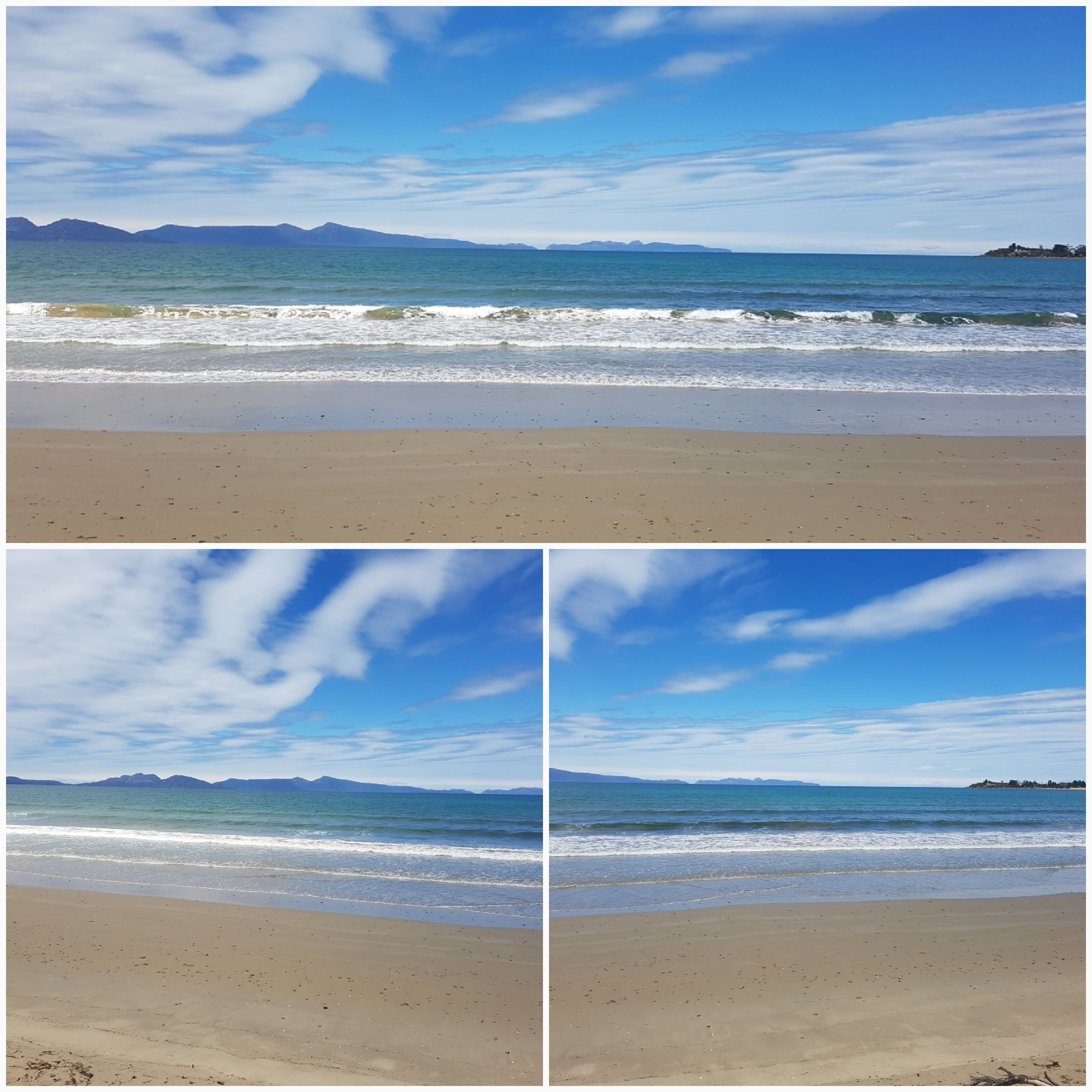 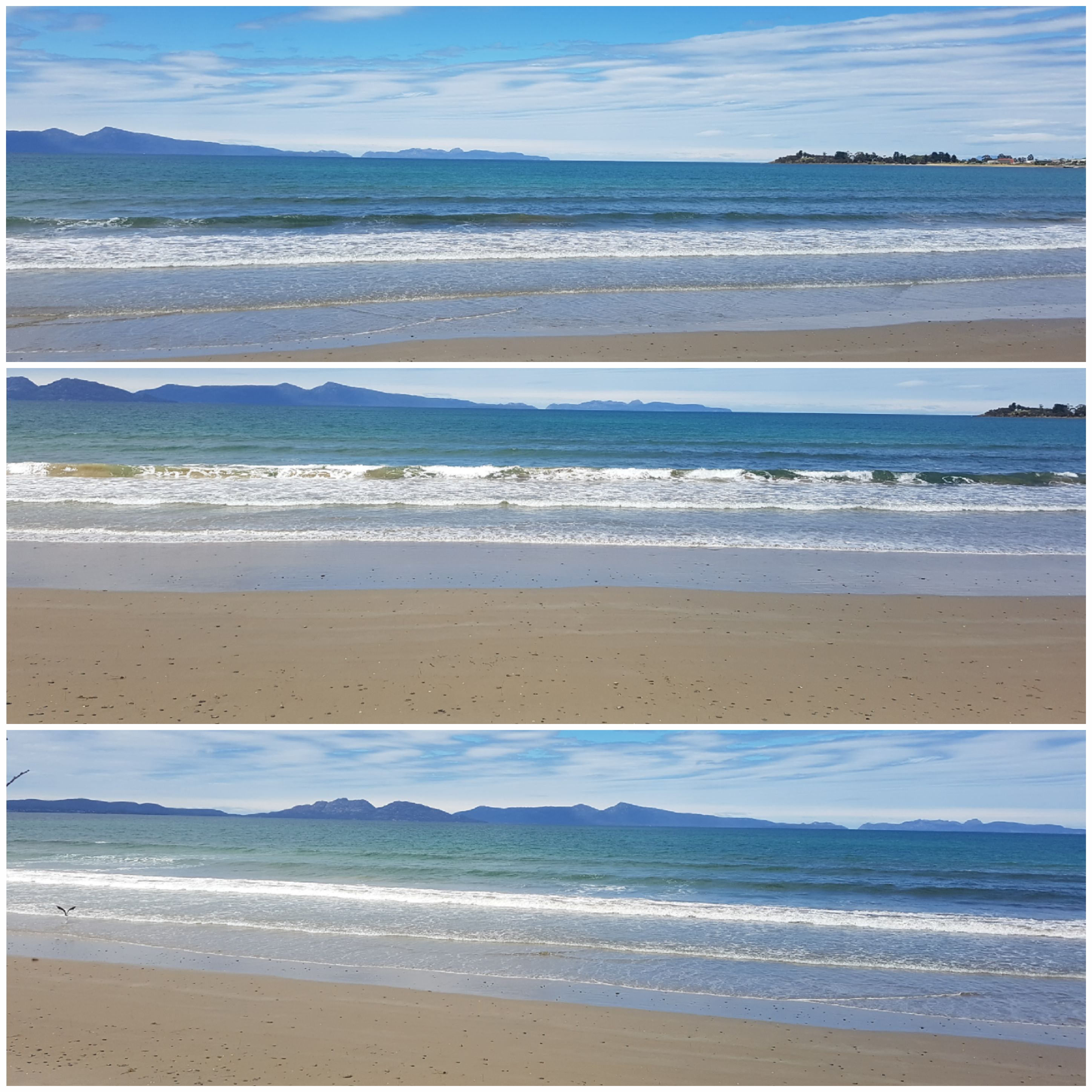 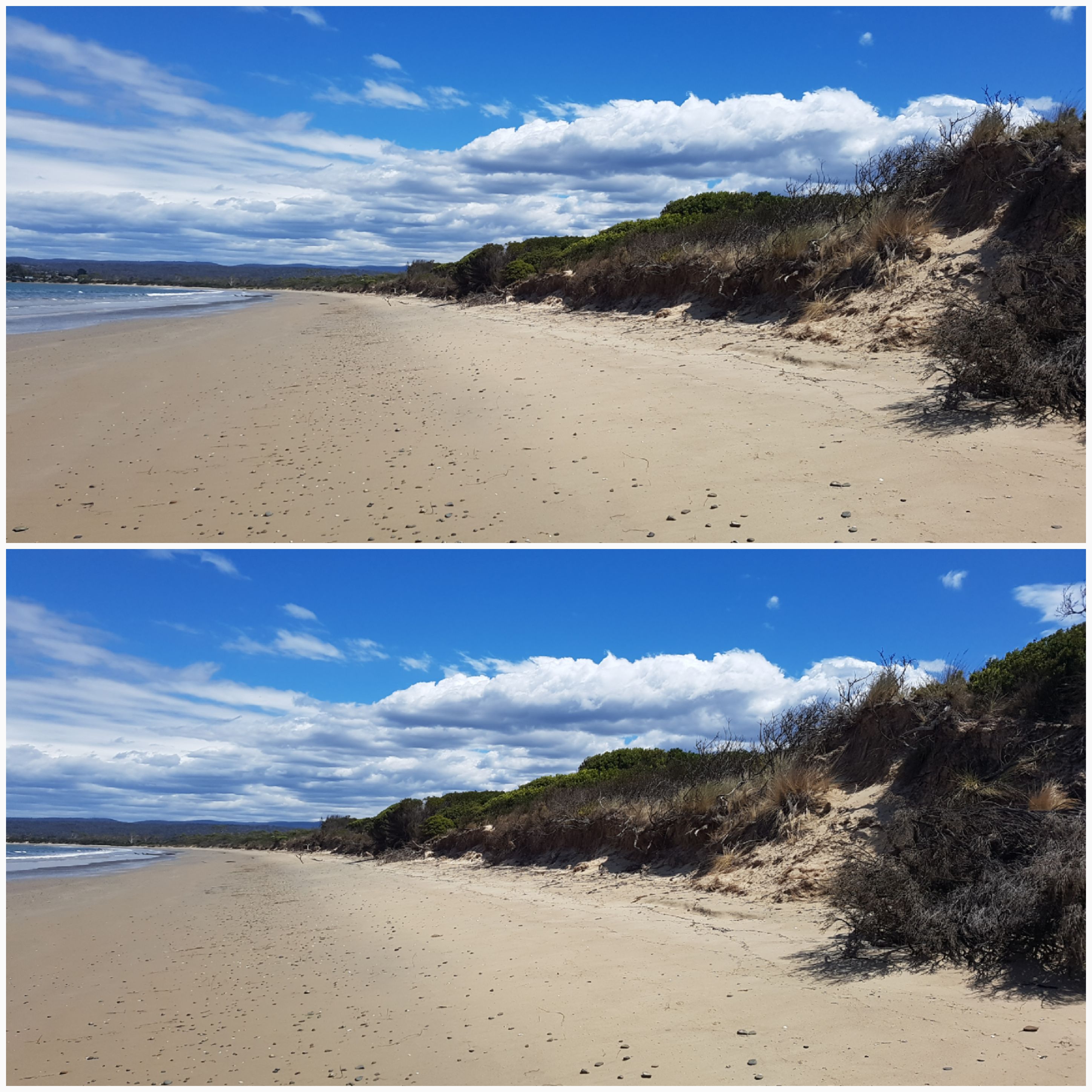 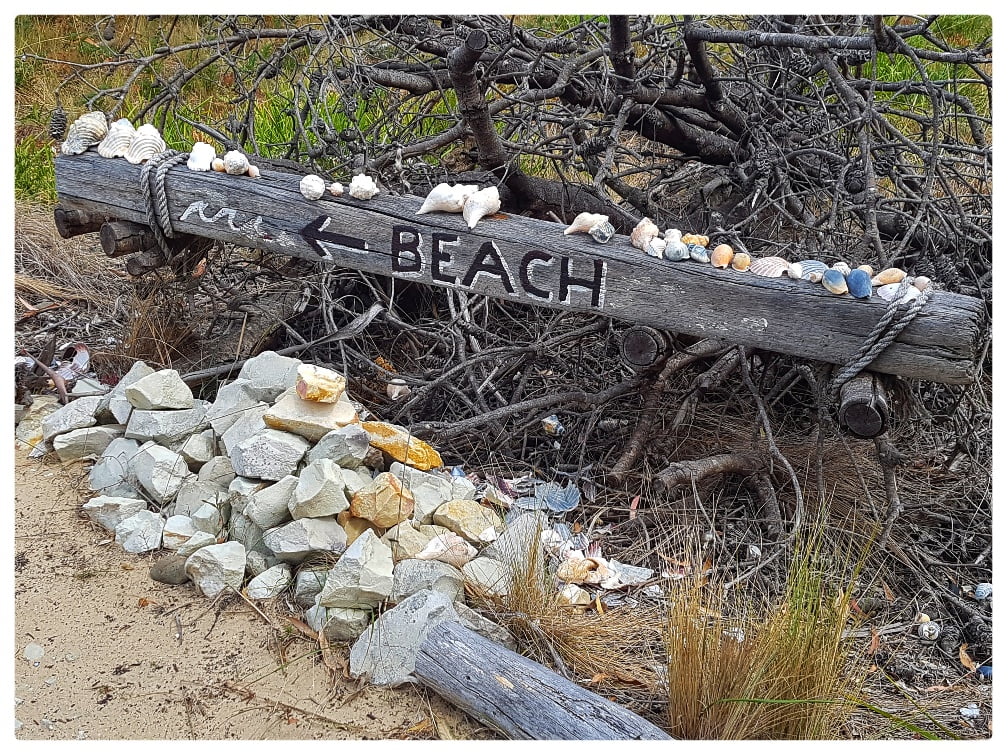 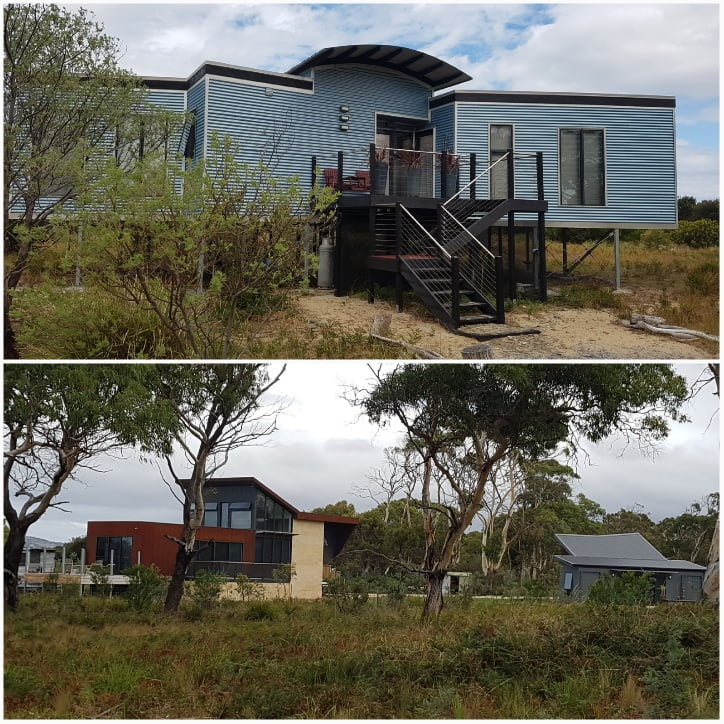 Nieghoubr’s place not too shabby!  There was no WiFi but there was a Smart TV with an elaborate THX sound system, so SS hooked up his iPad and we watched downloaded shows after dinner.