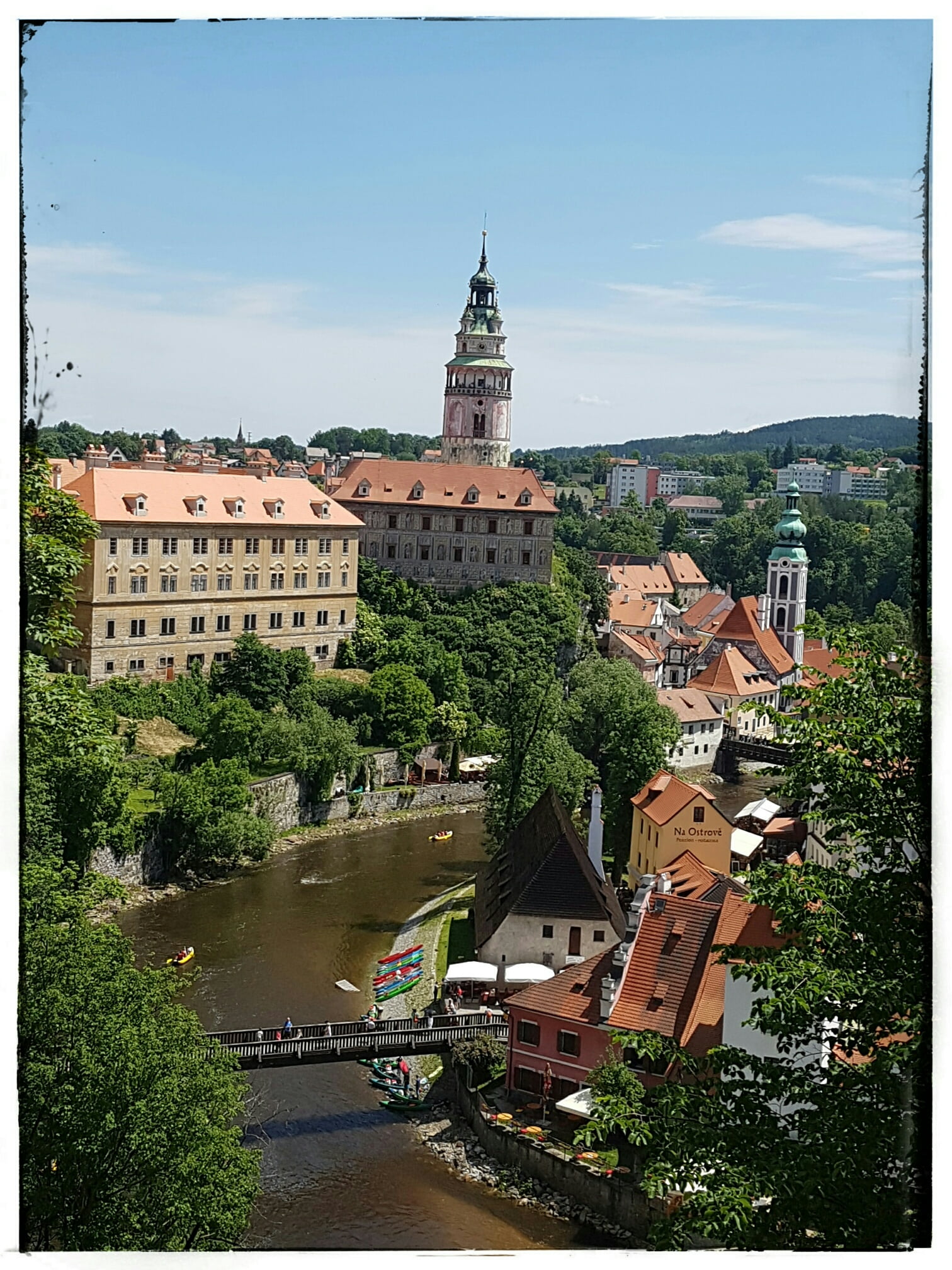 Can you tell it was a beautiful day? 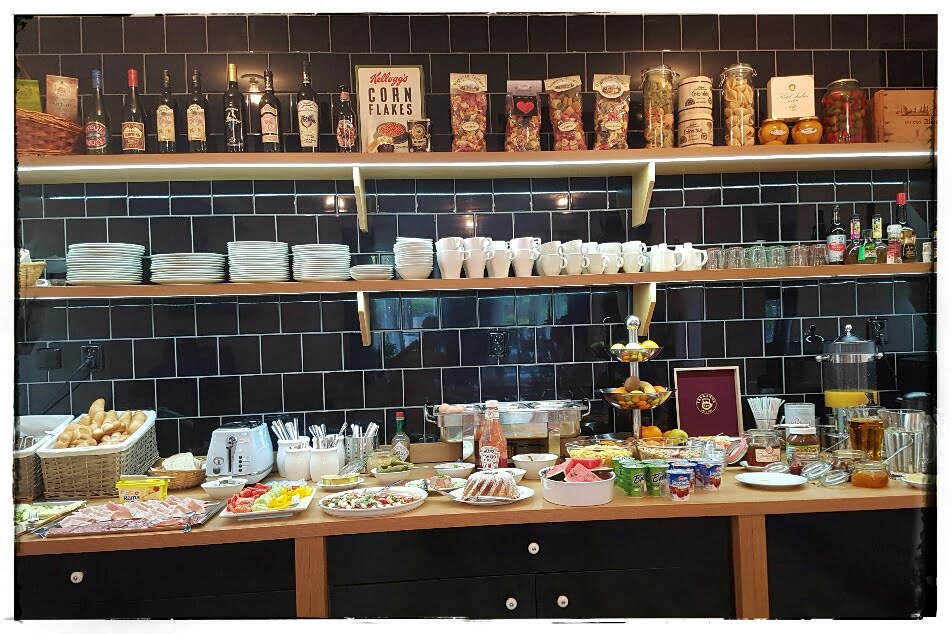 Our pension put on a nice breakfast spread, toast, jam, fruit, yogurt, eggs, meats, cheese, cereal, coffee, tea, hot chocolate, crudités (?), salad and, for what reason I don’t know, dill pickles.  On the way to CK I asked the driver (he turned out to be the mayor’s son, there are, according to him, over 100 drivers in the tourist season, just for the shuttle service he works for, and, he said, up to 16 buses a day from Prague to CK), I asked the driver which nationality visited CK the most.  He said the Chinese and Koreans.  I was surprised to hear that but not a) at breakfast, where seven of the ten rooms in our tiny pension turned out to be Asian, and not b) in CK today, in a sea of selfie sticks and parasols and the least sensible shoes to be wearing on medieval cobblestone. 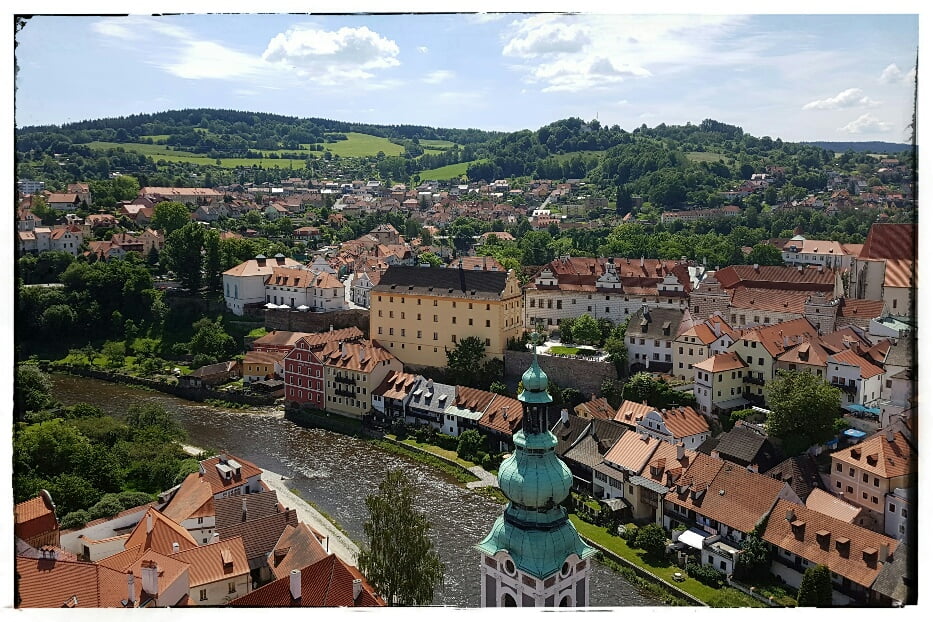 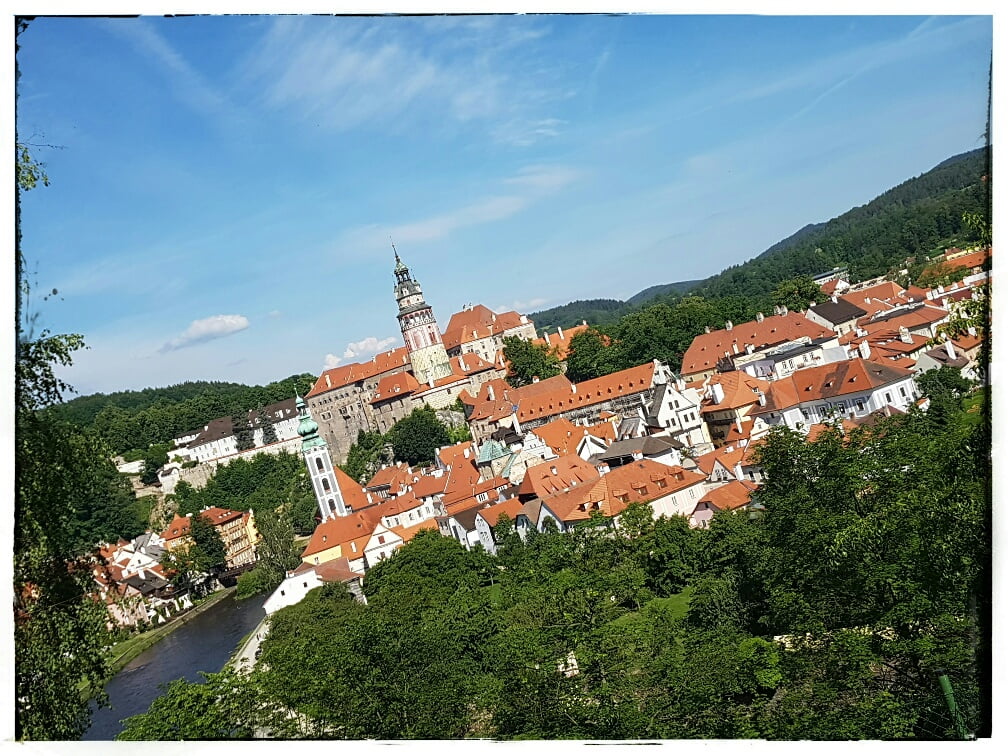 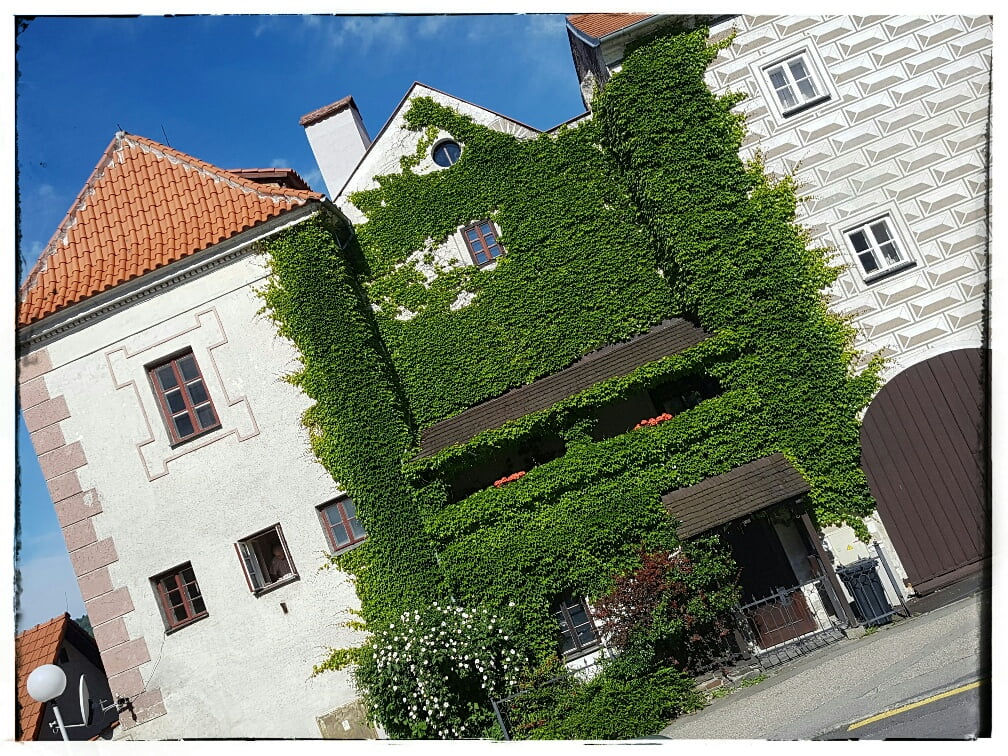 This ivy strewn home is adjacent to our pension.

We did today what virtually all tourists do, the castle.  You can’t just wander about, you must do a guided tour.  This in itself was strange.  The guide carried a wad of huge archaic skeleton keys: As you left one room, she locked the door behind you, then as you moved forward, unlocked the door in front of you.  It was, apparently, to keep the group together and avoid theft, but in actuality it was less organizational and more Young Frankenstein.  We had a wonderful tour, and although English was a challenge for her (the three syllable tapestry was the four syllable tapas-terry, and the word eaten was ate-in as in “dinner was ate-in at the table) it was enormously informative.  We both particularly liked how each room was more or less configured as to how the aristocracy lived.  The castle predates toilets; there were none, neither were there bathrooms.  What’s the old saying?  Queen Elizabeth I took a bath once a month whether she needed it or not.  Not so in CK. 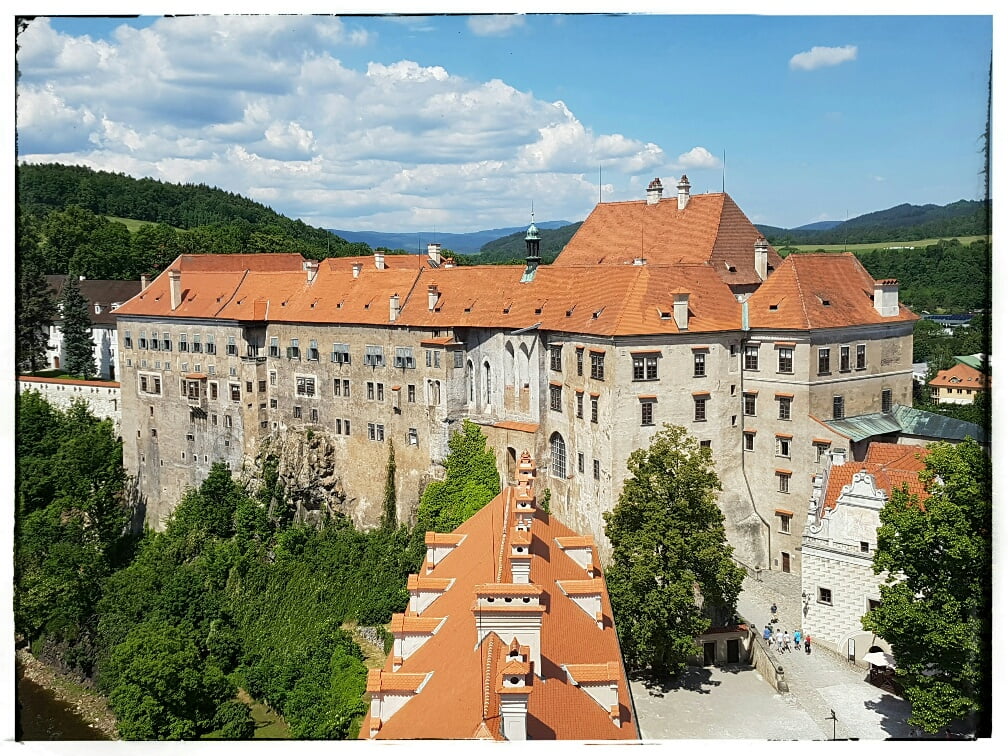 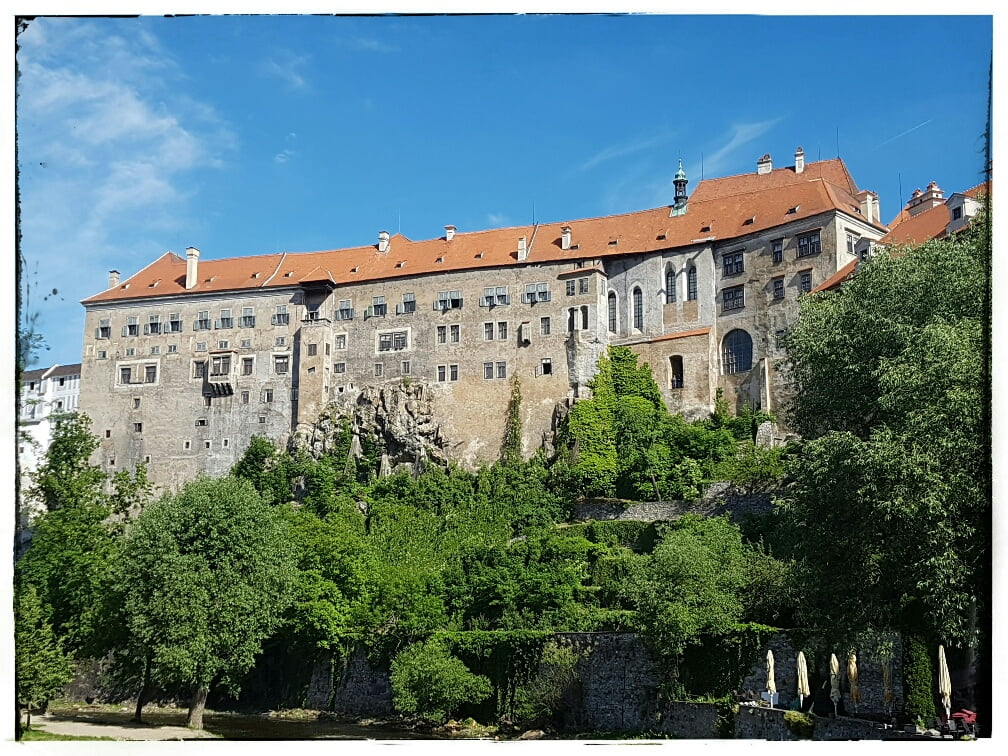 No pictures were allowed on the tour.  Shame.  At the end, you visit the most extreme and extravagant “masquerade” hall where there were masked dances and royal entertainments. 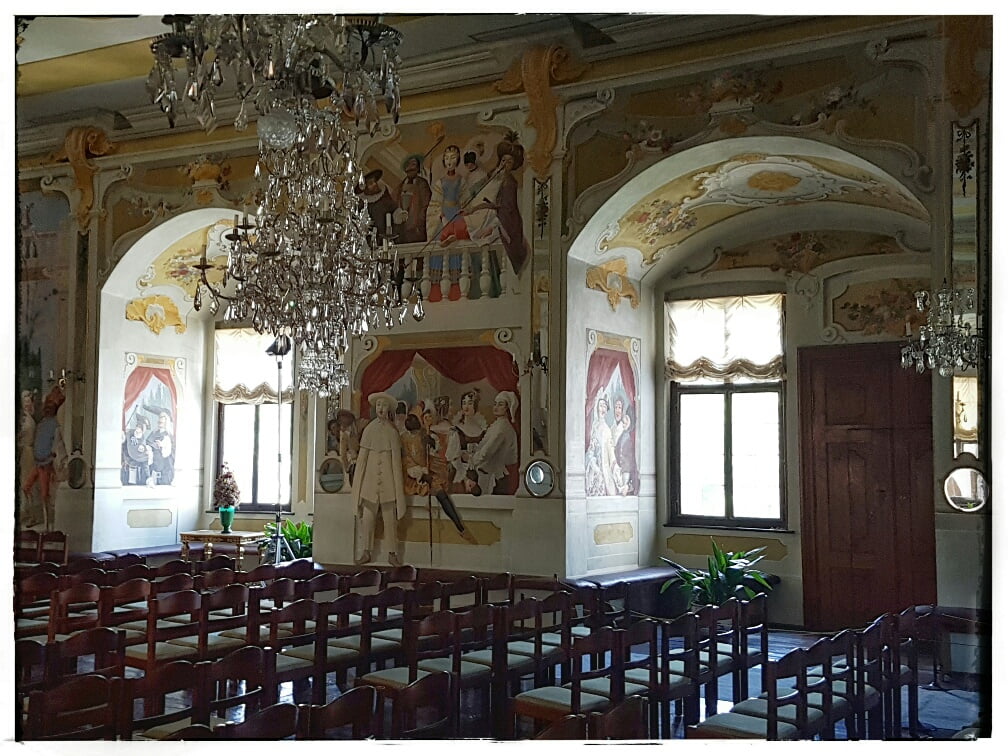 This “accidental” shot of the masquerade hall shows some of the inventive frescoe-ish drawings which adorn the room.  The original candlelit crystal chandeliers have never been adapted for electricity. 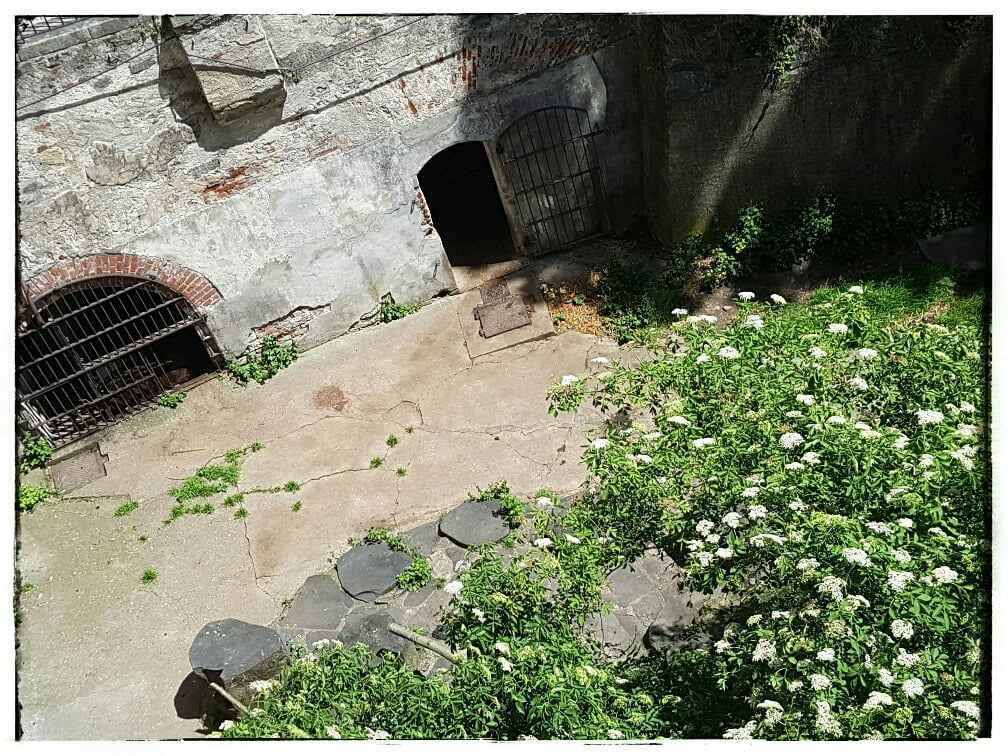 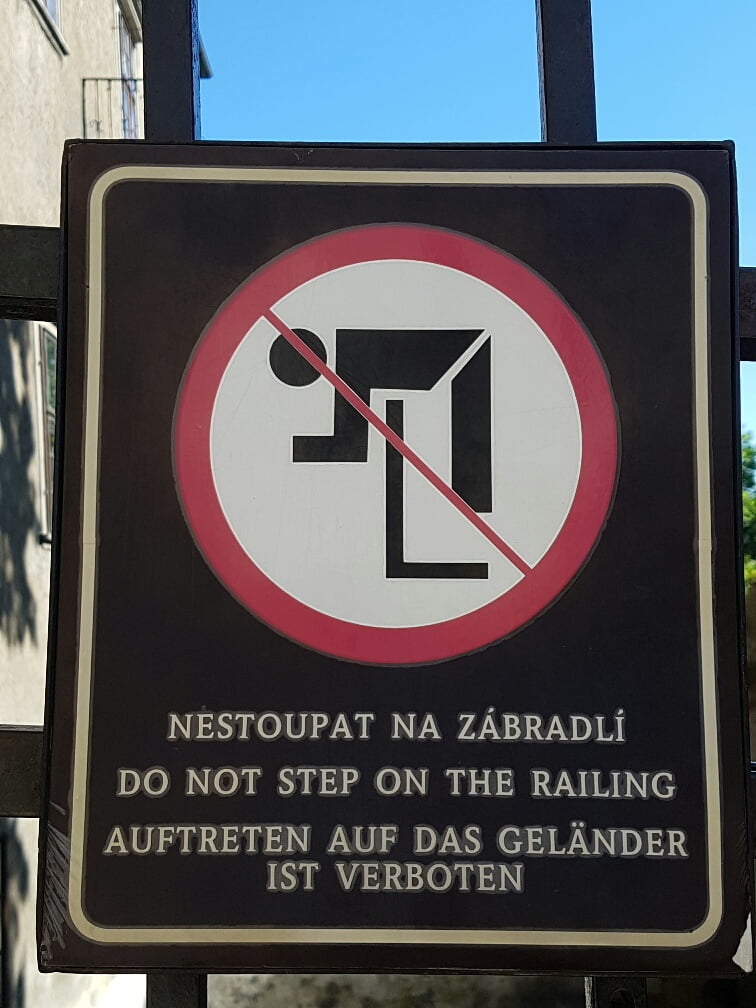 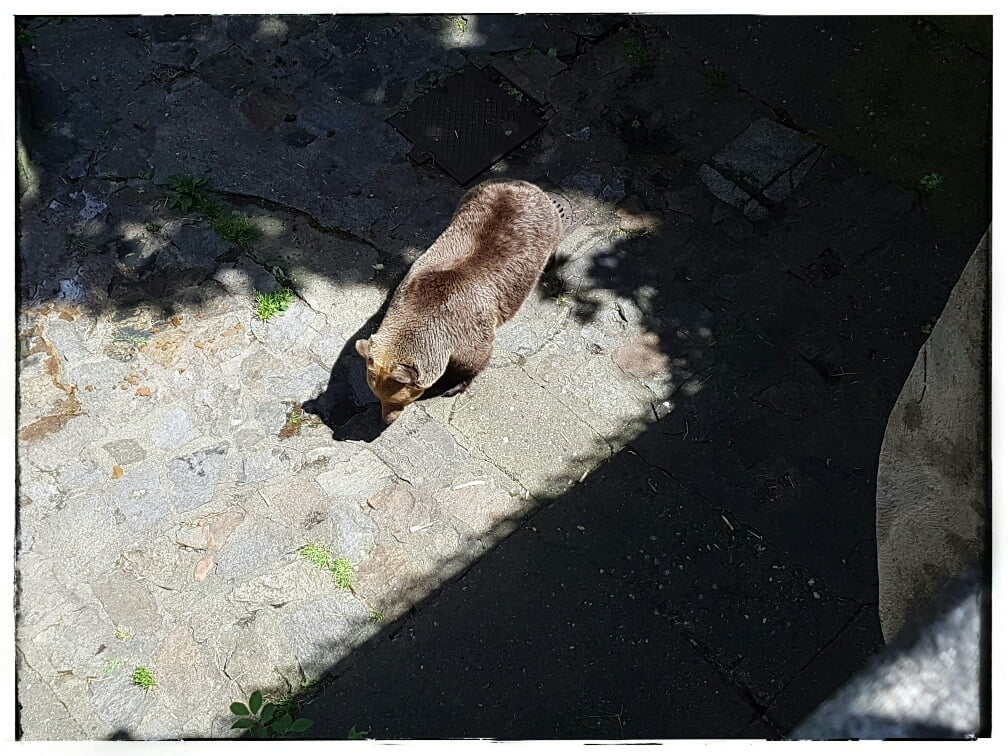 The moat is a bear pit.  Has been for centuries.  When the bears die they make a nice bear rug.  I won’t weigh in on the habitat, although it is, thankfully, large.

After the tour proper we paid about $2.50 Canadian to go up the tower.  It didn’t compare with Vienna, but it was still crammed and a difficult climb for most. The views were exceptional. 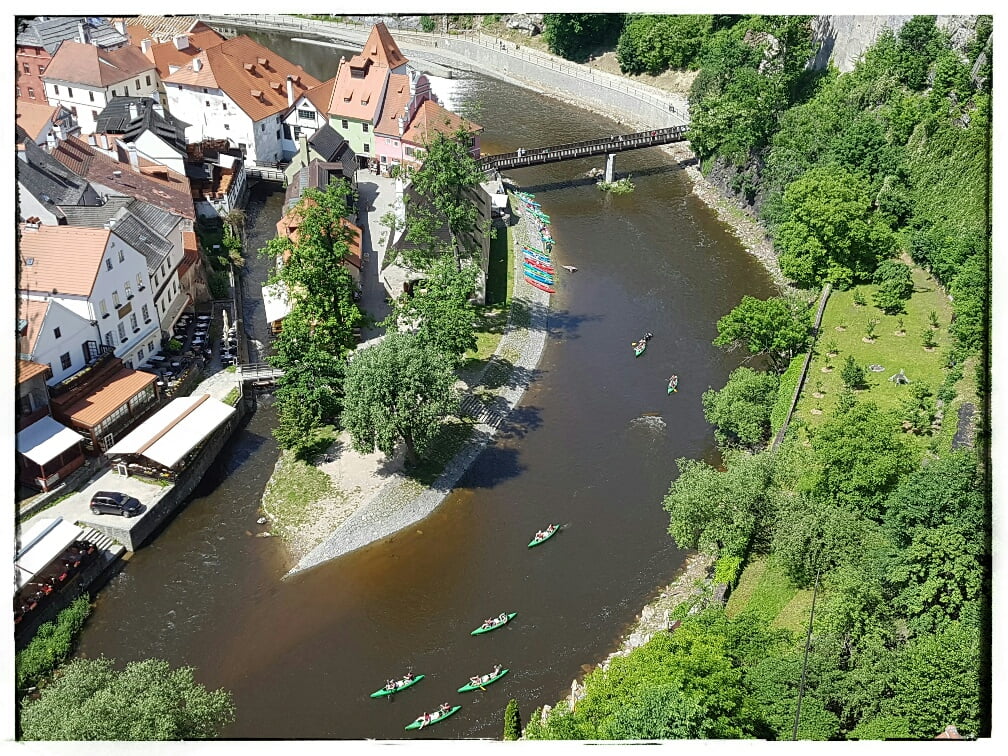 When you’re bored with the cultural slog, you can rent a canoe or raft for the river. 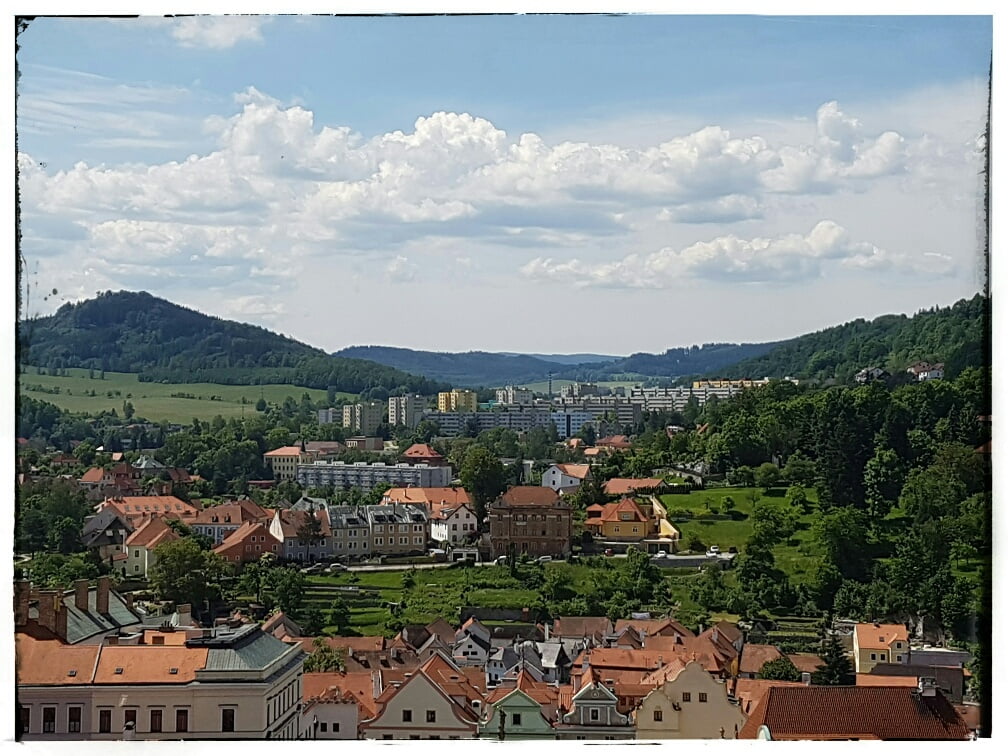 Beyond the heritage city lie apartment blocks reminiscent of the communist era. 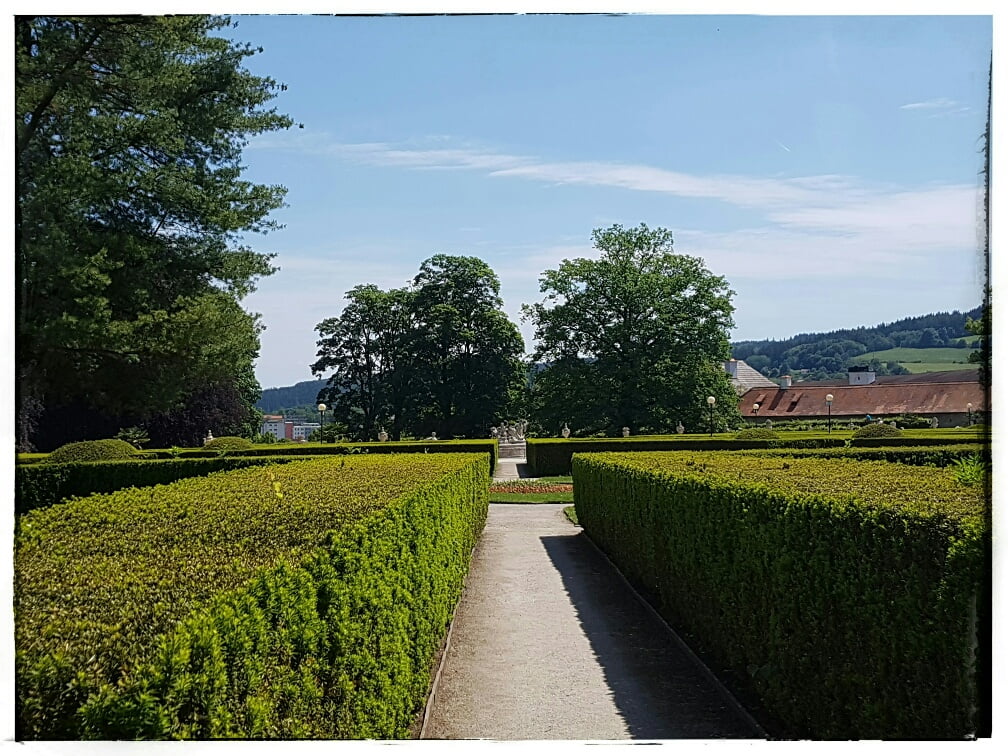 After the castle tower we walked the gardens.  I don’t know how to convert meters, 150 wide, 750 deep, but it seemed somewhere between 20-30 acres.  The front, the parterre, has been largely reconstructed since 1996.  The pre-restoration shots show absolute ruin. The back portion of the gardens are wild and lovely.  Mature beech, elm and other trees frame the trails. 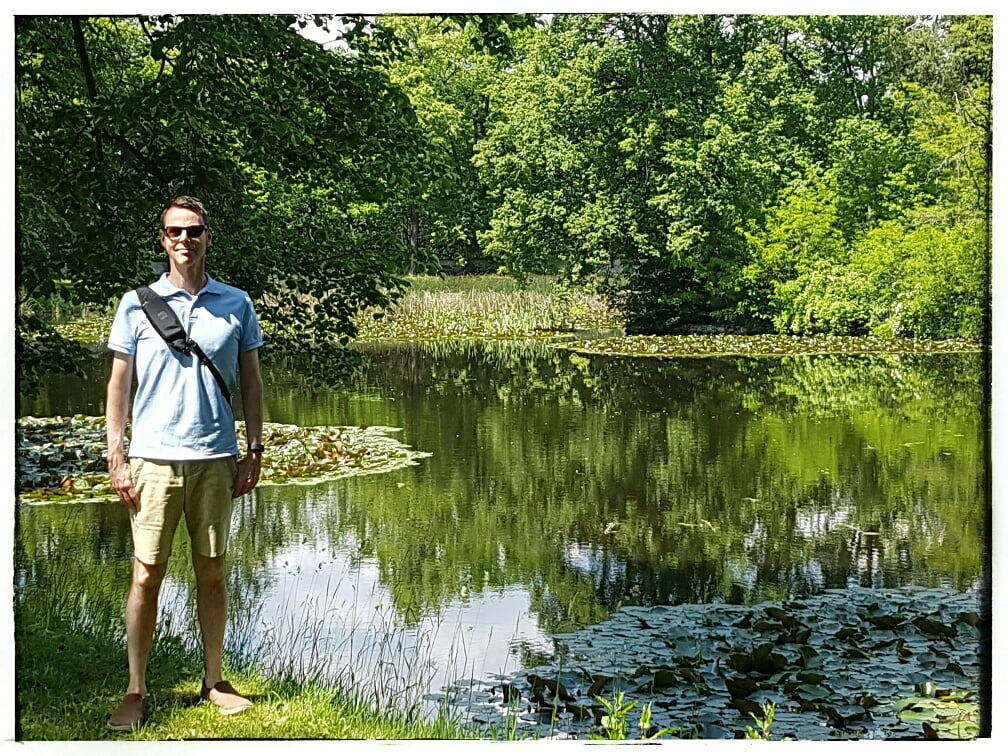 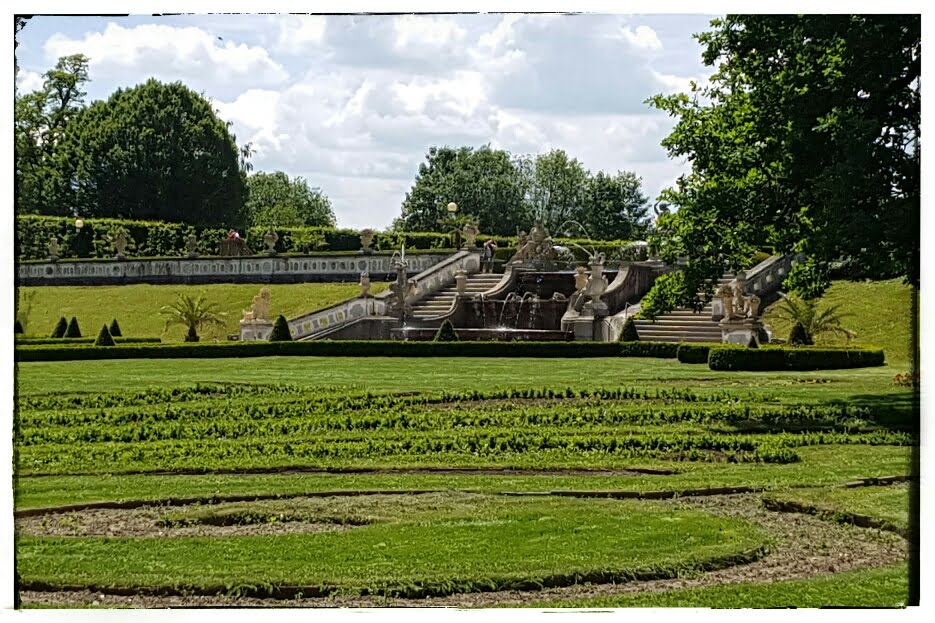 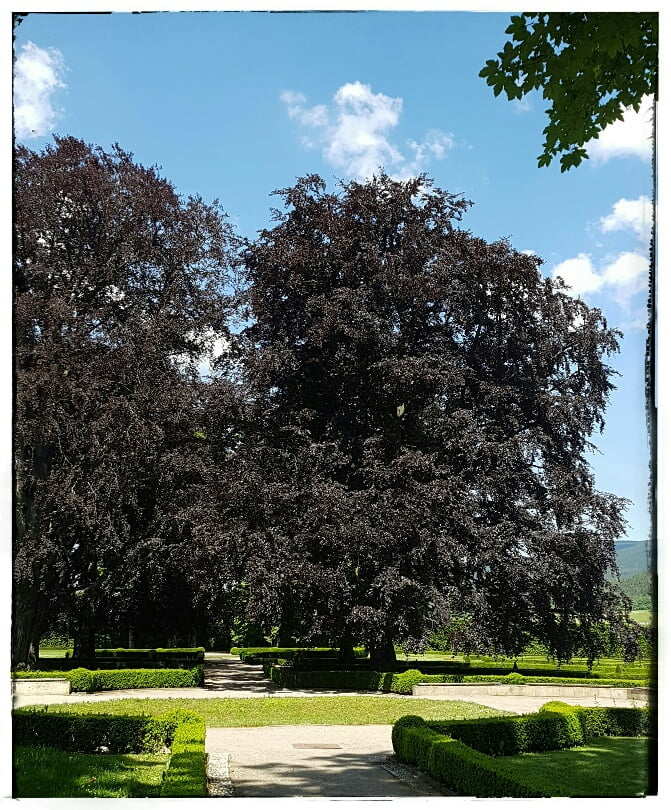 We walked to the very end (alone, the tourists didn’t bother), and walked out the back exit.  It was the middle of nowhere. 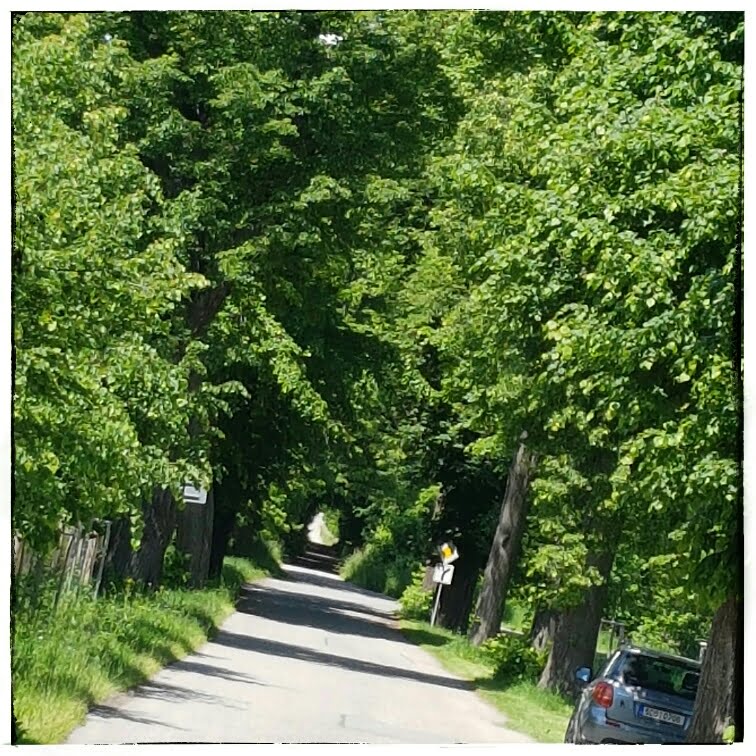 From thousands of tourists at the start of the gardens… 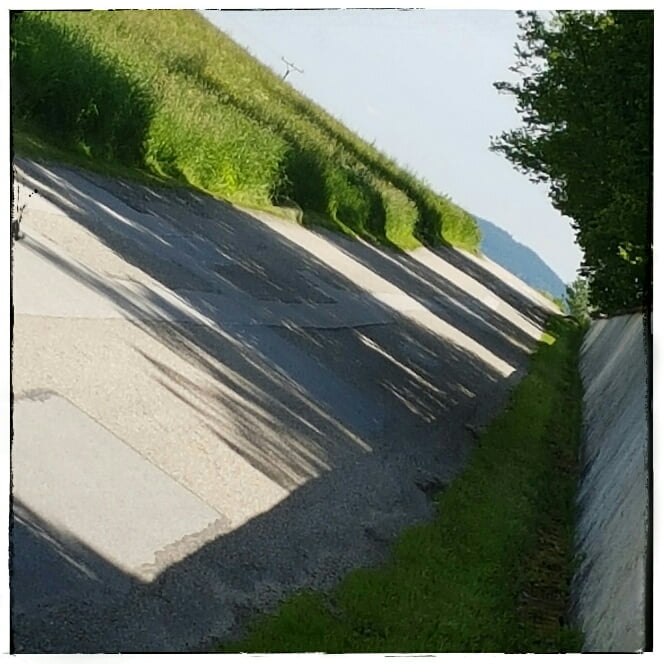 …to empty fields and nary a soul at the other end.

For lunch we ate on the terrace facing a public park in a place called Depot.  As is often the case, we had some issues deciphering the menu.  For example, beer came as a) beer, b) small cut, c) milk pour, d) smooth pour half a liter and e) smooth pour full liter.  They had beer directly from the tank or beer from the keg.  They also had wine.  Wine from the box.  Let me put it straight: The Czechs give wine from the box a bad name.

The menu, in catering to the modern tourist, numbered major allergens, then put those numbers beside the food.  So you had, e.g., wheat, eggs, fish, peanuts, soy, milk and nuts.  Number 9 was celery.  Number 10 was mustard.  Number 13 was lupin.  And, wait for it, number 12 was carbon dioxide.  I had the schnitzel and I’m still going strong.

Following that long lazy lunch under an umbrella, we went back to the castle complex for the theatre tour. Although the tour was just OK, the theatre was over the top.  Have you ever seen those baroque presentations with floating sets, trap doors and candlelight?  There are only two theatres on the planet that have the stage, the sets, the costumes of the baroque period in all their original glory; and the other, in Sweden, has many classical elements.  The actual stage settings, costumes and even the impossibly uncomfortable wooden benches in the stalls, are all authentic at CK; restoration began (very slowly) in 1966 and continues today.  It really is a treasure. Pictures were not permitted; a shame, because this was sensational to see. 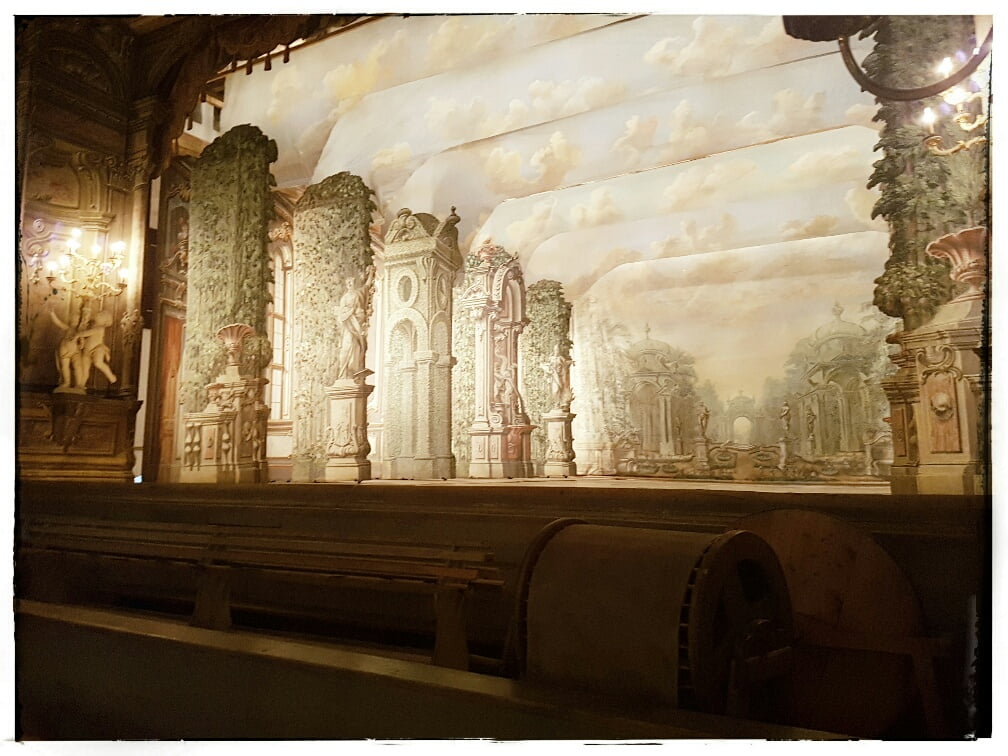 We got to see the restored theatre, some set pieces, make the sounds of thunder, rain and wind, and go under the stage to see the winches and ropes which rotated the sets, the prompter’s box, and the underside of the stage which controlled the “coulisses” or curtains.  We didn’t get to see the costumes, original footlights, or go into the royal box.  This “accidental” photo shows some of the set pieces which would rotate on winches under the stage; the sound machinery is in shadows in the right foreground. 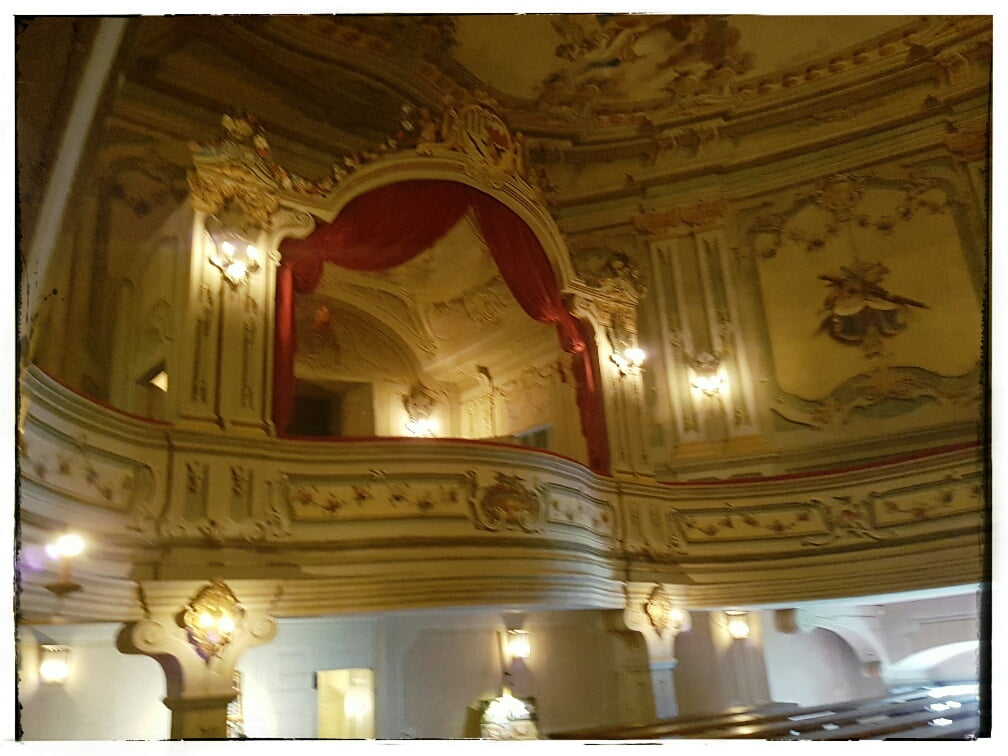 There were other museums and areas to see at the castle but we nixed them. 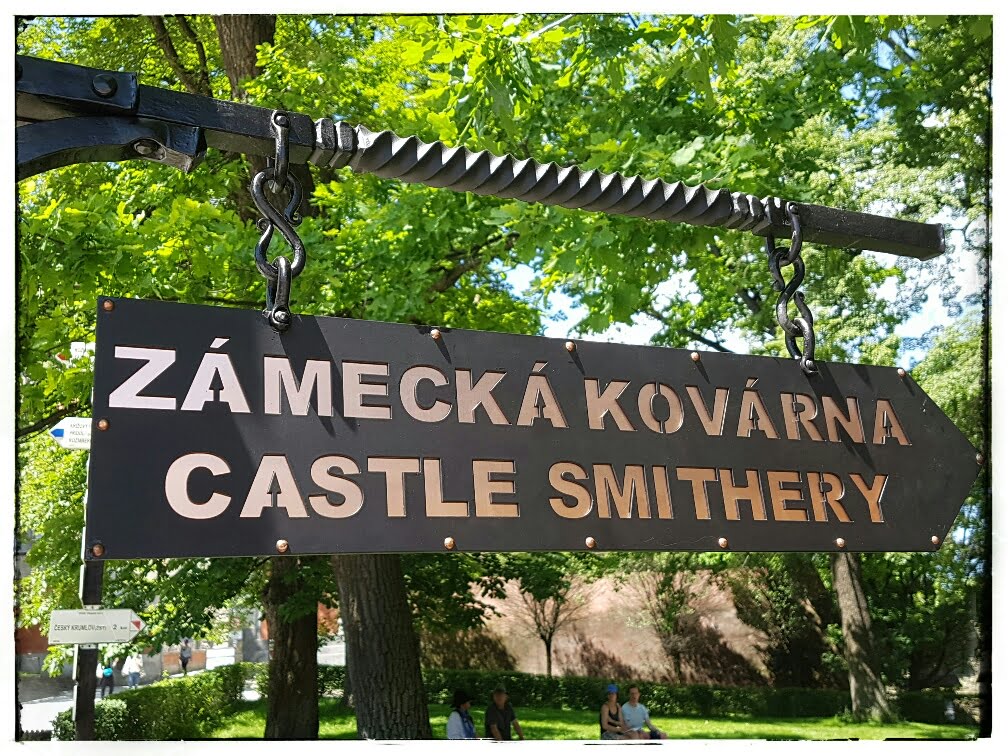 SS said no to the smithery simply because of the grammatically incorrect signage.  So sensitive!

On our way through town we checked out the church, 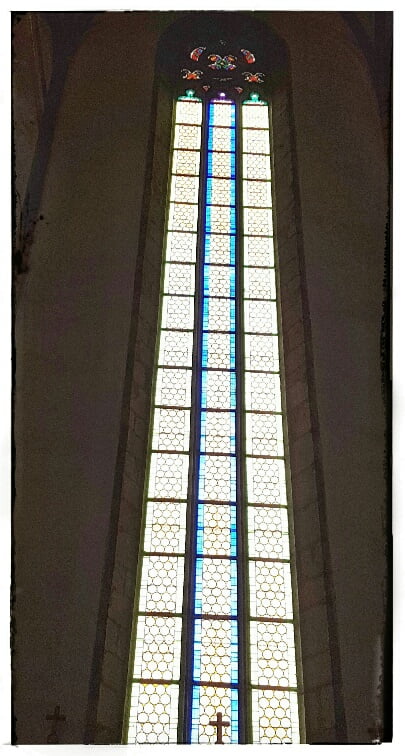 Non-retouched pic.  They were some big windows!  In the late afternoon we enjoyed the garden at the “villa” then took dinner along the river.  There was, again, a gorgeous night sky lit by a bit of moon as we headed back to the room. 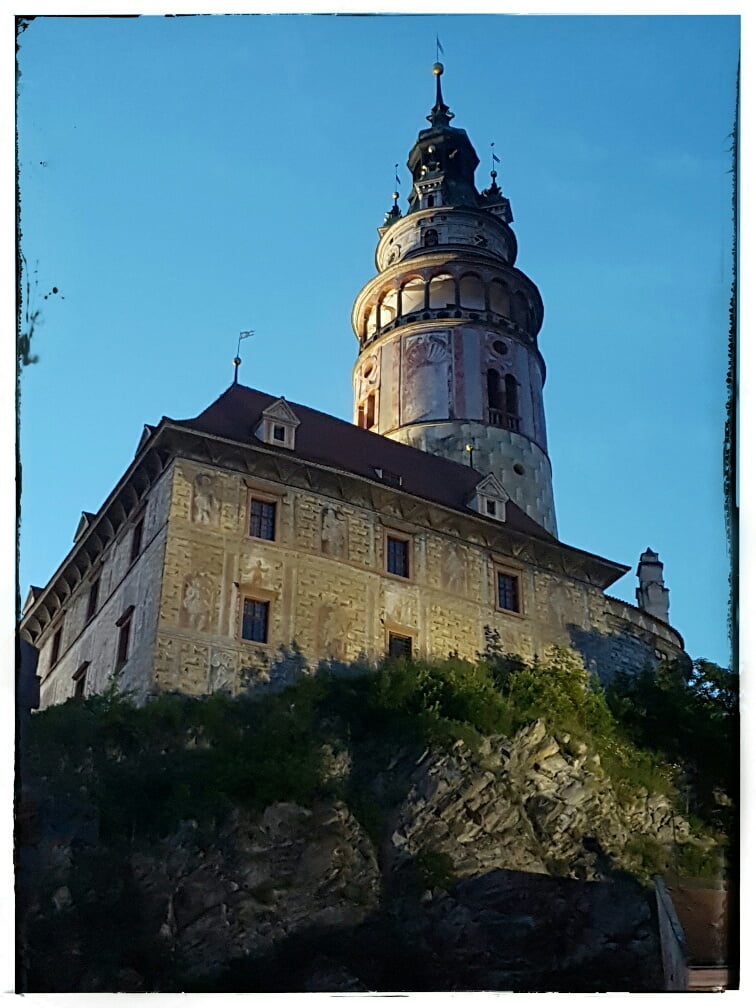