Yesterday 29 degrees, today 21; beautiful weather but mainly a wind of “mistral” proportions keeping it temperate.  Pleasantville in the sun, coolish in the shade.  We didn’t add on (or need, at this point) a hotel breakfast, so were two Nespresso’s ready to hit the road well before nine.  We did what many, most, or maybe what all tourists do in Madrid: We went to the Prado.

The museum opens at 10; there was already a very long line up for tickets well in advance.  But we had bought our tickets from the hotel, so we avoided the line.  Phew. 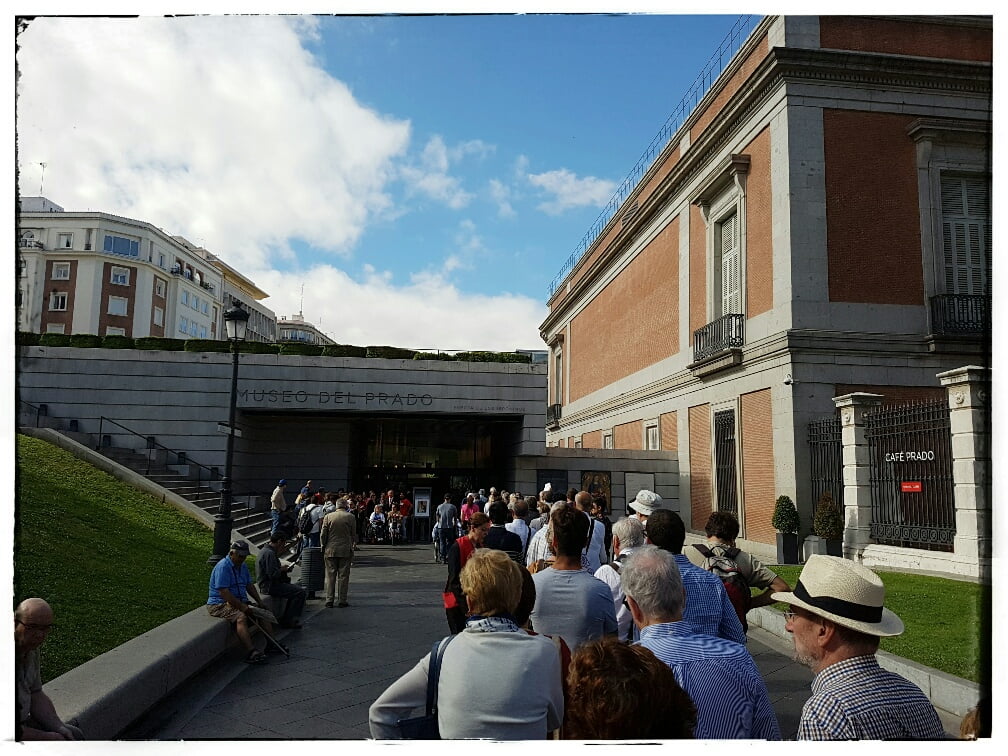 Instead, we joined the next line-up, the line-up of people with tickets, waiting to get in. 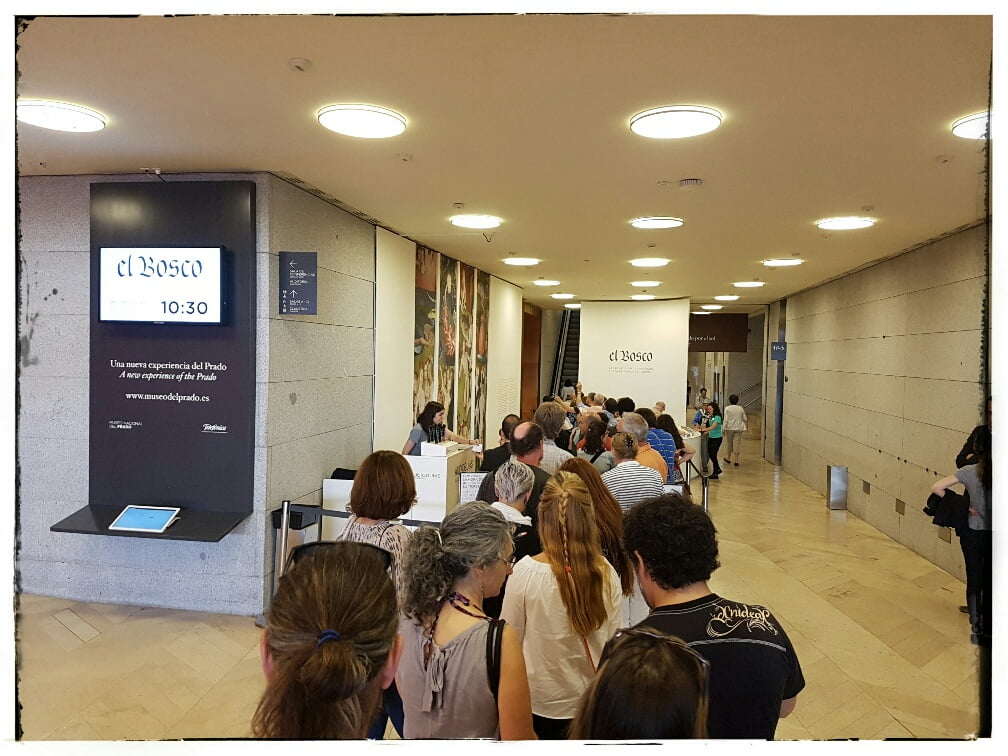 Then, once inside, we waited in another line-up, to see the special “El Bosco” or Bosch exhibition.

There are no pictures allowed in the Prado so the blog won’t be littered with Samsung repros of old masters, but if you are the rare tourist to wander into the adjacent wing and up to the cloister, probably no one will notice if you take a pic. 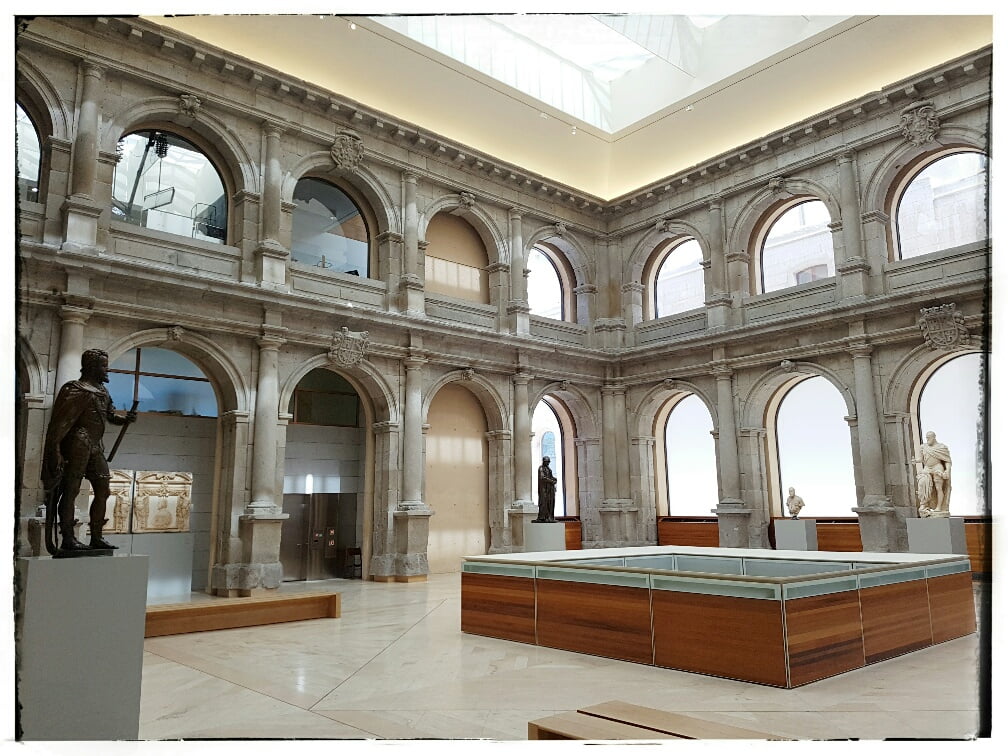 To list the masterpieces, Rubens, Goya, El Greco, Rubens, Raphael, Velazques, Titian, and even more friggin’ Rubens, is perhaps more tiring than listening to the audio explanations, as we did, over three hours in the AM then another in the PM.  How civilized of the Spanish: You can leave the museum for lunch, then return on the same ticket.  The Cardinal, by Raphael, is one of those pictures that when you finally see it in person you need to just soak it in.  But there are also curiosities, Caravaggio look-alikes by artists in his circle, a Mona Lisa (brighter, happier and more colourful) by a pupil of Da Vinci, a Rubens where he modified a finished painting by adding extra canvas—and you can see the seam, and a very quirky Cano, the Miraculous Lactation of St. Bernard where a statue of the Virgin Mary squirts milk from her teat across the plaza to St. Bernard.

The size, of the museum, the size of the actual paintings, mammoth to be exact, added to the volume of art, show that the Spanish court had a very close and enduring relationship with the finest artists on the continent for a very long time. 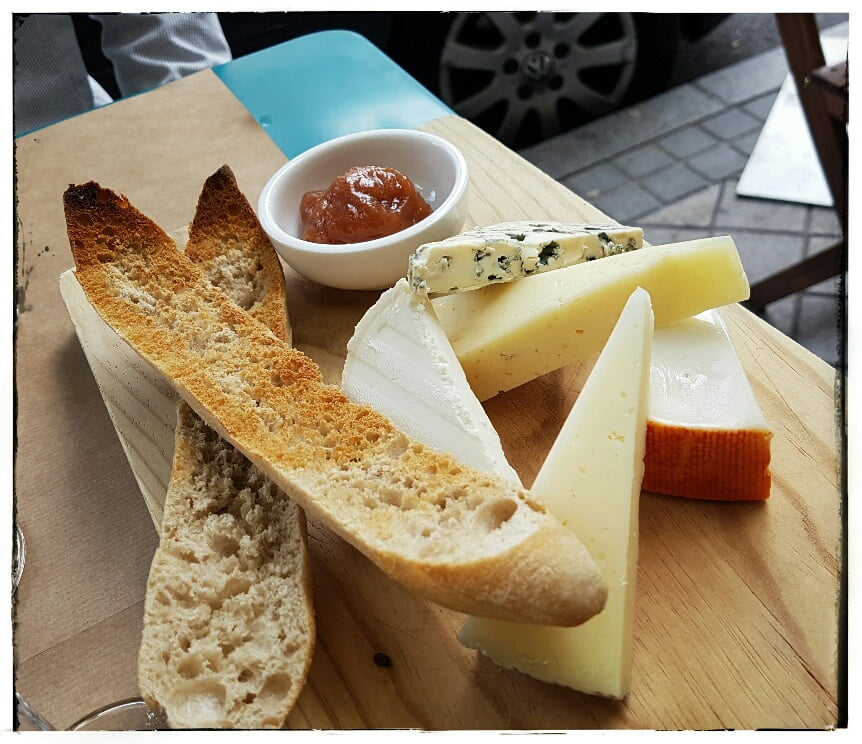 We took lunch just in behind the Prado, at a lovely small café called Murillo.  We started with some local cheese, bread and quince jam. 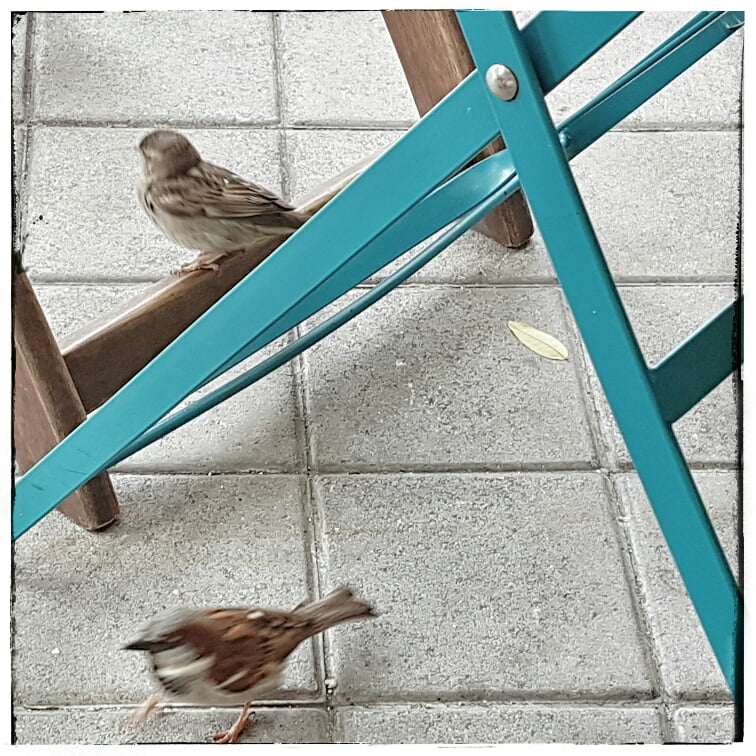 Very persistent and brave sparrows flitted below our table for scraps.  Ever seen a sparrow gorge on cheese?

We returned to the Prado to finish the bucket list.  The absolute over the top most amazing blow away part of the visit was the special celebration, in honor of 500 years of the life of Jheronimus Bosch, a collection of the most Bosch paintings and drawings ever assembled.  Probably every pleb and their dog has at some time seen a poster, a t-shirt, a tea towel, with a reference to his The Garden of Earthly Delights, but to see his work, even his nominal sketches, up close, was beyond description.  One painting, through laser tech, shows how Bosch painted over the patron to whom he was under contract to paint for, with a flesh eating plant. 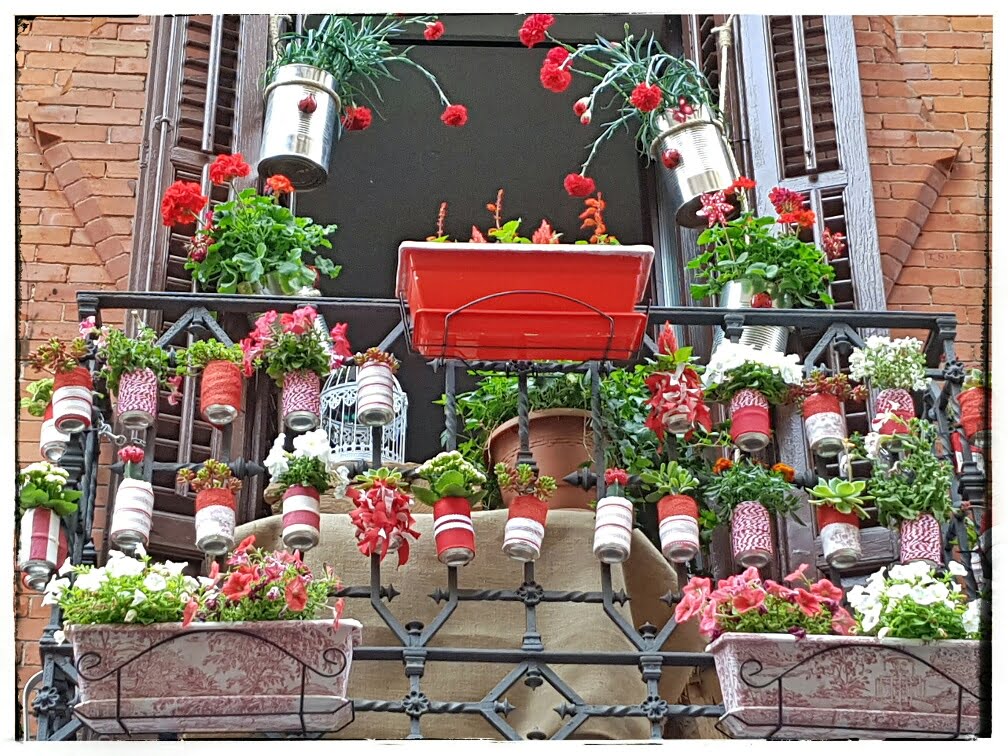 Mid-afternoon we left the culture behind and wandered into the old city. Just regular non-allegorical plants on view. 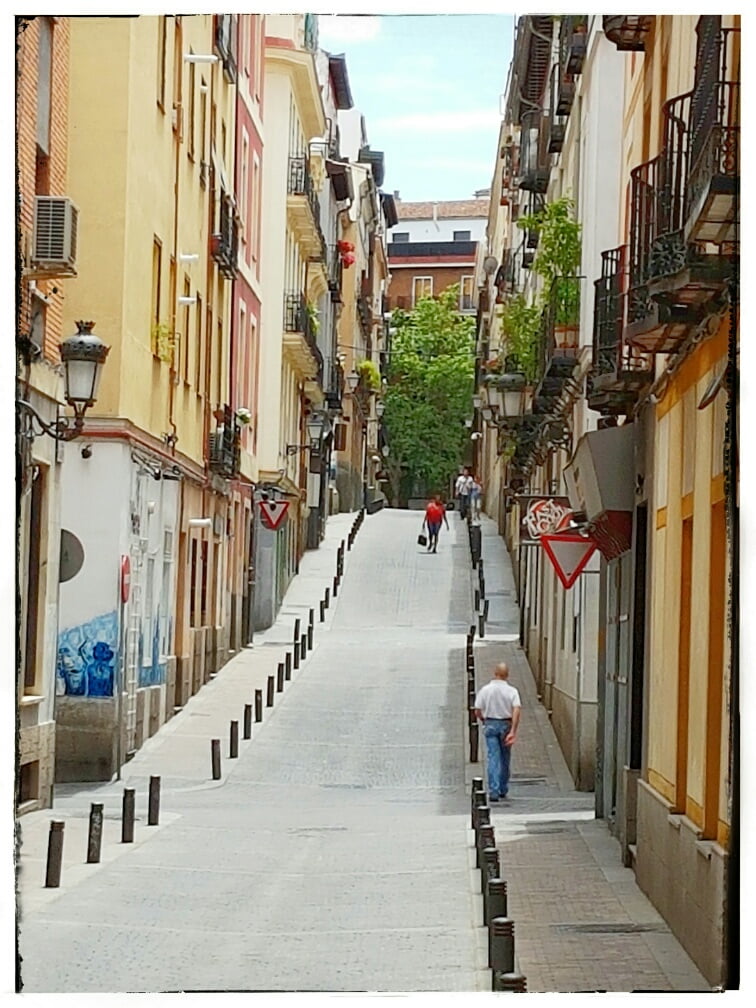 Streets without tourists; compared to Prague, Madrid looks like a ghost town. 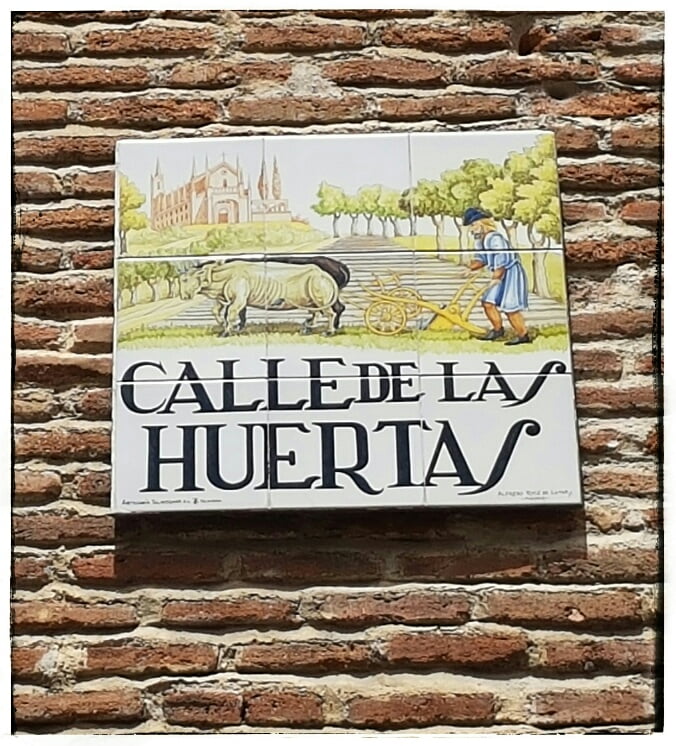 The street signs in the old town depict what the street or neighbourhood meant.  We wound our way up and down a number of narrow streets, until eventually we reached Plaza Mayor. 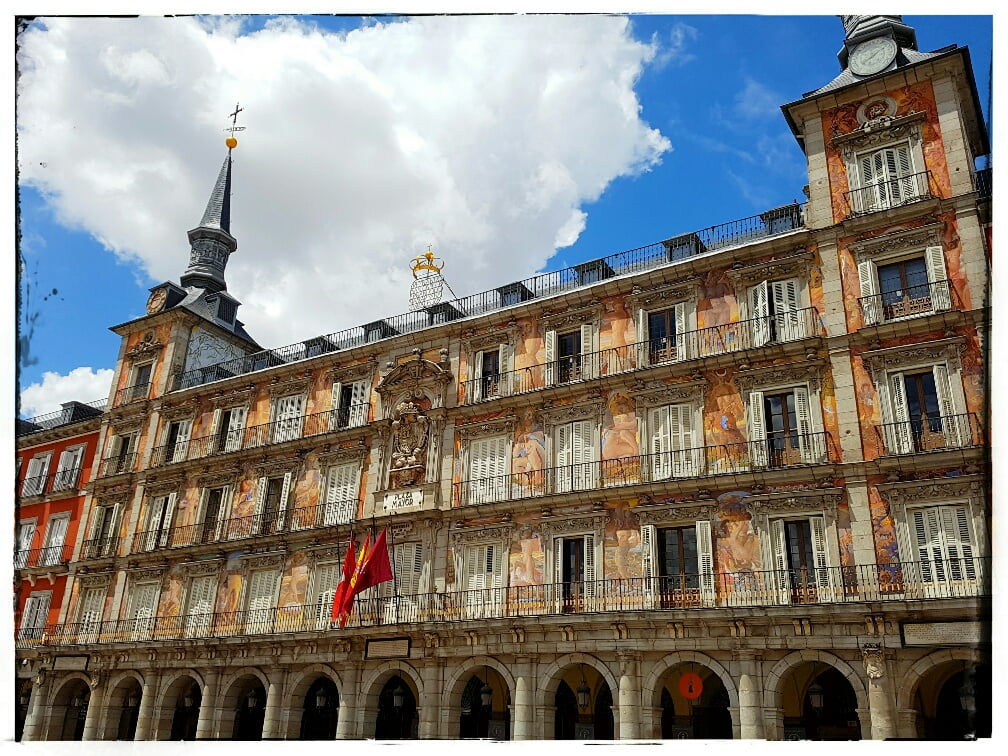 Mayor translating, roughly, to main square.  The building here, on the plaza, was the principal bakery for the city of Madrid in the 1700s, then became the central guild for all bakers, then in the 1800s became offices.  The original frescoes deteriorated to such a point that a competition was created to repaint the façade.  The current pictures, zodiac imagery, date to 1992.

From Plaza Mayor we followed some pedestrian boulevards back towards our hotel. 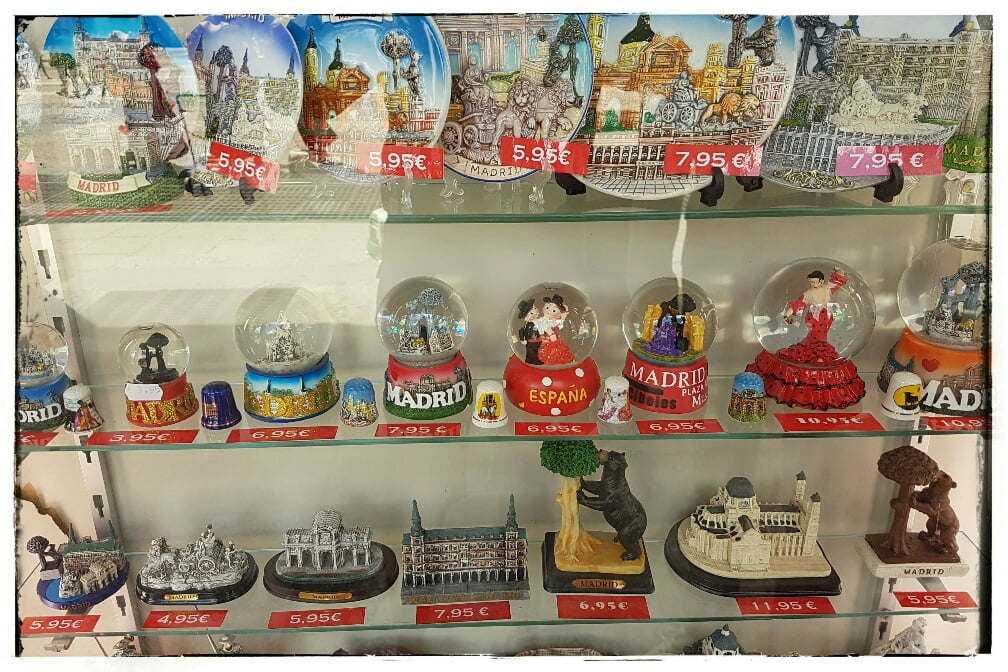 SS saw some spectacular snow globes—always on the lookout for his mum’s collection. 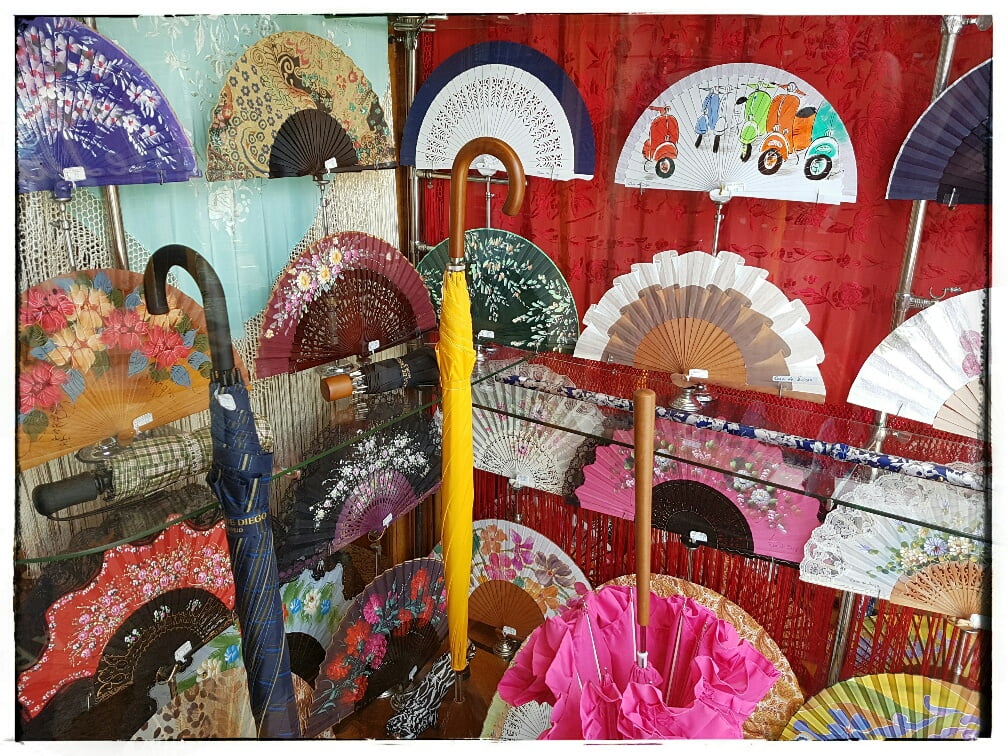 Alas, he was distracted by some beautiful fans.  Neither globes nor fans left the display windows. 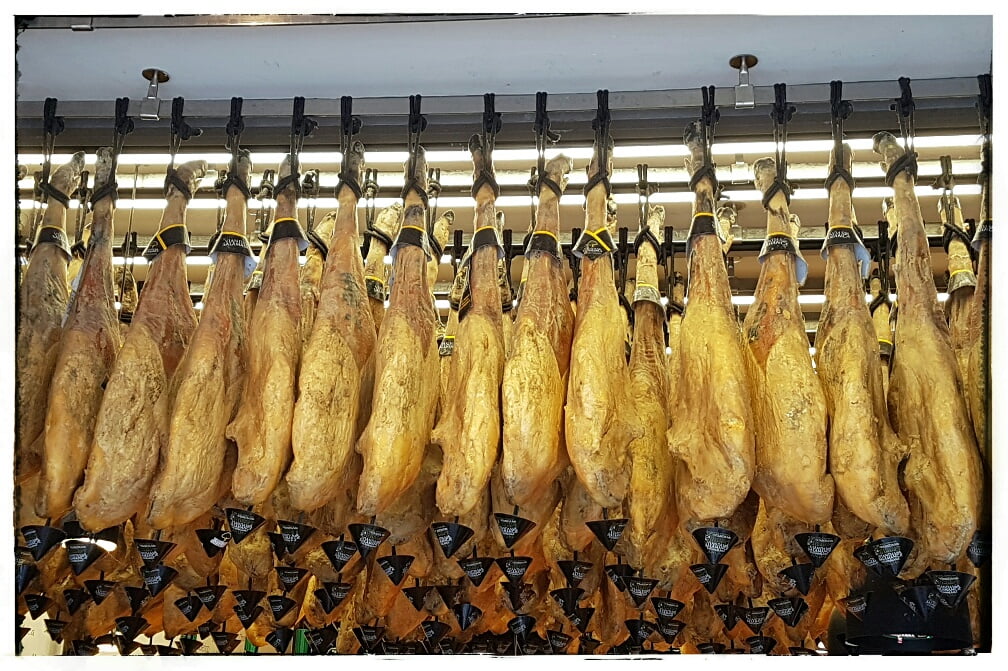 My mind was elsewhere: Iberico ham. 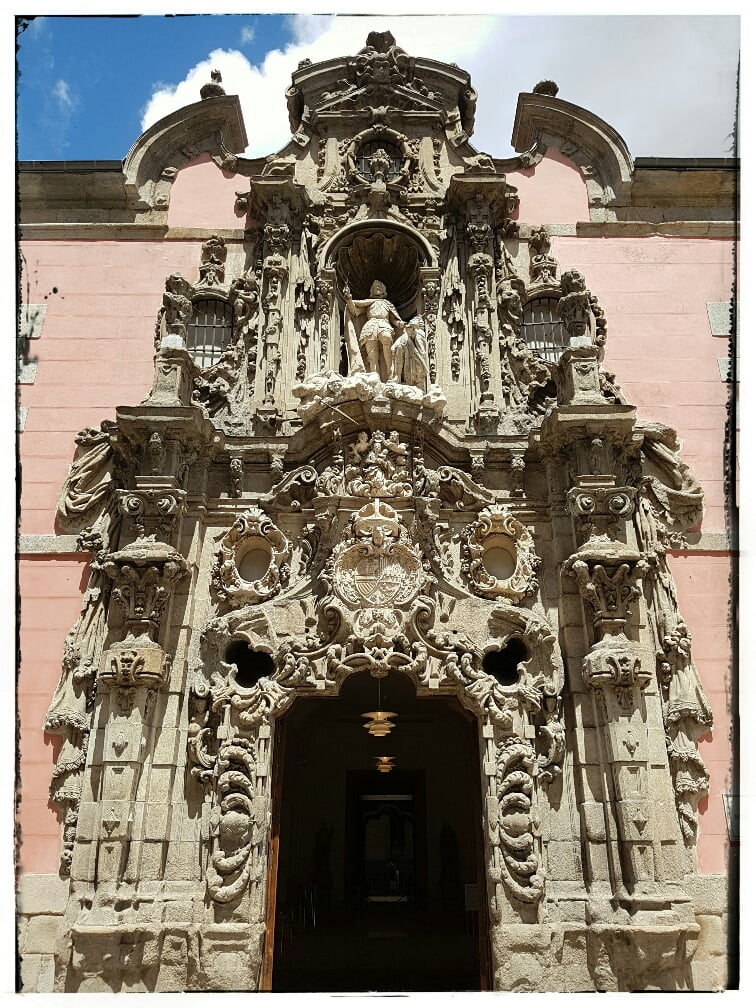 On our route back we passed by the Museum of the History of Madrid, which we didn’t have the energy to face despite the fact that it was a) free and b) has a superlative Goya, but we believe was originally a hospital then a municipal building and had, as you can see, a spectacular baroque entrance dating to 1721.

Back at the hotel we decided to use the spa.  For guests, for anyone not booking a “treatment” for 200 euros, you can access the exceptional steam room and an unusual pool. 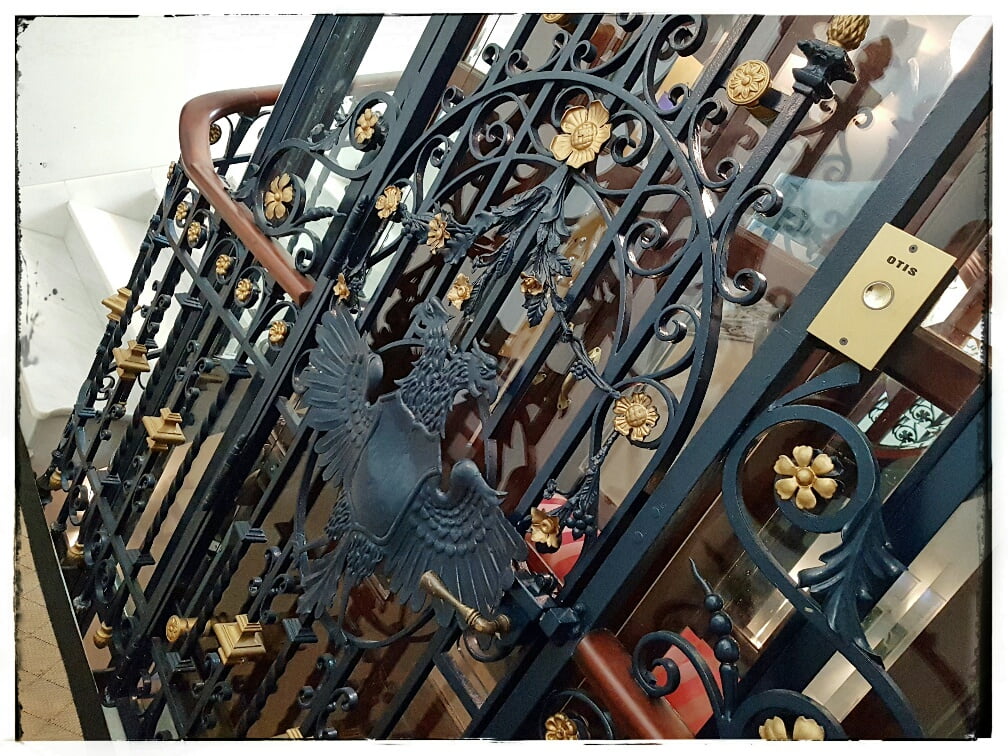 Step one, call the elevator. 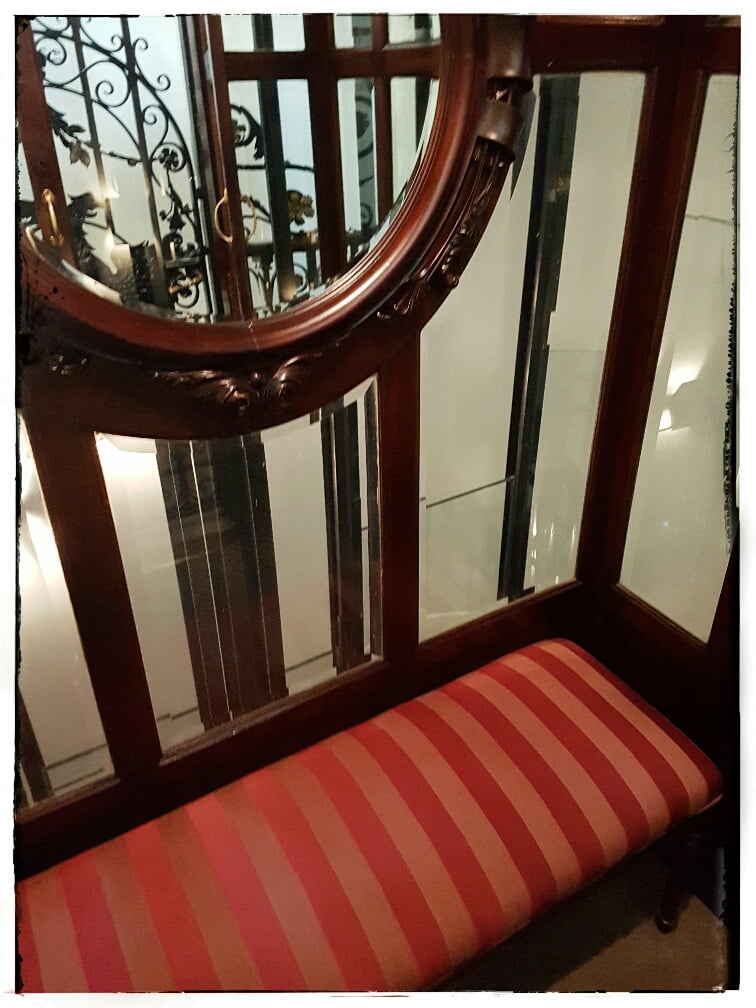 Step two, figure out how to get all three doors open and closed, then relax on the two-seater.

Step three, press “-1” not 0, which is the ground floor, not B as there is no basement.  What did Europeans do before adopting negative numbers? 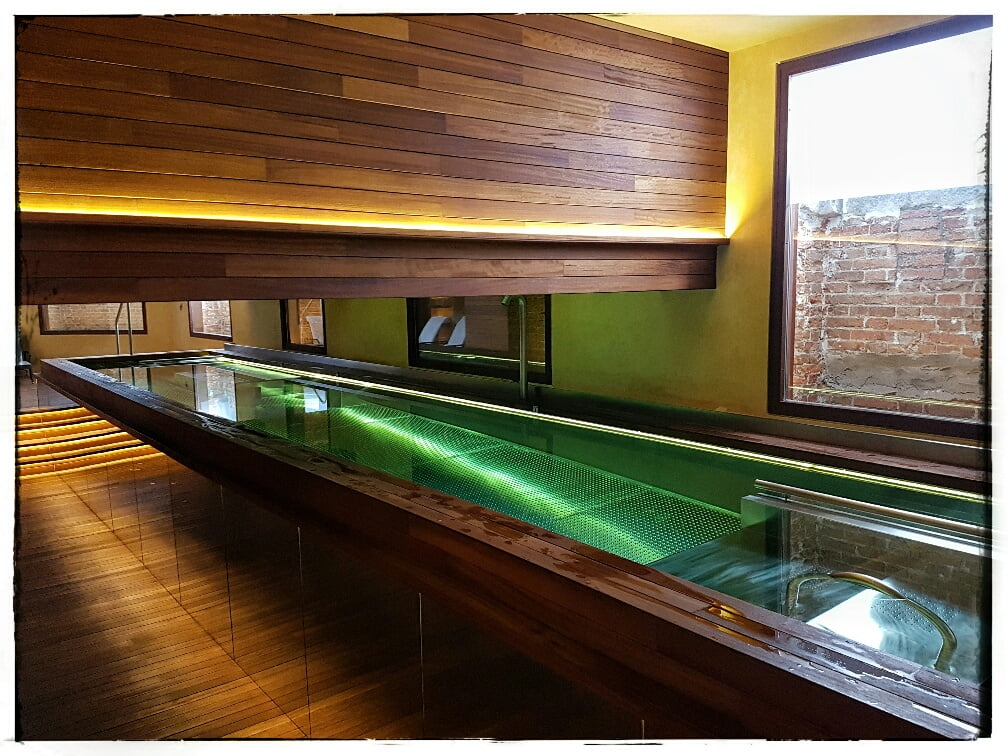 The pool, such as it is, while therapeutic, is really a glorified hot tub, with jets and molded beds at either end.  But it is incredibly relaxing (although the ceiling mirror belied the fact that I’ve totally gone off the so-called diet). 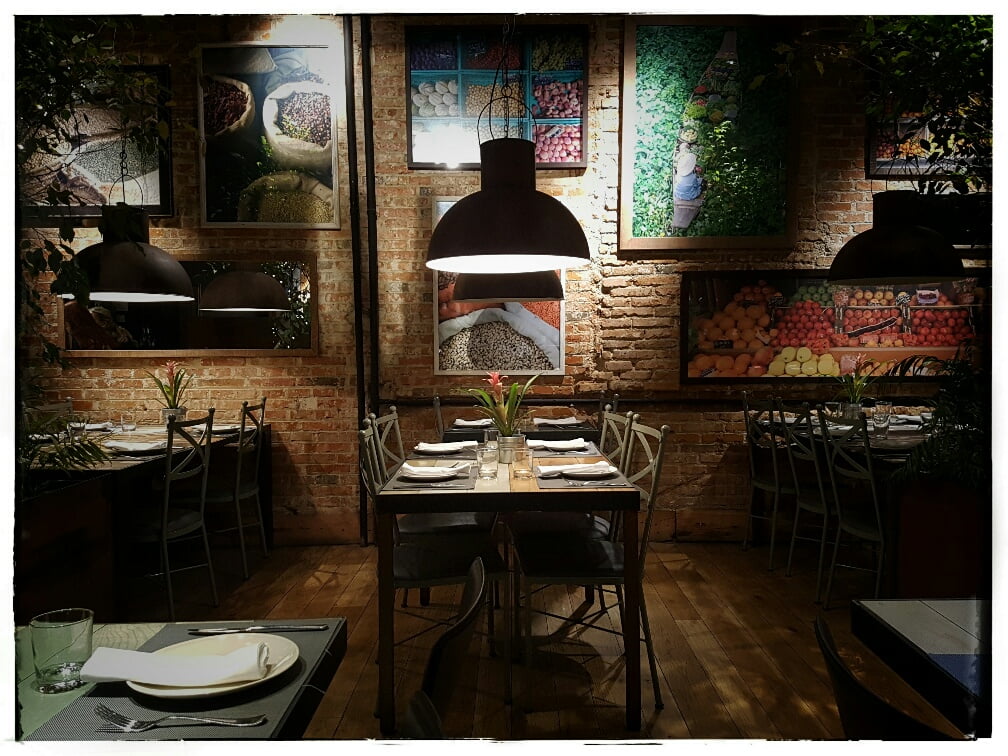 We went out to dinner to a Wallpaper recommended place called Lobby Market. 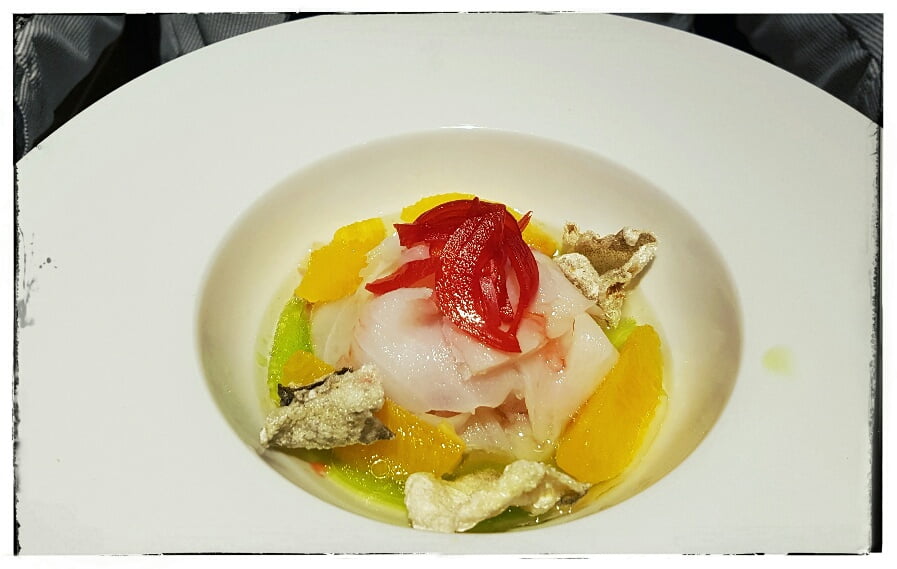 We shared a smoked burrata cheese with basil and tomato, ham croquettes, and two delicious mains.  SS had a cod crudo marinated in orange with orange segments and pickled spring onion and peppers and pork rind. 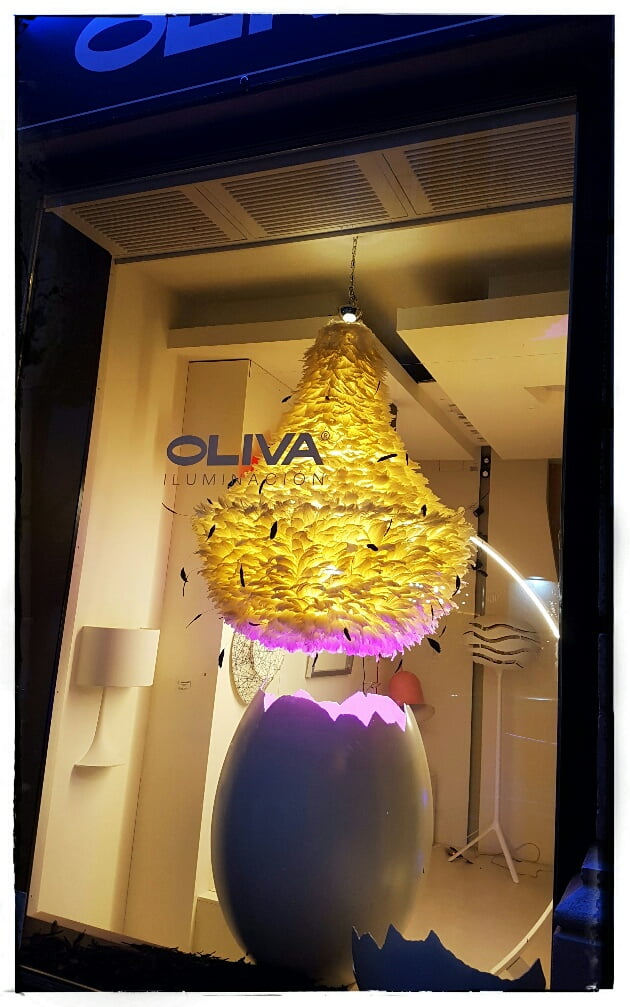 Despite the late hour, the city was very lively.  Who knows what this is. 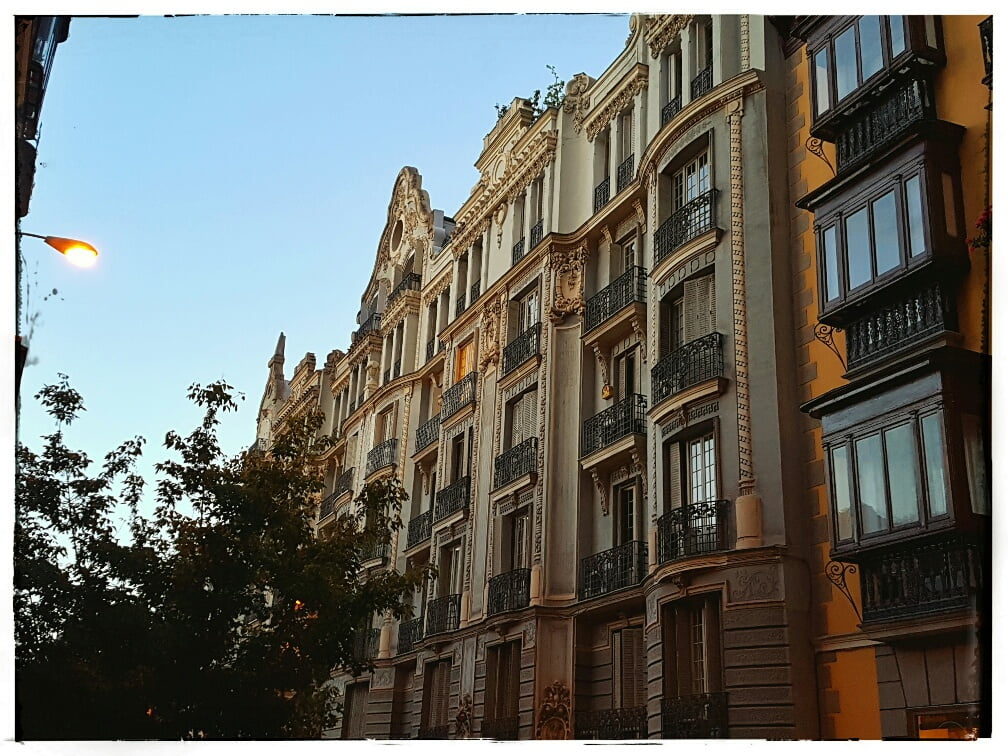 This shot was taken at 10 p.m.  Don’t you love the days approaching summer solstice?