We were standing on Bond Street across the street from the Opera Gallery where there was a giant sculpture of an ape, think King Kong not Gorillas in the Mist, ten feet tall six feet wide.  It was, excuse the pun, hugely engrossing.  We crossed to take a closer look.  Despite looking like solid steel, up close it was in fact 3,000 coat hangers!  David Mach, Turner award winner for those who keep track of such stuff. 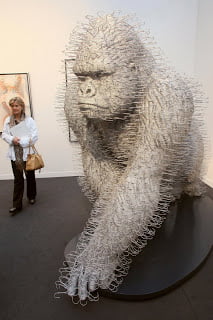 But that was later in the day.  SS let me sleep a little late and read the Sunday papers but by ten we were on the street.  Expecting grey, wet drizzle our plan was a matinee at the National and the Tate Modern.  But it wasn’t grey, it was a Sunday to write a blog about, a spectacular day, clear and sunny and warm with a light breeze, Palm Springs nice, too nice for theatre.

Cut through St. James and into Green Park, across to Hyde Park corner and into Knightsbridge, Harrods, Sloane St., King’s Road, then back through Belgravia, lousy with Lamborghinis, riddled with Aston Martins, Bentleys and V12 mercs, into Mayfair, where we looked in the windows of shops you need an appointment to view inside, up and down a dozen streets and lanes in Soho, through Liberty (in the elevators that are hand carved wood and fit about four people and are eerily precarious), and back to the hotel.  I think nearly seven hours on our feet with only two breaks.  SS calls that the gym.  Here’s the gym: 20 minutes cardio and a shower.

If I had a pound for each calorie burnt I might have shopped a little more arduously.  According to, I think, the New Yorker, the richest 400 Americans pay 16.6 per cent income tax.  No wonder they’re shopping in London…  So are the Russians of course.  And the Italians, Spanish and French are all here to offer service in the shops and restaurants.  To wit, they have dumbed down the famous warning on the Tube (“Mind the gap”) to “Mind the gap between the train and the platform.”  I could go on, but there was shopping to get on with, language barrier or no.

The Brits are, probably, in Andorra avoiding the tax.  There was a piece in the Observer today about a UK gent who won the Euro Millions.  He bagged £113.4 million.  That makes him richer than the remaining two Bee Gees but just slightly poorer than Earl Spencer.  (SS explained why sometimes it’s The Earl Blank and other times there’s no definite article but, trust me, the peerage is not terribly anecdotal.)  I was thinking of that nouveau riche man today as I viewed all sorts of pointless treasures.  My favourites included stainless steel collar stays (no one ever sees them, no one will know they’re not the plastic version that came with the shirt and you are sure to lose them in the laundry): £40.  A Marmite jar with a sterling silver lid: £72.  A Marmite jar with a sterling silver lid.  Hello.  Derek Rose pyjamas (I know, they’re just pyjamas, but they’re the best PJs on the planet): £139. 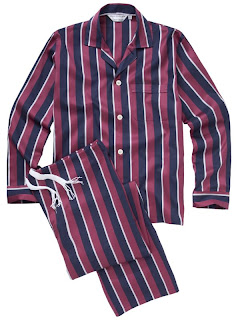 After we saw the gorilla we ran into a film shoot, walked right through it while the director was discussing a shot with the cinematographer, dozens of actors in 1940s period dress in heavy pancake.  For the film buff, that stretch of Bond Street is where, yes, Sean Connery originally said “Bond… James Bond.”  Makes sense now that you know…

There was no nap time.  And they call this a holiday!  Shower and out for dinner.  We wandered through Covent Garden and into Soho, finally adjusting to the crowds spilling out of bars and restaurants (smoking outside the open window of a cafe is still legal here).  We had about a pack and a half today, mainly Gauloise.  For dinner nothing fancy, just a basic French dinner at Cote, a half decent chain, with food not as good as Faux Bourgeois in YVR but in a pleasant setting.  Nice window seat and OK food but our waiter was ridiculously incompetent.  He forgot one of our starters.  The food for a table behind us came up before their drinks and it was wrong.  He got the wine wrong at another deuce.  The table beside us ordered dessert, apple tart and chocolate mousse, and a chocolate fondant came up.  Meanwhile SS ordered the fondant and I ordered verveine tea.  The waiter took the neighbour’s fondant into the bar, then brought it back to SS.  Then he never went and told the kitchen about the wrong order so they waited another ten minutes for the mousse to come out of the fridge which another waiter finally brought to the table.

Fun fact to close: The French call verveine elephant infusion.  The English call it verveine even though it’s technically lemon verbena.  One of its properties is to purportedly keep away vampires.  It will be easy sleeping tonight.