Did I ever give the update on the Tate Modern sunflower seeds?  Despite taking thousands of Chinese villagers years to create and paint, the porcelain wasn’t lacquered.  The seeds “opened” for one day.  When people began to walk on them porcelain dust filled the air and created a health hazard.  The exhibit was closed.  It’s gone back to being a pile of gravel… 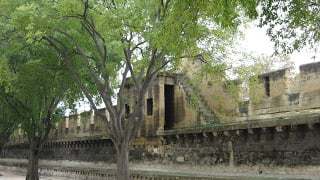 A day in Avignon.  Early arrival as the bells were ringing for mass.  It was overcast but very mild and pleasant.  We went to Le Palais des Papes first.  For those unfamiliar with Catholic history, the Pope left Rome amidst various wars and political upheavel (anti-papal gangs held sway in Rome) and he was advised, for his own safety, to take refuge elsewhere.  Long story, but he ended up in Avignon.  Then, as time went by, there ended up being two Popes, one in Rome and one in France, with various countries holding allegiance to either (and, finally, the Roman Pope winning out).  The Papal Palace is where, during the middle ages, several Popes made home.  When in the end Rome won out over Avignon, the palace fell into disrepair.  It was scheduled for dismantlement after the revolution as a make-work project but that didn’t occur.  It was however much vandalized and looted.  Then, for a few hundred years, it was an army barracks. 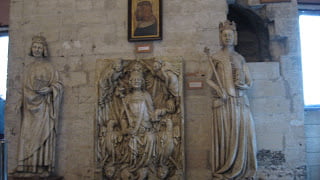 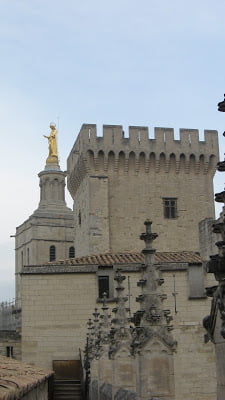 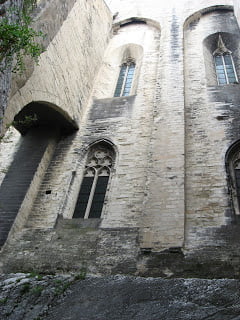 After spending almost two very interesting hours in the palace we went down to the very famous bridge.  Fun fact: People actually danced under the bridge, not on it.  The bridge spanned an island in the centre of the Rhone which was a relaxation and picnic destination–they danced “sous” la pont not sur la pont–the bridge was too narrow for dancing. 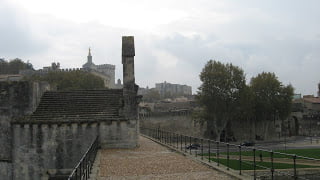 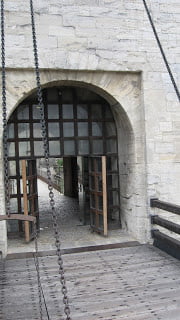 From the remains of the pont we climbed up into the gardens which lay beyond the cathedral, then down into the medieval city and did some interesting walks which led us into a dodgy neighbourhood with some very old water wheels. 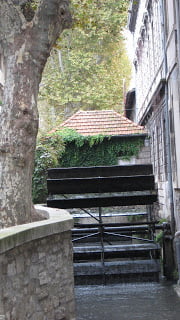 We were getting touristed out, it had been a beautiful day, when drizzle came on around 3:30 so that was the end of Provence for us; it has been a phenomenal visit, a must return.

For dinner we drove SE to a small town called Fontvielle for a sensible and satisfying supper that I don’t need to itemize a la la grande bouffe except to say that by nine at night it was a full on thunderstorm and driving on the highway, even with the high beams and wipers on max, visibility was at a maximum minimum.  Tomorrow Paris.