I neglected to write about our ferry trip yesterday (vis-à-vis BCF).  There was one ferry employee at the island on departure (it’s a pay on the mainland free return like Salt Spring Crofton).  There was one deckhand directing traffic on the ferry; the captain helped (the captain helped load traffic!).  The captain ran into a foot passenger who was an old friend so they went up to the helm together.  We were first in line so could see it all and, as they roped open the door to the steering room for a breeze virtually anyone could have walked in and piloted the ship by force.  They chatted the whole way, which was amusing that sixty cars and minibuses were put at risk while the captain did “two things” at once…  When we arrived the one deckhand put down the ramp on his own, no terminal staff, he even walked down the ramp and opened the gate.  The foot passengers were not clear when we drove off.  And the amazing thing about it all was that they do that every half hour every day and no one gets run over, drowns or is maimed.  Plus they ran on time.

This morning was another beautiful day.  Freakishly perfect in fact with not even a whisper of cloud cover.  The bay (which is essentially the River Derwent basin) was like glass.  It eventually reached 25, so our hottest day in Tassie too.  We decided to stay in town.  The island looks small and everything looks close but in fact as with all things Australian distance is often deceiving and I was ready for a day on legs not a bucket seat. 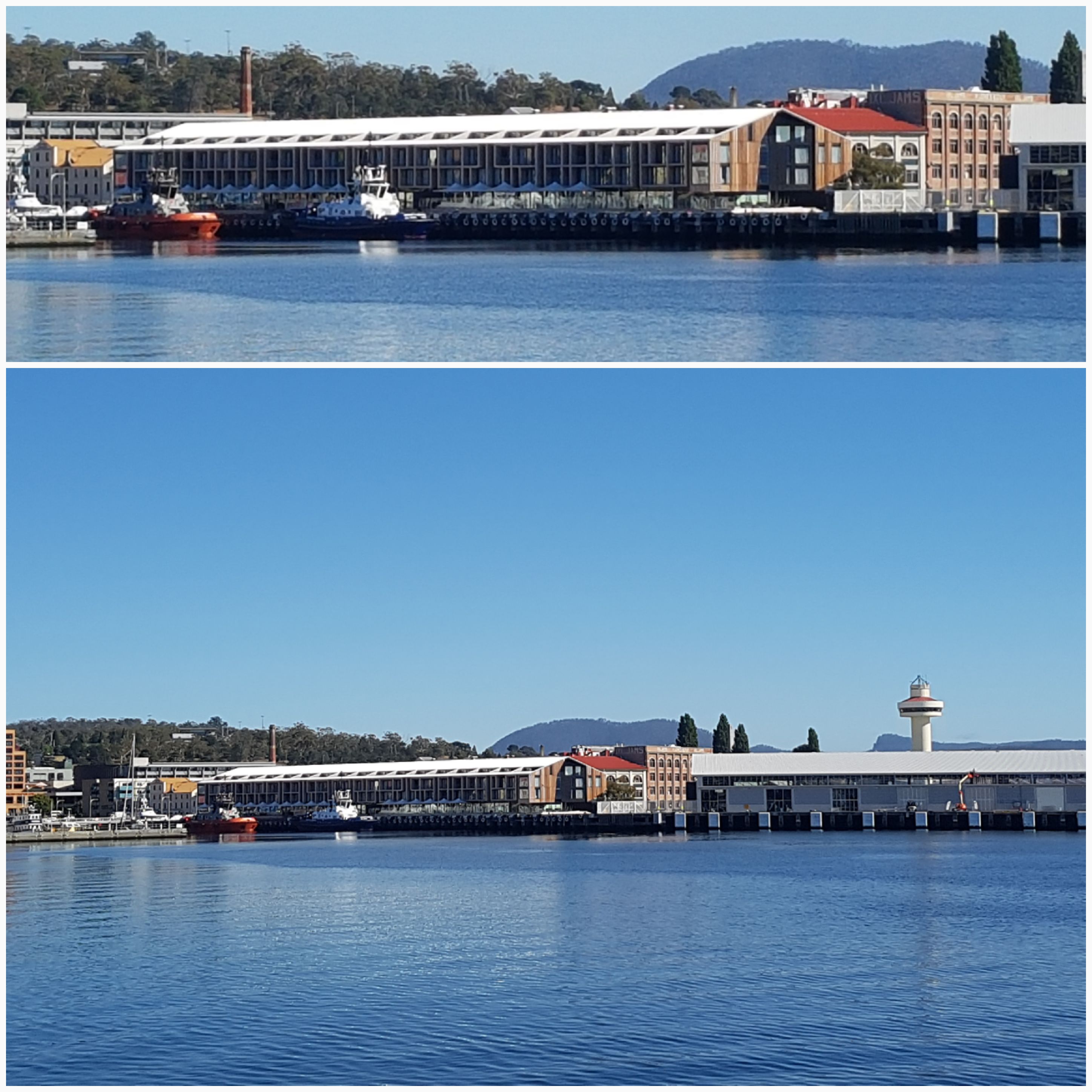 The top shot shows our hotel and working pier taken from the southwest.  The pic below it if you can squint and see my crappy picture, is of an historical photo of the same wharf about 100 years ago. 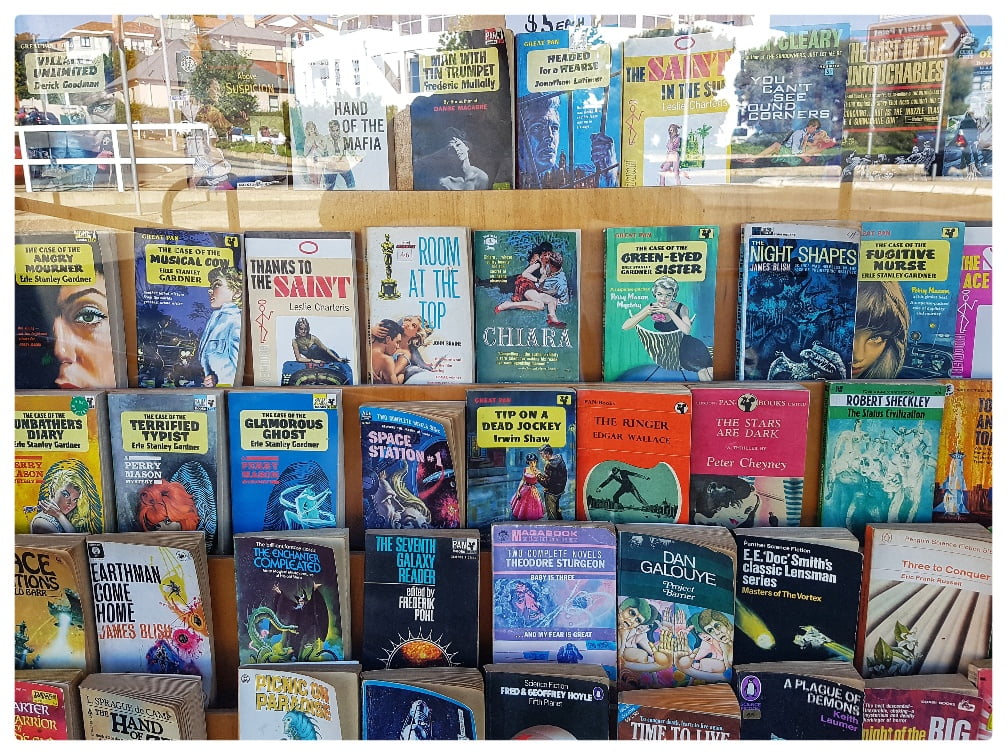 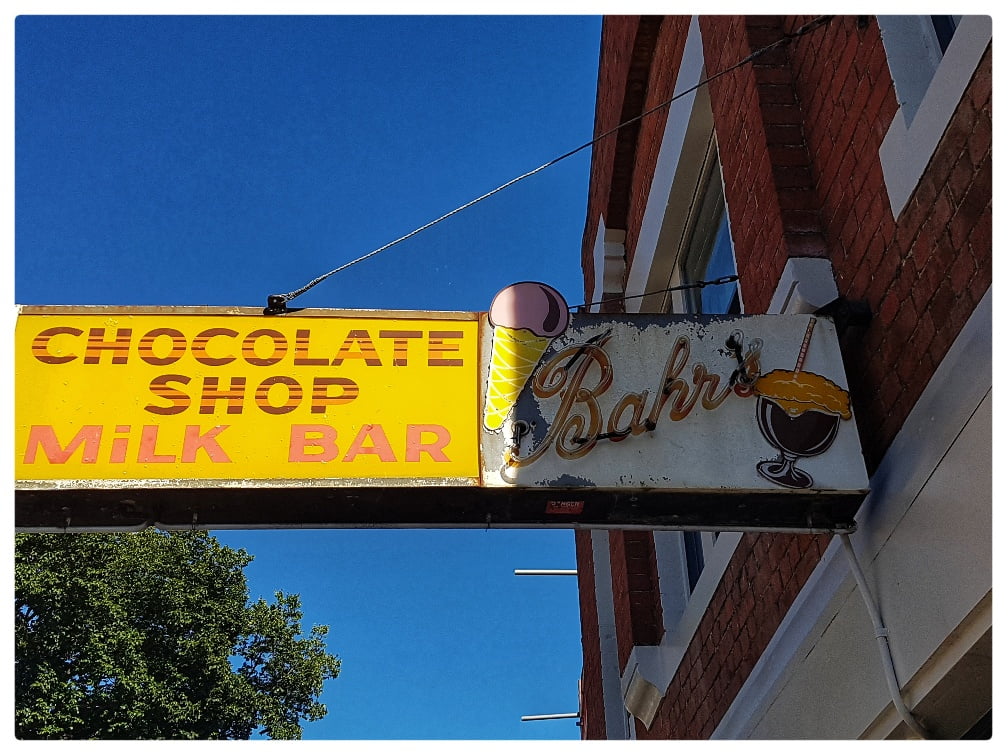 We spent the morning wandering the Salamanca/Battery Point neck of the woods which initially served as a fortress against, e.g., French and American whaling ships, then became a rather tony enclave of homes, and is now a mostly gentrified inner city hood with quaint shops and colonial era inns. 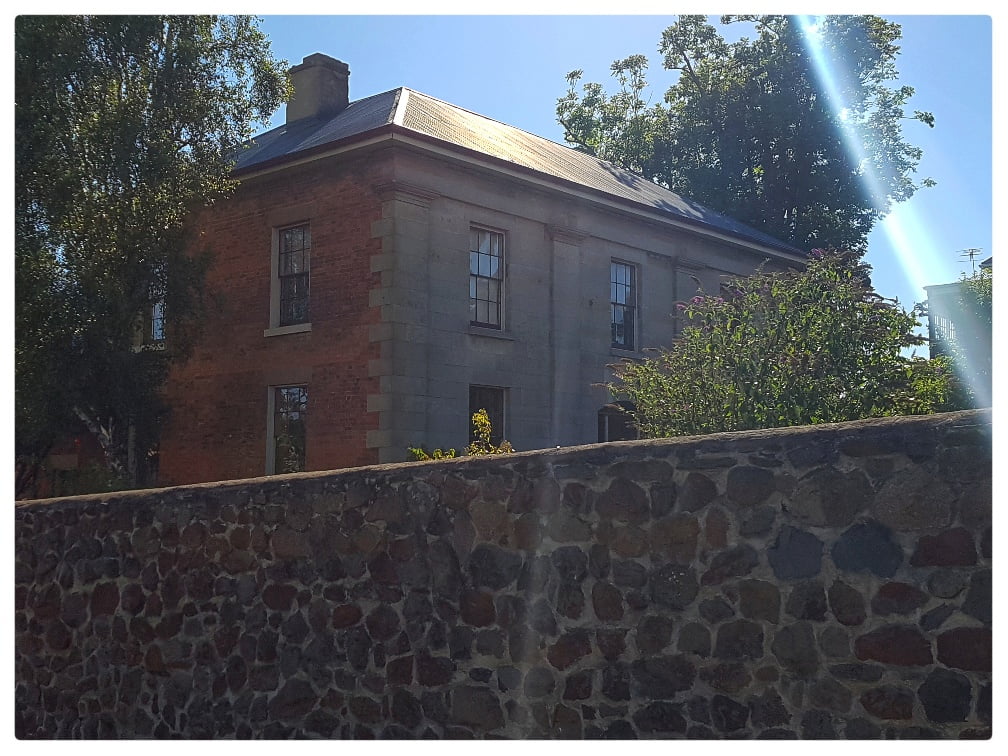 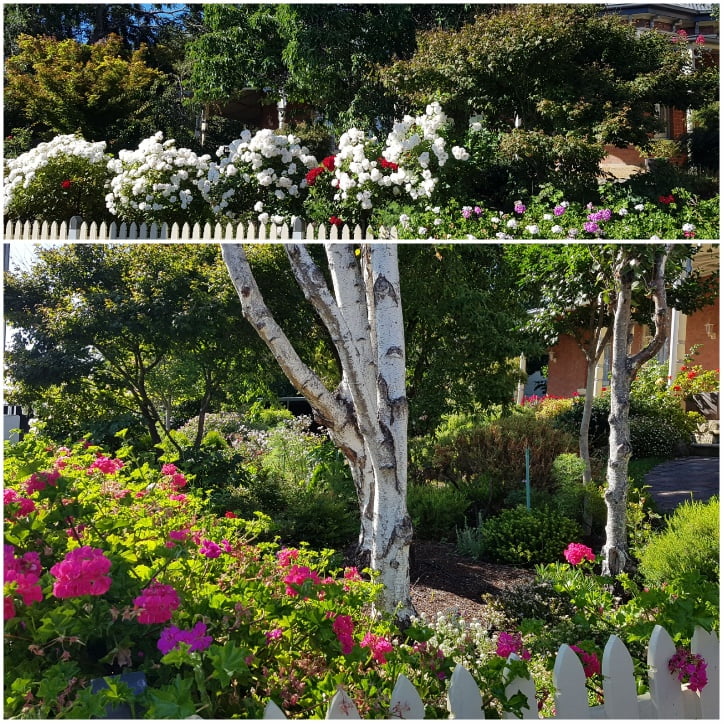 SS commented that if you were to remove a few bits of flora (and the ad hoc remnant of wallaby poop) you pretty much have a British village. 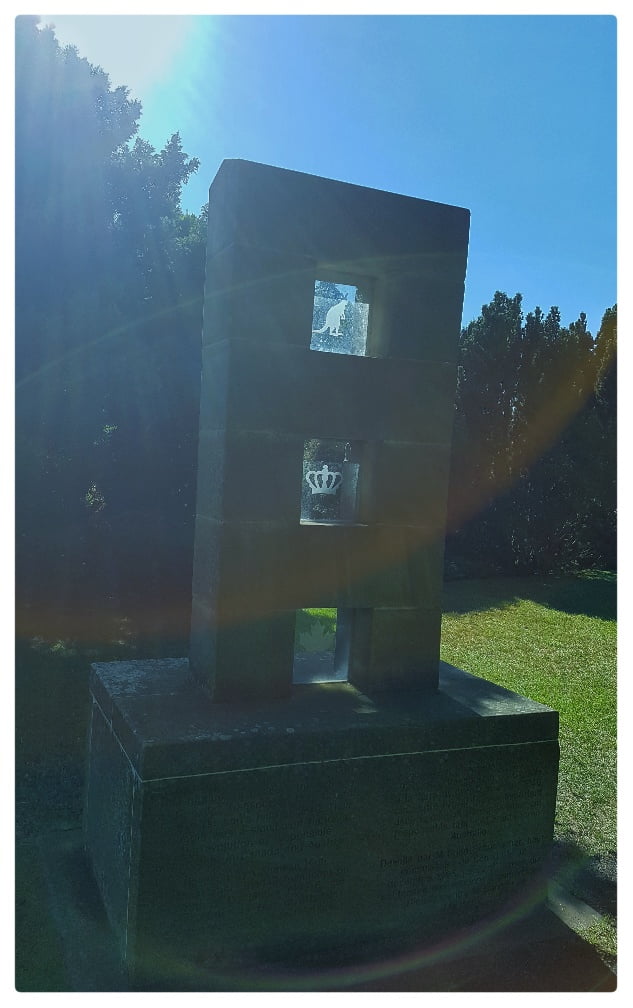 Did you know that in 1837-8 in Canada (in what is now Ontario) there were political rebellions which led to “radicals” being sentenced to death and over 90 political prisoners being sent to (what is now) Tasmania?  I thought all the convicts came from the UK.  Not so.  This very crappy picture (the worst pictures are taken on the most beautiful days) is one of a couple Hobart memorials to the Canadians.

I spent some time at the local museum, where SS had dropped in a few days ago, to see their Tasmanian Devil exhibit.  Not a canine, not a feline, a marsupial of course.  Much maligned and misunderstood (I, for one, grew up on Tas, the ludicrous Loony Toons concept animal), and considered a vile predator by many early settlers and farmers. 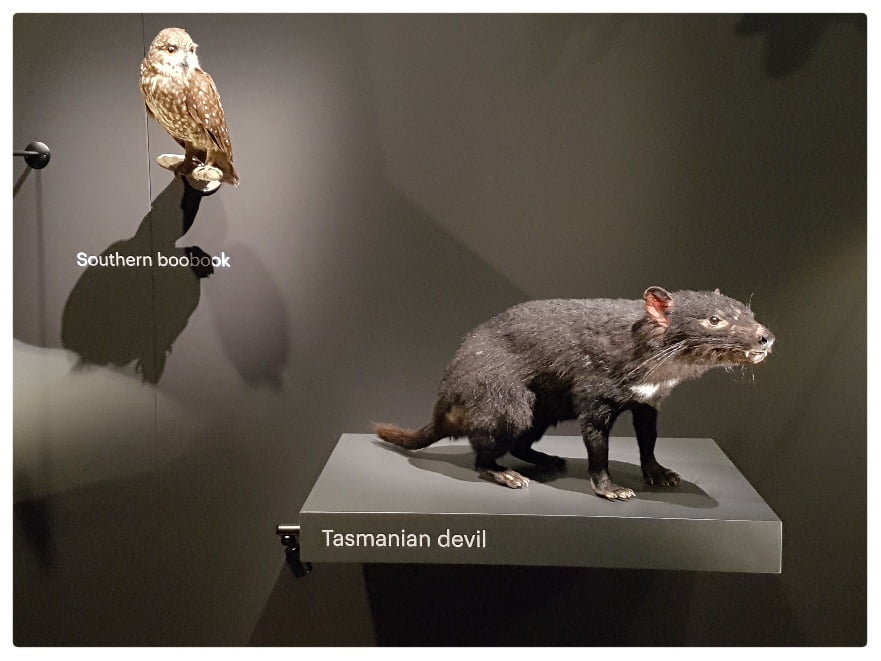 The TD is in fact a social carnivore, particularly useful in an eco system where they can live off dead prey and the weakest of the flock; nowadays a farmer is more likely to leave a maimed (dead) animal out in the field for the TDs to feast on then set a trap to eradicate the lot.  Their bared teeth actually indicate a stress yawn and their feverish tiger like growls are in fact not aggressive but in satisfaction, say eating a fresh kill. 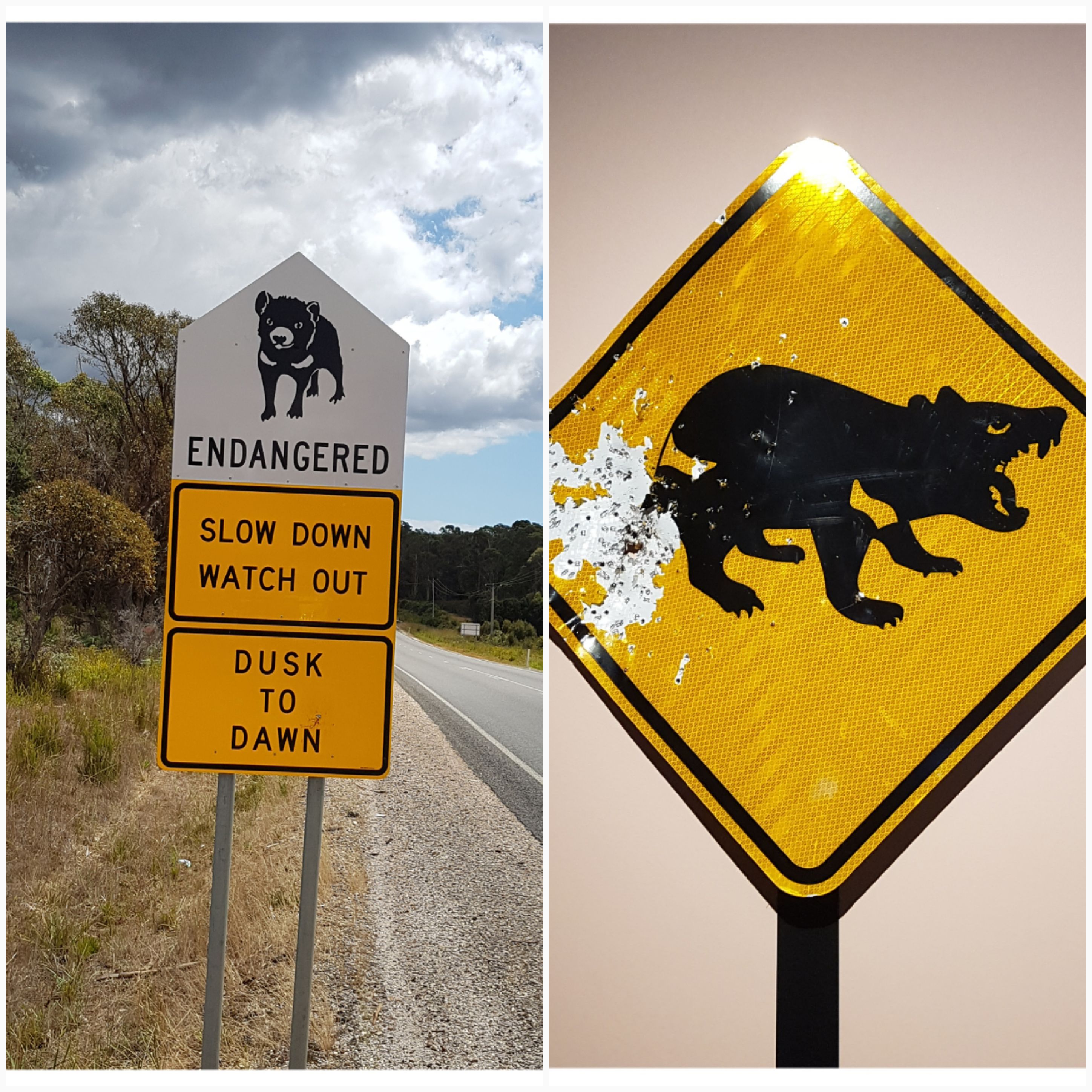 I’ve reposted a sign I took a pic of and posted last week with the “historical” devil sign.  Amazing the difference.  Until 2010 the TD signs portrayed the animals as vicious and a menace; it was common to take potshots at the signs.  Once they revised the signs to make the animals look social and acceptable attitudes changed overnight.

We took a late breakfast on the harbour then a cab to the Cascade brewery.  I didn’t even know Cascade existed until the time we took the train Sydney to Perth and it was served in the bar car.  But it is in fact Australia’s second oldest continually operating business (a bank, of course, is the oldest).

The enterprise began in the 1800s by an English settler who convinced the local government to cede him 2,000 acres above Hobart where a stream ran through a valley; the plan was to open a logging mill, use the water to provide energy, and the local forest as fodder for his enterprise.  While he did in fact open a logging mill, the used water flowing from it, followed by the contributions from a tannery further downstream, led to some fetid results and a lack of clean water for Hobart residents.  Instead, he transitioned his mill to a brewery and, I guess, the result is history. 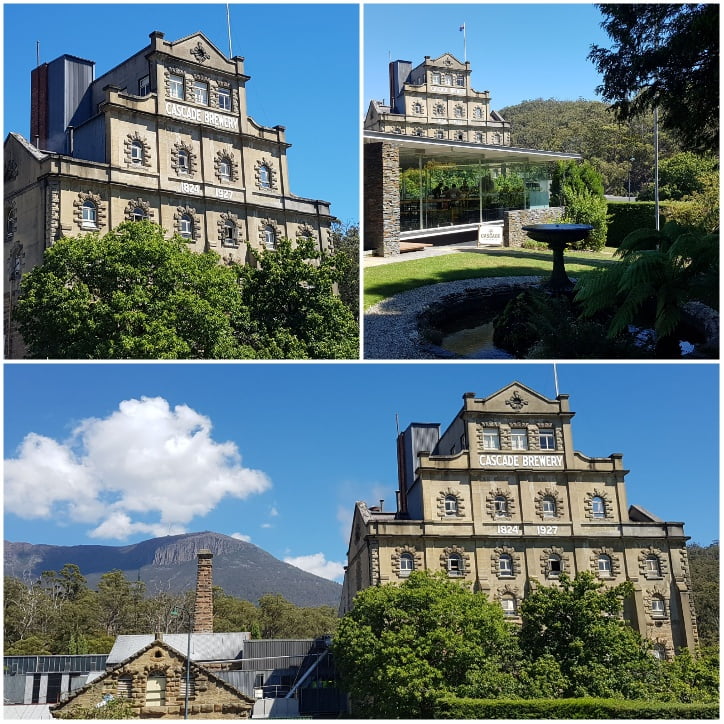 The building looks like the front to a sanitarium in a gothic novel.  It is an architectural hodge podge.  The first few floors were built by convicts from sandstone quarries, made into local brick, and cobbled together in piecemeal fashion.  When the mill converted to brewing and needed more space for vats, they added on floors with another type of brick.  Then, over time, the back of the brewery was expanded and modified to accommodate modernization.  It really is like a film lot, with an historical front and bits and bobs out back. 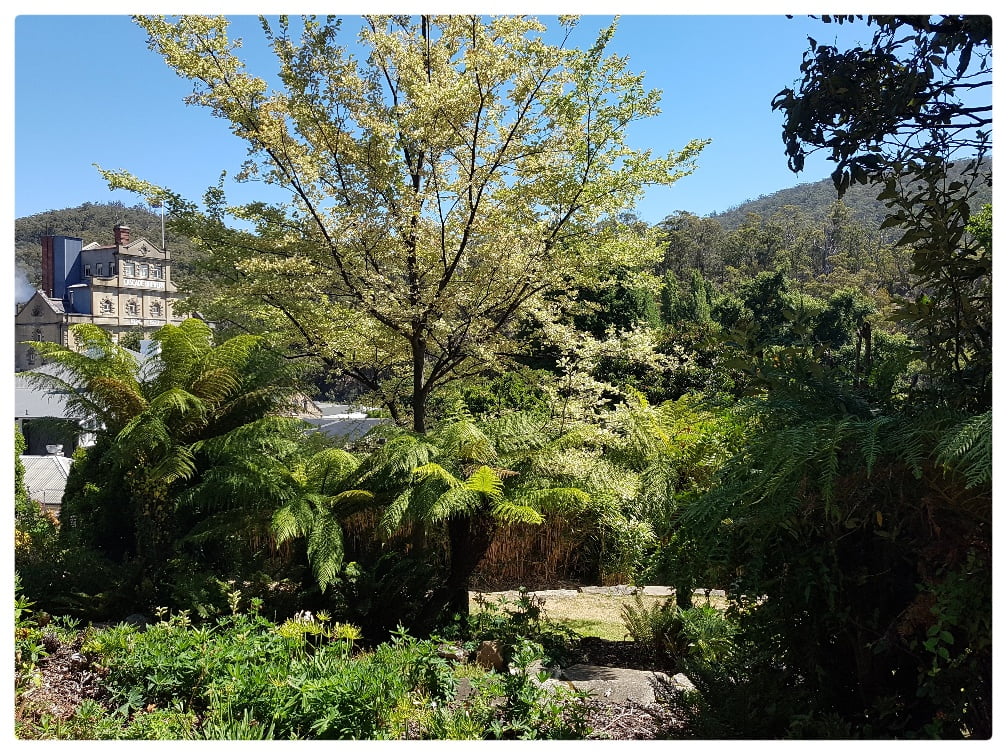 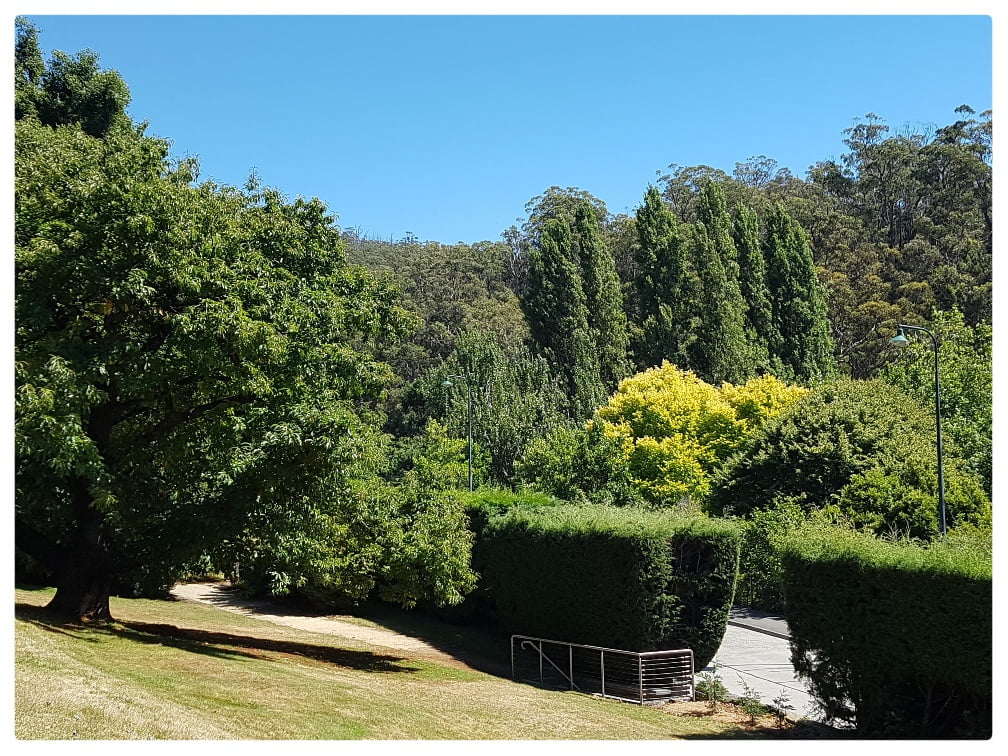 Spanish chestnut, poplar, cedar, fir, oak, cherry, eucalyptus.  What country am I in? 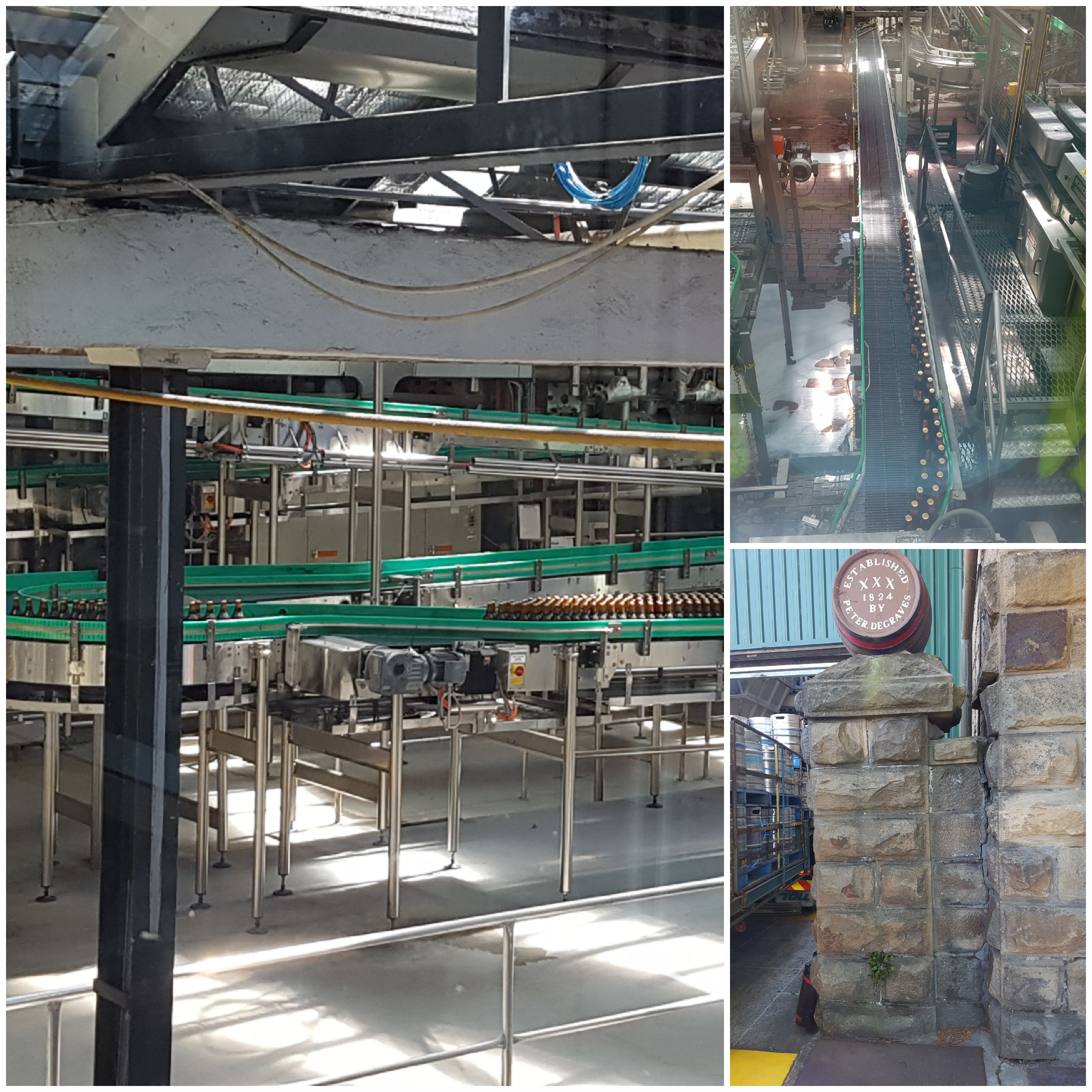 The tour was fine, more anecdotes than information, and of course afterwards there was free drinks in their really lovely beer garden, literally a garden with beer, not simply picnic tables on paving stones.  Cascade beer fun fact: The only brewery in Australia using mountain water; all the rest are on mains.  In the collage above two pics are the bottling plant; the lower right is the original entrance crafted from sandstone by convicts.  In order to keep the horse drawn carriages then, and lorries now, from eroding the gate pillars, you’ll see a small piece of black steel as a guide.  There are two actually, one on both side, both cannons from war ships that ended up in the scrap heap in the 1820s, still remaining today as guideposts. 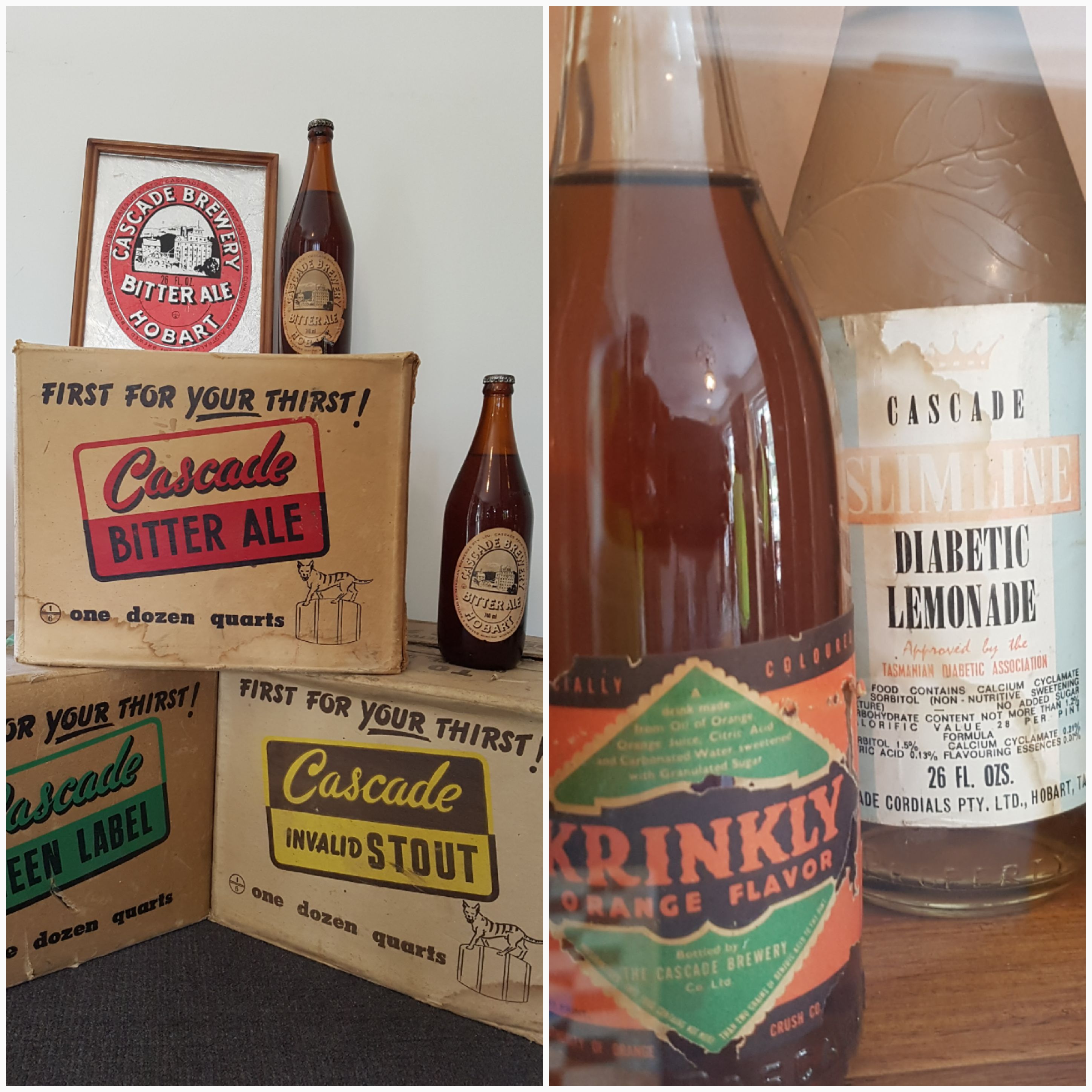 Invalid stout: loaded up with iron for the expectant mum! The one historical factoid that is really worth repeating is the brewery tradition of providing workers with free beer.  The bell rang five times a day: start of workday, morning tea, lunch, afternoon tea, end of day.  Each break workers were given the opportunity for free beer.  Grab a mug and drink away, then return to work.  That old custom remained in place for many years.  Until when?  The turn of the 20th century?  WWI?  Maybe American prohibition or WWII or the 1950s perhaps when the infamous Aussie “six o’clock swill” was repealed through longer bar hours?  No.  It remained in place until 1993 when Carlton bought the family enterprise and corporate poohbahs couldn’t believe the tradition of drinking on the job.  (But they still give workers free beer on payday and, get this: every Friday at quitting time employees can drink draft at the tasting room for two full hours on the company’s dime.)  As SS put it, there is a Newfoundland streak in the Tassies; self-deprecating but also staunchly independent and not prone to radical change. 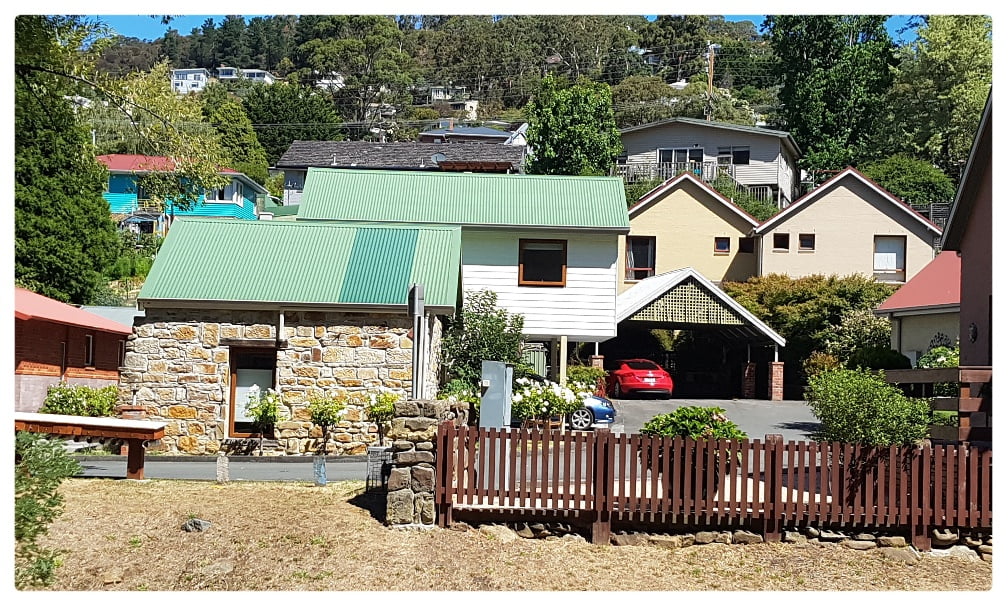 We walked back to the centre on a public path which followed the “rivulet” that passes through the brewery.  You pass the “female factory” which is a UNESCO site where female convicts were conscripted to a workhouse.  Then you wend your way back into the CBD. Some of the local architecture along the rivulet, as per the pic above, is interesting if quirky.

We spent some time in the marina area before returning to the hotel and taking dinner in the hotel restaurant, which looks out from the wharf across the bay. 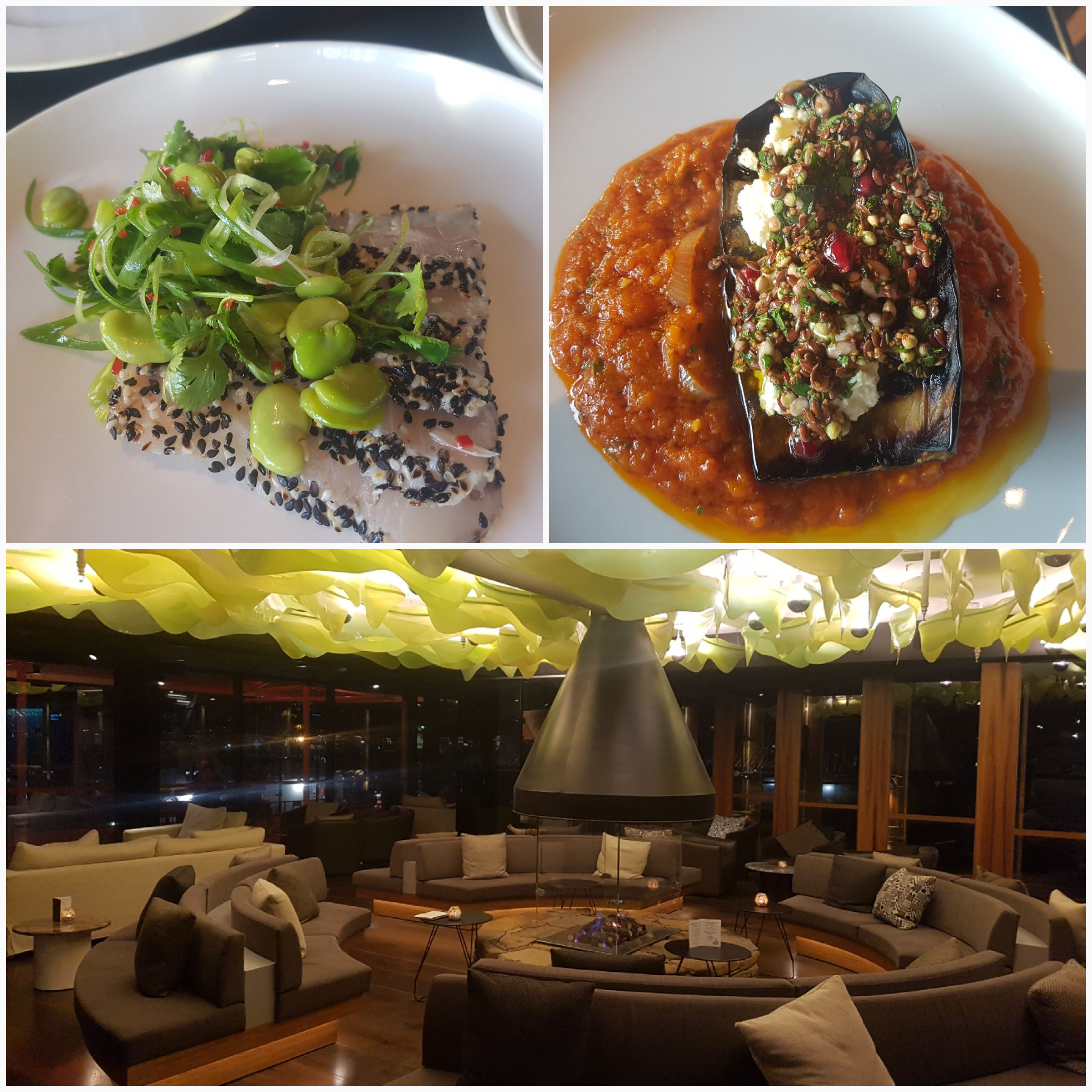 For dinner we just went downstairs to the hotel’s “Wharf” restaurant.  The collage shows their lounge, some seared kingfish and a delectable eggplant main.  It was modern Australian and very good but not necessarily as refined as some of the outposts we’d made an effort to book over the last week.  The deuce beside us were two older bejewelled dames, one wealthy ex-pat from Hobart who has spent the last 40 years living in Palm Beach, Florida, and regaled me with tales of famous colleagues and fine hotels and investments gone awry; her Cartier jewelry was only mildly distracting but her nail polish told another story altogether.  SS did his best to talk to her childhood friend Jean, well pearled from a successful career in real estate and only modestly compromised by two hearing aids and a walker.  There was, I think fortunately, no expectation for a waltz.  We made our excuses shortly after nine.