We were up
very early for our morning flight to Santiago.
Although akin to flying Vancouver to Calgary, it`s an international
flight and they are apparently strict on check-in; not strict on fluids, of
which it was easy to pass through with, or ID, which they only checked once,
just particular on early check-in….
Our cab picked us up at 6:15.  You
would think at that hour the city would be just waking up.  In Palermo, it was just shutting down.  Clubs go to, apparently, 5:30, and there were
kids teeming through the neighbourhood, piling two, three, four to a tiny cab.  Club kids on the street, on the sidewalk,
everywhere.  It was a madhouse.  Once we cleared Palermo, and the throngs, the
cab decided to avoid one of the two tolls en route.  Since it´s a flat rate I guess it was his
prerogative, but let me tell you: The detour he took, the side streets, dingy
poorly lit avenues and questionable turns, were a little unnerving.  But check-in went smoothly, we hit the LAN
lounge, which was beautifully designed with Macs and docking stations and both had
a Nespresso.
I had tried
for months to get this flight on points, in economy, and failing that had one
day on a whim tried business, and scored.
So we were taking a two hour flight up front.  It seemed like a bit of a waste but I was
hungry for the breakfast and, being especially bumpy over the Andes, grateful
for the lie flat bed.  I watched the
Modern Family where Mitch builds himself into Lily`s princess castle and can`t
get out while Phil outfits the old stations wagon for a family picnic at which
the car goes down a cliff (best line is when Claire gets angry, then
apologizes, and Phil says lovingly “Don´t apologize, I love it when you`re
human.”)  In Santiago, for the privilege
of entering the country, Canadians pay $132.
Americans pay $160.  Mexicans pay
$15.  Albanians also pay.  Go figure.
We paid.
By speaking
English loudly and pretending to understand Spanish we picked up our rental
car.  I had reserved a VW Golf and got a
Mazda 2—and you know how we both feel about Mazda!  Anyway, despite the language barrier, which
is huge in Chile, and the “driving” we successfully navigated our way to Vina
del Mar.  We have four nights on points
at the Sheraton, which sits out on a promontory, a half circle, with rooms
having expansive harbour views which arc around the bay. 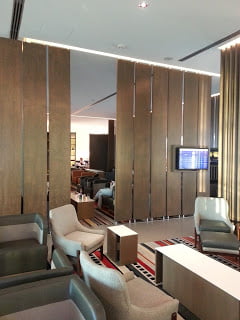 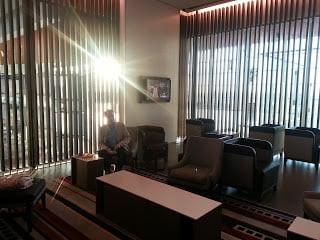 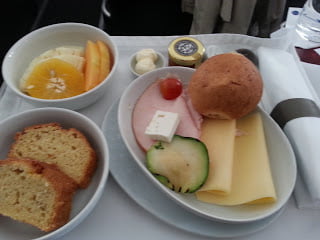 Valparaiso
and Vina del Mar are sister towns on the Pacific, NW of Santiago, sitting on a
huge harbour which at night in twinkling lights resembles Vancouver in many
ways.  I knew that Valparaiso, a very old
port town, and current seat of government, was going to be large and with an
industrial feel.  That was correct.  But I thought Vina del Mar would be its
smaller sister, sort of like Fort Langley is to Langley, and it´s not.  It´s big.
Sure, it has the feel of a resort town, but the relationship is more
like New York boroughs than Monterey and Carmen.
The pics below are the view from our terrace, left is Valparaiso, right towards Vina del Mar (which you can´t see!) 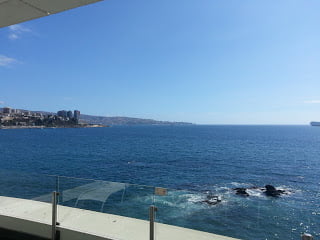 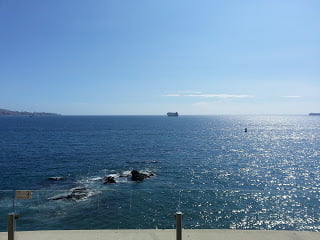 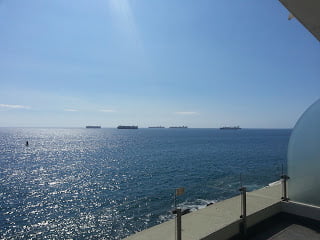 We were
exhausted after our travel day, but still took an hour walk into town.  Being Easter Sunday there were a lot of
families and holiday stuff including giant sand castles and pony rides.  Back at the hotel I took a sauna (they have a
great spa here, dry sauna, steam room, whirlpool, gym, indoor pool, outdoor
pool), so I made use of the facilities and then we had a decent dinner in the
hotel with a view across the harbor to both towns. 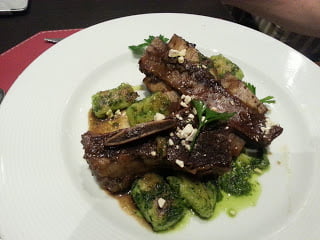 We both
needed to sleep but Game of Thrones was premiering on HBO so SS stayed up but I
crashed.