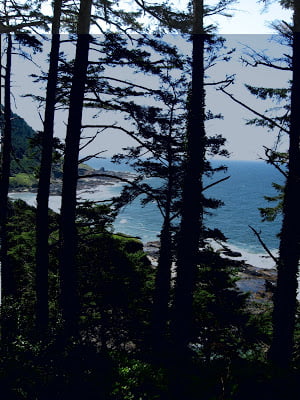 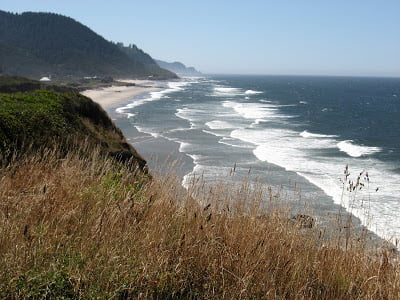 But magnificent scenery, all the way.  The start started out with archetypal Northwest treelines into a rocky shoreline, transitioned midday into the dunes famous along the coast here—some spilling for kilometres from sea inland, toppling through the brush onto roadways—then becoming open, spare, Mediterranean, a craggy shoreline and horizontal windswept evergreens.  But it was a long drive to tackle in a single go.
Gold Beach sits where the Rogue River funnels into the Pacific.  We arrived just past four, checked in, then took a walk along the beach.  It was warm, blindingly clear sky, but windy, then to a small bistro off the main drag called Anna’s.  There was a chef and a server.  It could top out at 20 covers, tops, but there were only about 12 of us Tuesday; still, it was full tilt and although our service was excellent some diners waited a half hour for simple mains.  SS had a homemade tomato soup with dill, I had a salad all crunch (red peppers, celery, snap peas, cucumber, and a little avocado, but no lettuce) then we both had ling cod with caramelized onions, succotash and potato popovers.  Nice.
The Long Day Closes: My favourite “boring” movie.  Which is, I guess, a pretty broad category.  Does Joseph Losey’s Boom! go in the boring or unusual category?  I don’t consider Resnais or Bresson boring, probably a debatable point.  Another consideration: How many people will you meet in your life who have seen a Terrence Davies movie?  And liked it?  25?  30?  Check out the Wikipedia entry; it reads like an algorithm, which is particularly perverse given how much compassion went into the film.  I guess boring has now become so common, I mean how many “Saws” will hold your attention? that we should have an “authentically boring” category as well.