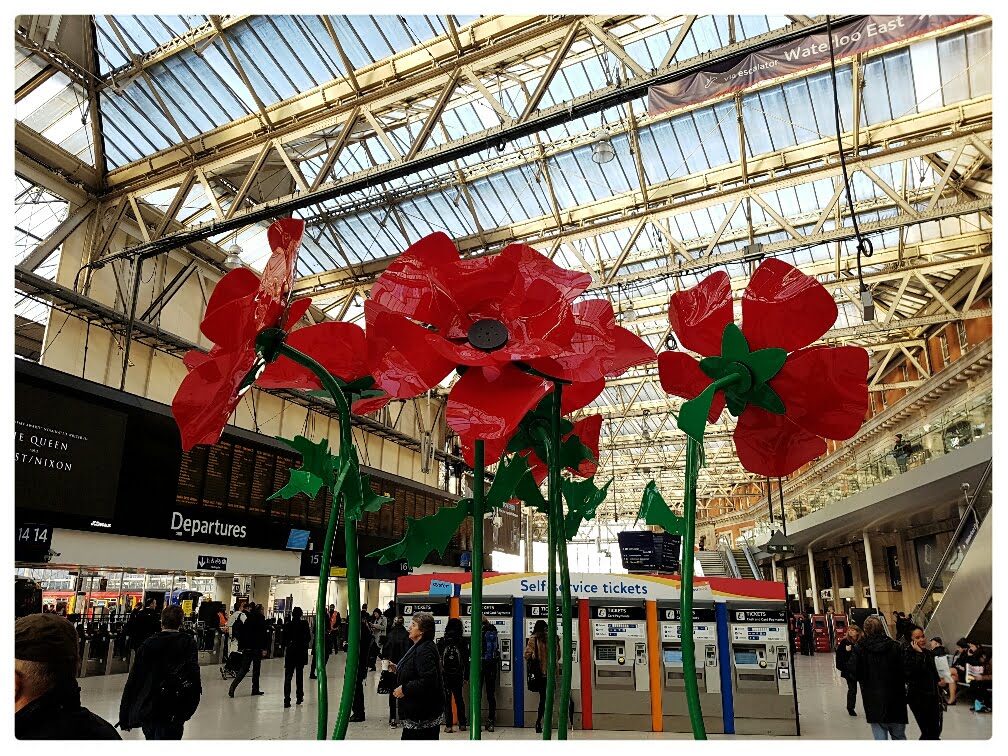 Remembrance Day: Friday was set to be glorious.  I dragged my sorry jetlagged ass out of bed and did something I’ve never done in London: Took the train to Hampton Court, then walked the Thames Path to Richmond.  I was under the impression this would be a seven and a half kilometre walk, a breeze.  I forgot, like pound sterling, the UK never fully adopted all the European “fashions”: The speed you travel here and the distance you travel? Miles.  So three miles in I discovered it would be a little longer than anticipated. 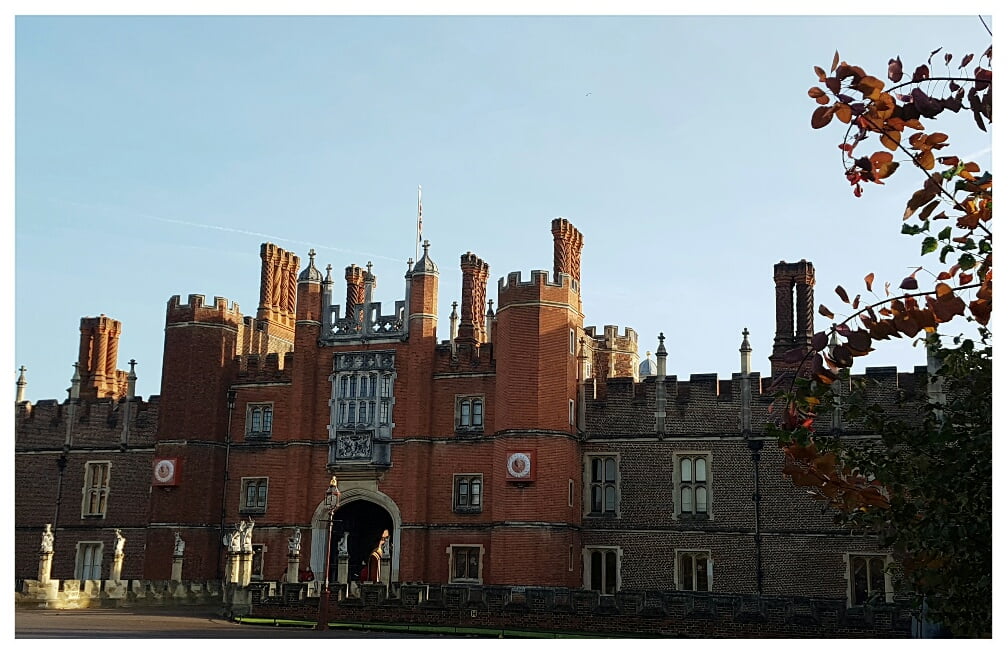 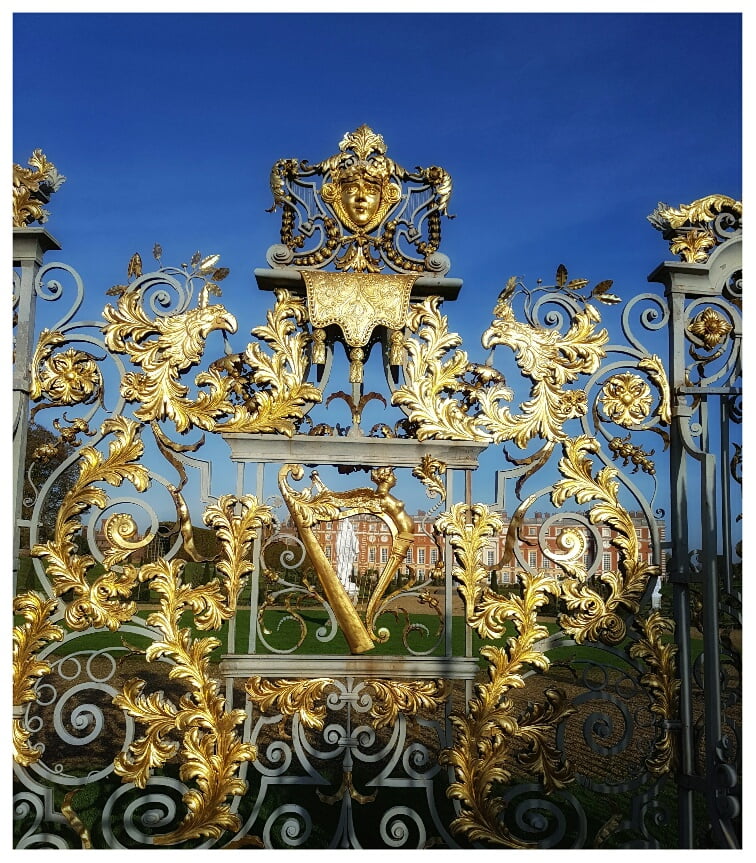 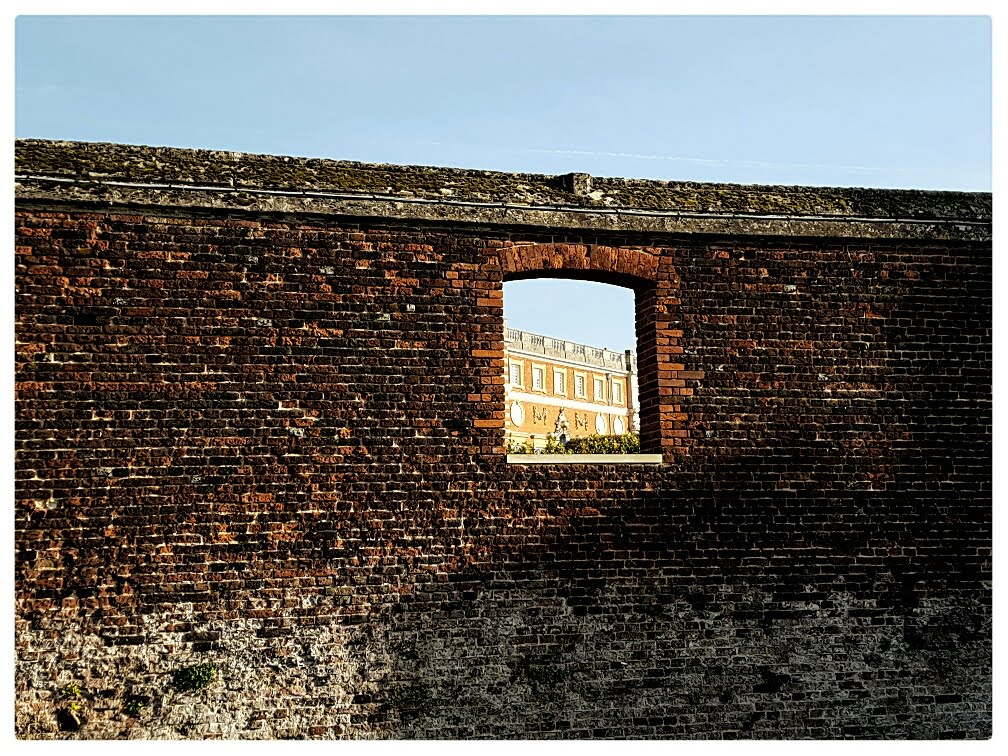 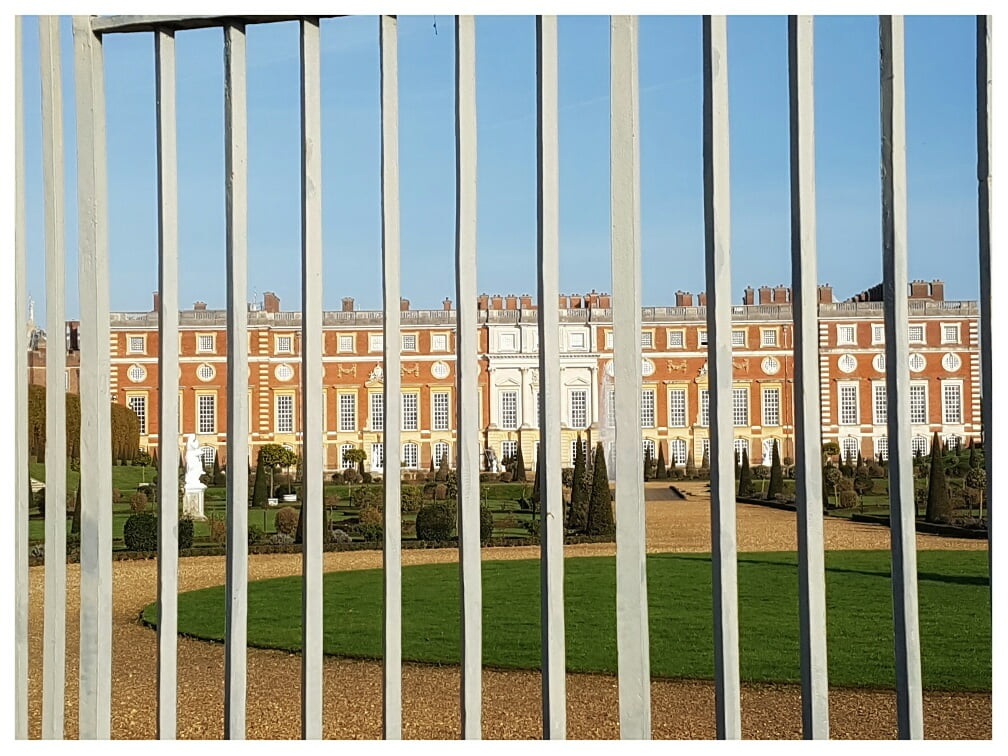 The start is Hampton Court.  (A mere 18 pounds entrance fee; too rich for my blood.)  The path along the bank follows the Hampton Court Park which functions as a commons/golf course/deer pasture/duck sanctuary/dog off-leash park.    It was at Kingston Upon Thames, where you cross the river to stay on the path, I discovered I was three miles into the walk, not kms.  You can, if the signage is correct, walk all 29 miles from Hampton Court to Tower Bridge. 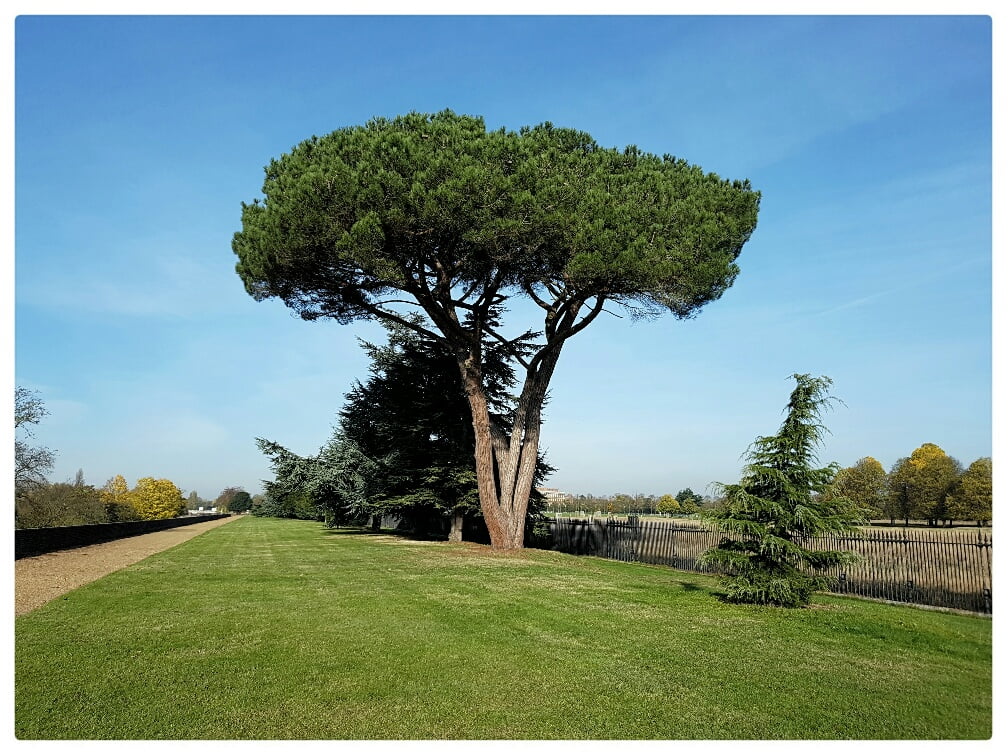 After Kingston you walk through Canbury Gardens, Ham Lands (a 72 hectare nature reserve), Ham Lake, past Eel Pie Island, across from Marble Hill Park, along Petersham Pastures, through Buccleuch Gardens then into Richmond.  At the end of it all lies the White Cross, a Young’s pub, some gold at the end of the rainbow.  The day started cool.  The day started cold: five degrees (Celsius, but, yes, there is Fahrenheit all over the place).  I was zipped and grateful for packing a scarf.  But by midday it was (according to the BBC) 10 degrees, although eating lunch on the deck of the pub with my jacket off it must have been hotter with the humidex…

After lunch I caught the train back to Russell Square intending for a nap but as with all things London I was out of time.  People jokingly talk about doing one thing a day; London is the apogee of ensuring you suffer if you try to break it.  The play I was seeing started at seven (7 p.m.!).  There wasn’t much time to do anything but make a cup of tea and head back out to the tube. 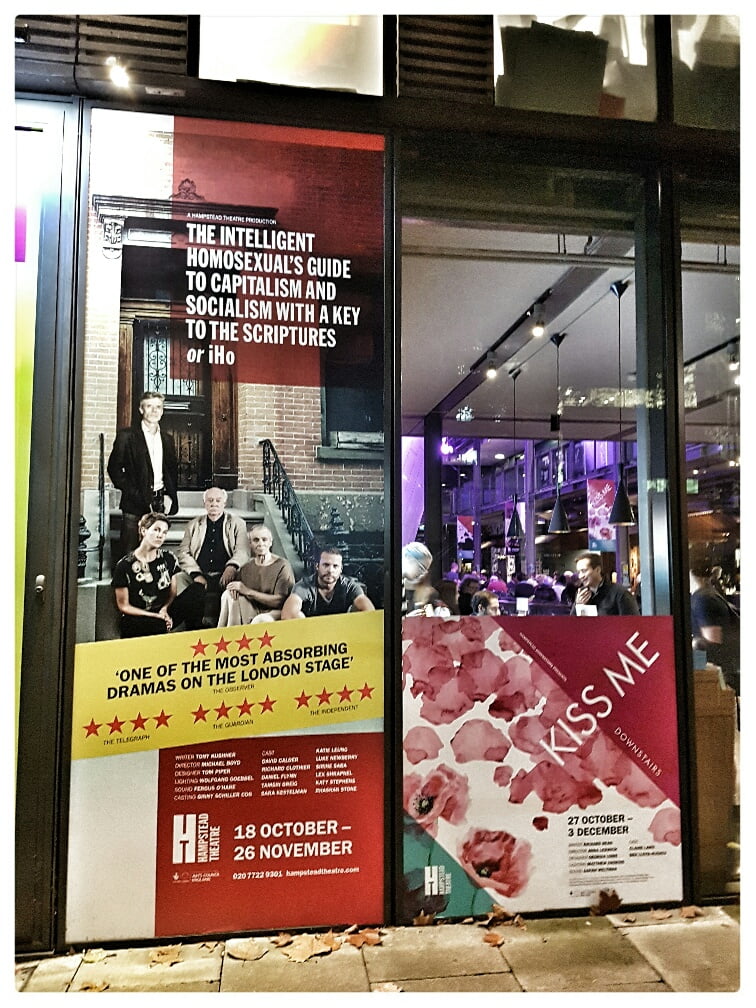 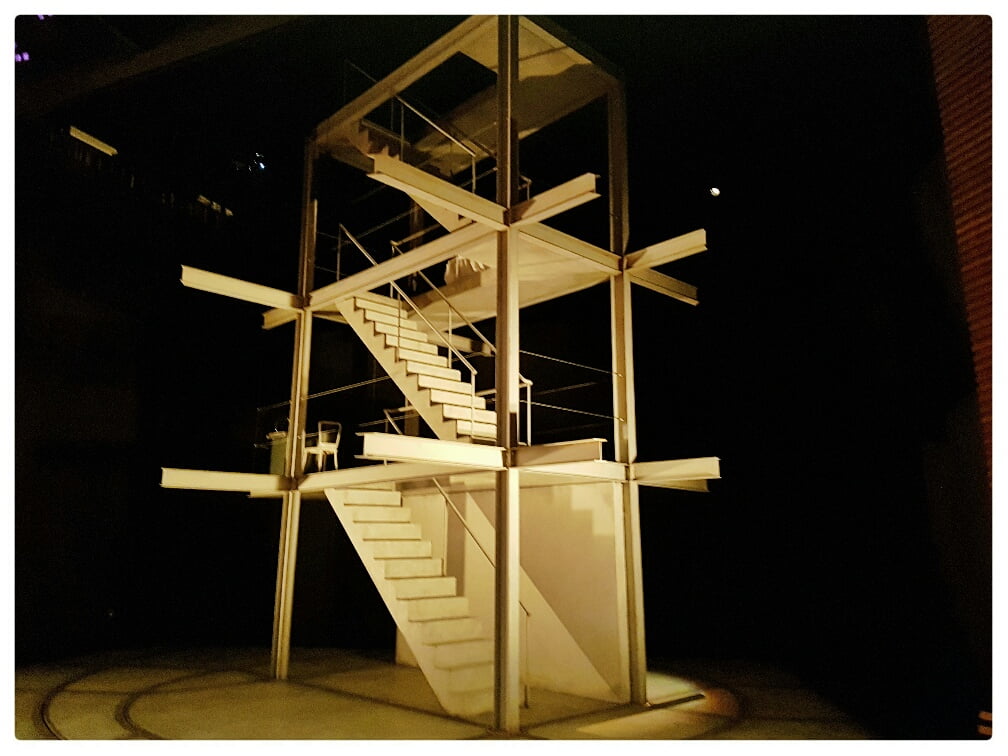 Tony Kushner’s iHo is a cerebral tour de force played exquisitely by an ensemble cast at the Hampstead Theatre (which is in Swiss Cottage).  Despite the “generosity of text” (the first act is an hour, then an intermission, the second act an hour ten, then an intermission, then another 50 minutes–I mean it could be Wagner) it was emotionally riveting, even given the generally flawless Brooklyn accents which faltered only a couple of times towards the end.  Kushner’s writing is a collision of metaphor with plot; you’re never sure if there is a story developing or just a lot of deeper meaning crammed onto itself like a heap of dirty laundry. He never seems burdened by offering too much exposition.  Barbs aside, it was brilliant; but when Woody Allen exaggerates reality, in say Radio Days, with a whole family talking at once, the chaos is pure humour, pastiche. Wen Kushner actually develops character and plot together with seven actors in three different scenes all talking at once, that’s exhaustion, a passive aggressive taunt.  (At least in Tamara, the 1981 play about the artist of the same name, you followed characters from room to room absorbing the plot how and when you wanted.)  Still, sold out, two ovations, chillingly good.   If you left on a sort of artistic high, as I did, then hit the tube, you were quickly deflated by the Scottish and English football fans celebrating (England) and drunkenly commiserating (Scotland) the World Cup qualifying match.

All that said, after such a stupendous day, nothing could have been as thrilling, surprising and memorable as seeing one of the finest living UK actors sitting alone in the foyer.  That tops seeing Mike Nichols at Heroes in 2005 (but not of course David Bowie in Chelsea in 1986).