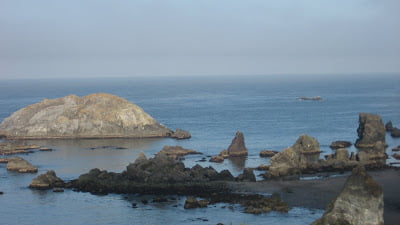 Thursday (so I’m told), August 18, 2011: A glorious morning dawned, as the hymn goes, but we were a bit out of joint.  SS was kept awake by the neighbouring room, who were awake until two, as well as the tsunami siren going off in the middle of the night (how he knew it was, specifically, a tsunami siren remains a mystery).  I too felt groggy, so our early start was delayed, but we were on the road by eight.  It was a 500 plus km day… 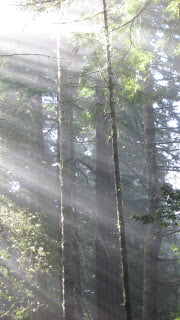 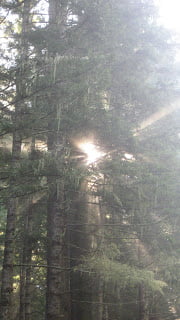 The road swept by archetypal seaside sights, rocks, dunes, miles of beach (the “wild river” portion of the OR coast, the southernmost area, was beyond impressive) into Brookings, where the glorious weather faded, and, as we crossed the state border, turned gloomy.  Gas went up from $3.67 a gallon in OR to $3.99 in CA—but liquor outlets abounded, I suppose because of CA tax.  At one point the car thermometer hit 57 degrees and we turned on the heat (I was, after all, in flip flops.  It’s August!).  The 101 in Oregon, a “scenic byway” turns into the Redwood Highway in northern California, but initially, as we followed the Smith River towards Klamath, it was a tad dull.  How soon that changed.
South of Klamath is the Redwood National Park.  The weather wasn’t perfect but the sights didn’t suffer.  Despite the ocean fog, floating through the giant redwoods, the magnificent trees were Ansel Adams impressive.  It was hard not to multiply the age of the trees—assuming the average tree was older than 800 years—as a measure of value.  We wondered how many 800 year old structures have retained their function without disrepair?  Discuss.  We pulled over a few times to let the less impressed pass by.  Various amusing and sometimes sad commercial enterprises dotted the landscape, but it was hard to see anything as impressive or majestic as, simply, the trees. 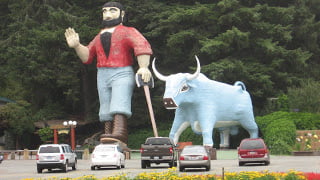 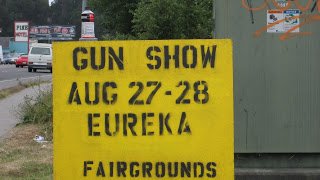 The highway wound through forest, farms, lagoons and towns until we reached the first major development, Eureka.  To that I can only say, no, I have not found it; it wasn’t.
South of Eureka turned heavenly.  It was sun drenched and clear, for me scorching (we hit 79 at one point), the road through redwood forests and townships.  A byway along the old Highway 101, called The Avenue of Redwoods, left us reeling.  But we were also short on gas—and when I asked in a town where the nearest station was, we had to backtrack 10 miles (as opposed to go forward 20).  That cut our side trip in half.  We had lunch outdoors at a general store in a tiny spot called Del Rio, then back onto the freeway.  Which, in the American spirit of brilliant engineering never ceased to amaze me—i.e., how much of 101 was freeway,actual  65 mph two lane freeway.  That all changed as we took the Highway 1 cutoff to the coast. 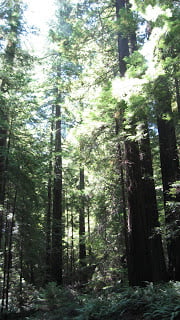 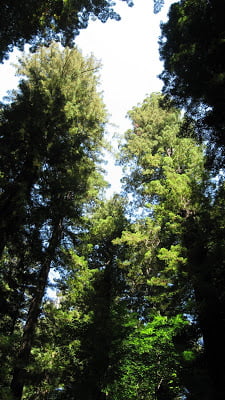 For the first 25 miles off 101 the coast connector snakes up a mountain and down the other side, a series of harrowing switchbacks with nary an inch of shoulder to spare.  Most corners were 15 mph and some were 10 mph—speeds which didn’t afford an ounce of “cheating.”  It made the gravel hairpins on Harris Rd on Saturna (recently voted one of the ten worst roads in BC) look like cake.  The temperature dropped as we approached the Pacific and once again mist set in.  But the narrow roads with steep drops and brutal curves continued.  The patchy fog might have been a godsend, for in those breaks where it was clear the drive became a little beyond the pale. 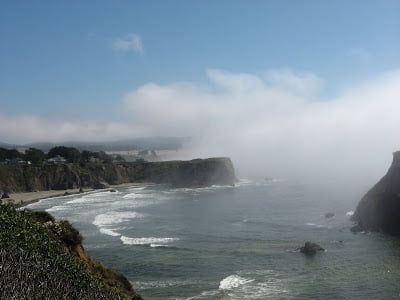 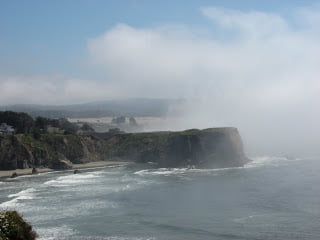 We stopped in Fort Bragg for groceries, where BC Hothouse peppers were $4.99 a pound, CA field peppers 99 cents.  From FB about ten minutes south to Mendocino, then another thirty or so to Irish Beach.  So a major drive, but most of it without much traffic and stupendous weather.  We have an actual home for this leg of the trip.  There is a large yard, four decks, a hot tub, two bedrooms, two baths, W&D, kitchen with all the mod cons, HDTV with 200 plus Dish stations, and a stupendous view into the Medocino Headlands.  There is also the cool Pacific breeze and no neighbours up until two.  SS cooked up a wonderful ravioli with pesto and fresh greens with heirloom tomatoes.  We toasted with a bottle of Gosset (I am trying to make sure I don’t go the route of J M Keynes, whose only regret in life was that he didn’t drink enough champagne.)  The dog, a little disoriented at all these various dens, is hard pressed to figure our agenda.  That will all change tomorrow on the beach I’m sure.

Out of Sight: The best Elmore Leonard film adaptation?  It gets my vote.  Has none of the “look at us perform” ingness of the Get Shortys and their ilk.  And in the DVD extra material it turns out J-Lo was actually in a trunk initially for the in a car trunk scene.  Who knew she would go on to Monster in Law, Gigli and a host of other so-memorable films I’m hard pressed to remember any others?  George Clooney certainly didn’t falter, nor Soderbergh.  Yet it’s not either of their greatest movies by a very long shot.  That said, it’s certainly not boring and hugely approachable, recommendable even, although, like the steep drops of Hwy 1 to the roaring surf, and the hairpin turns, not to everyone’s taste I guess.