So said the tabloids; the movement to reject Australia Day as a testament to European presence was dominating social media.  Happy Invasion Day some were calling it. 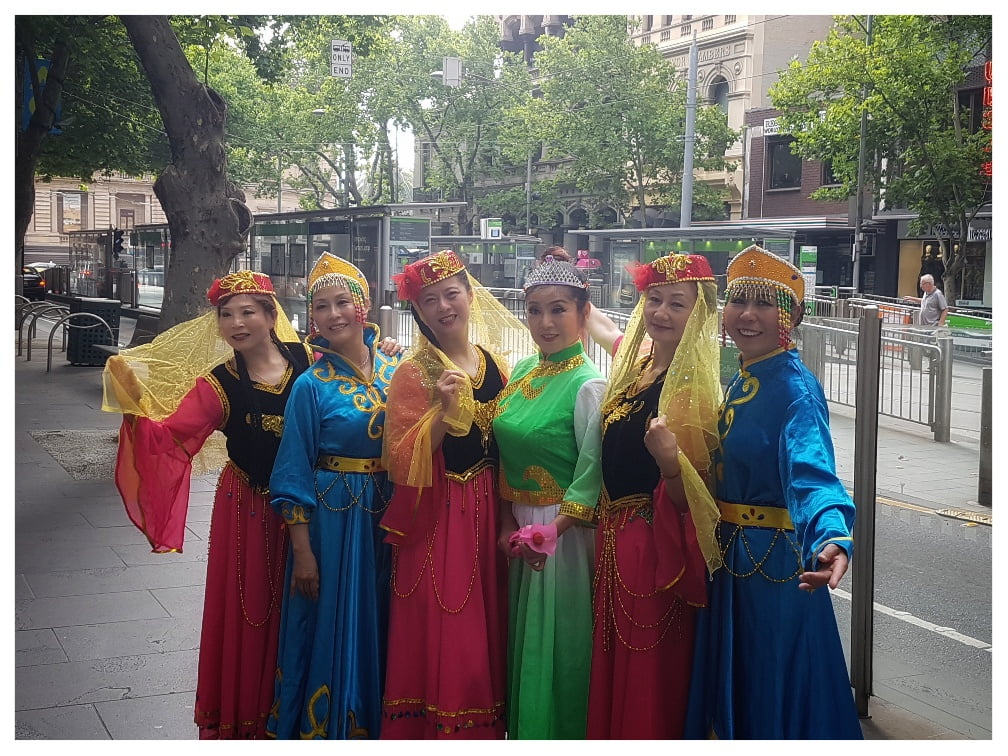 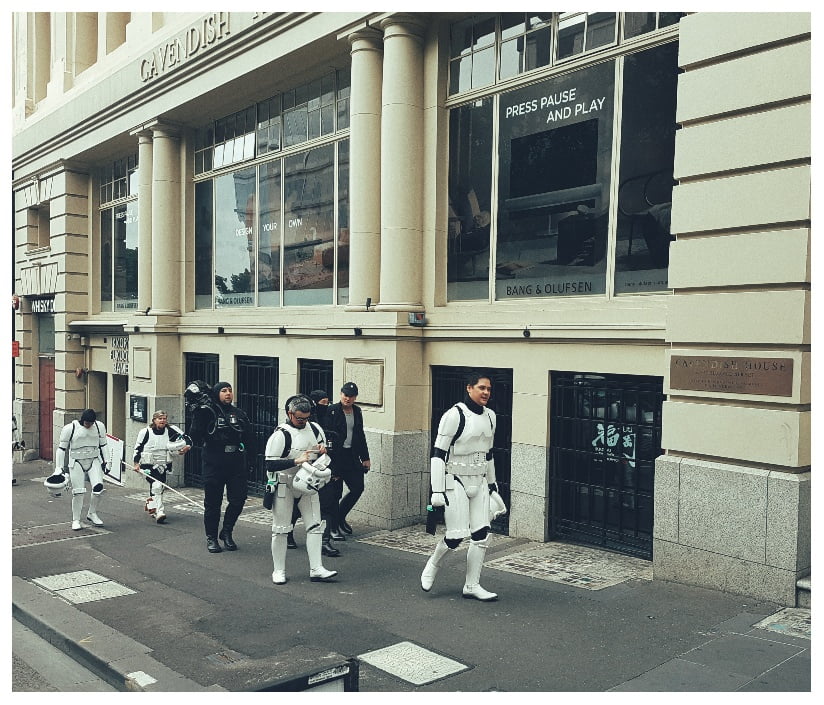 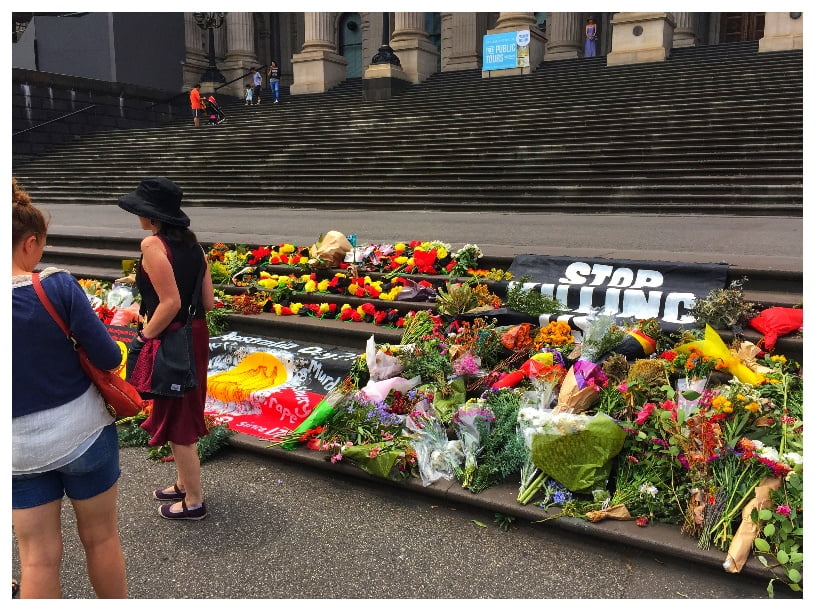 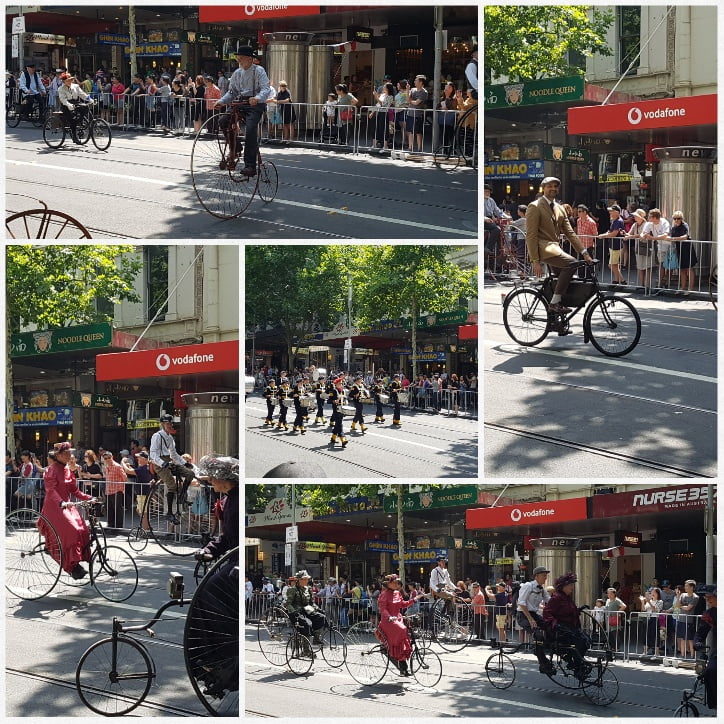 The parade passes by. 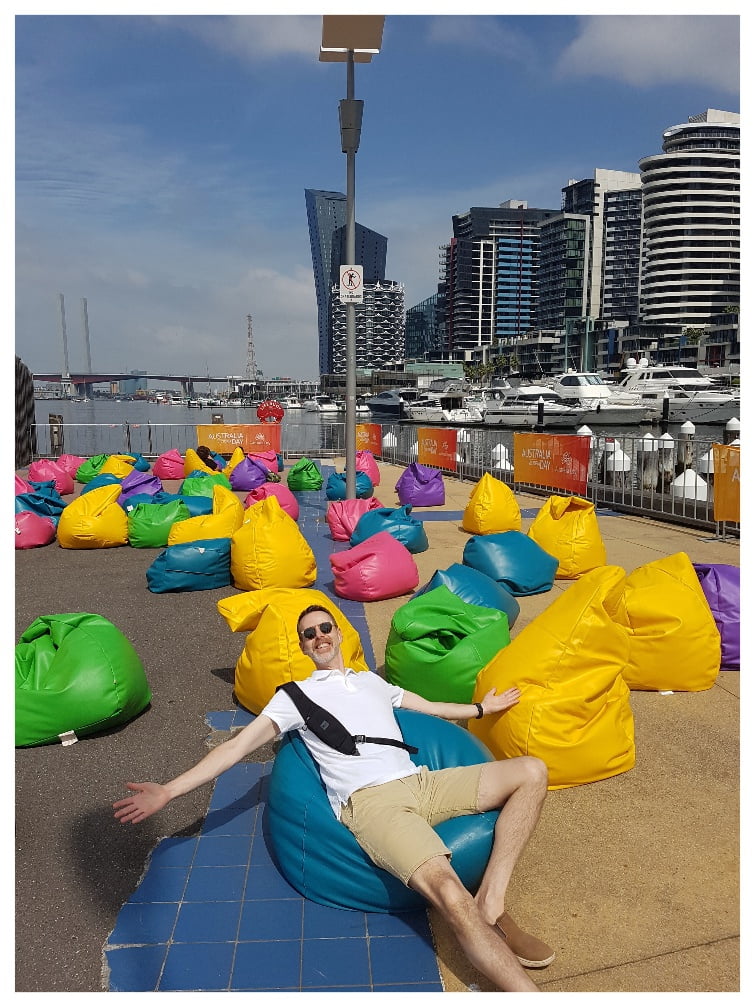 It was hot.  It was only just over 30, but very humid in the AM, although it cleared in the afternoon, the humidity dropped, then it was just hot hot.  We walked the Yarra again, first Soutbank, then crossing at South Wharf north to Docklands, a rehabilitated neighbourhood akin to London’s Canary Wharf.  About 1.5 hours.  We became obsessed with the clash of architectural styles which dominated the new builds, no better shown than in this retro condo and monolith behind it. 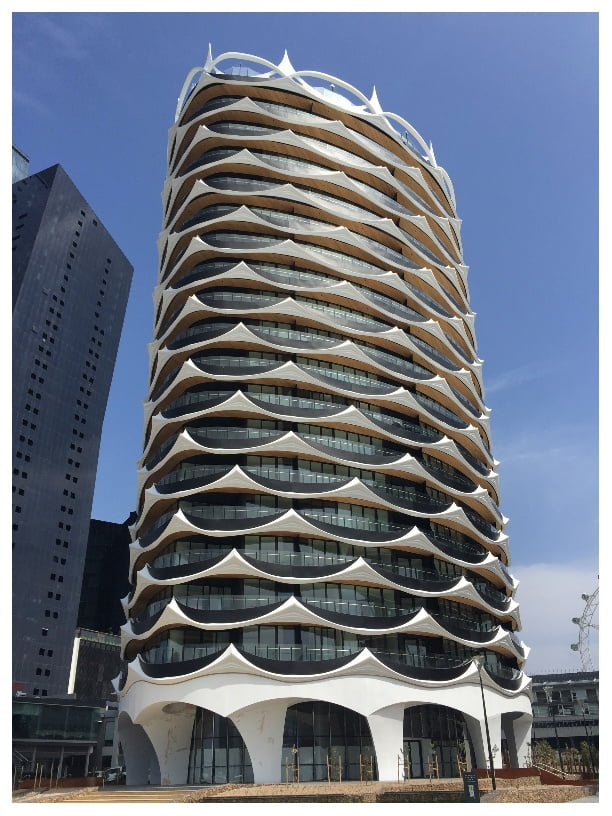 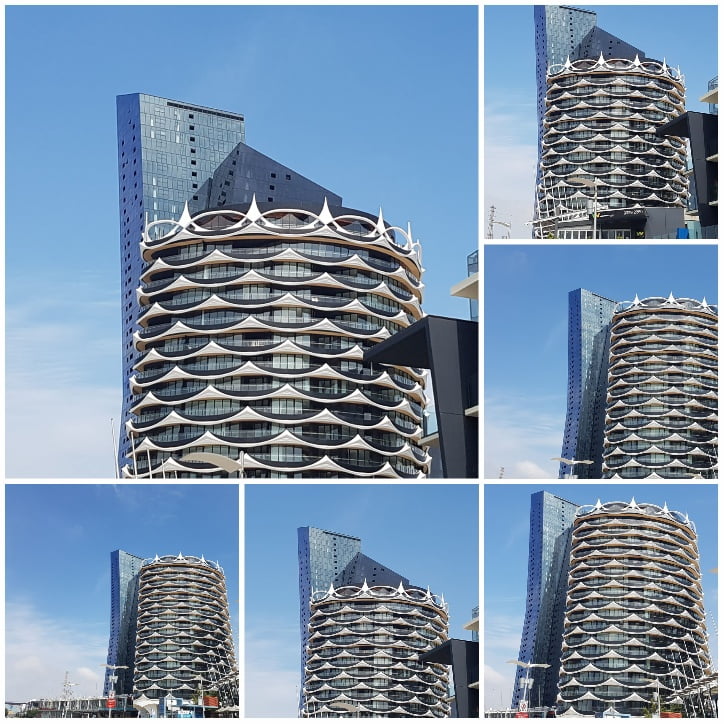 As it neared lunch we caught a tram back into the centre for some window shopping, stopping at the David Jones department store for some eats at its tony food hall. 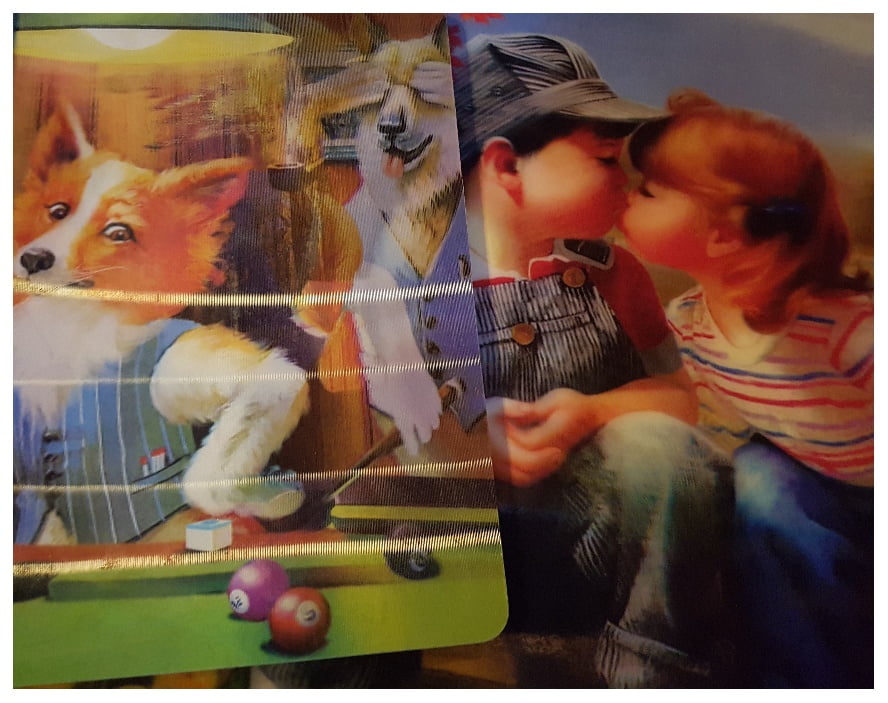 3-D menu and placemat.  You can only see the dogs cheating and the kids kissing if you toggle the images. 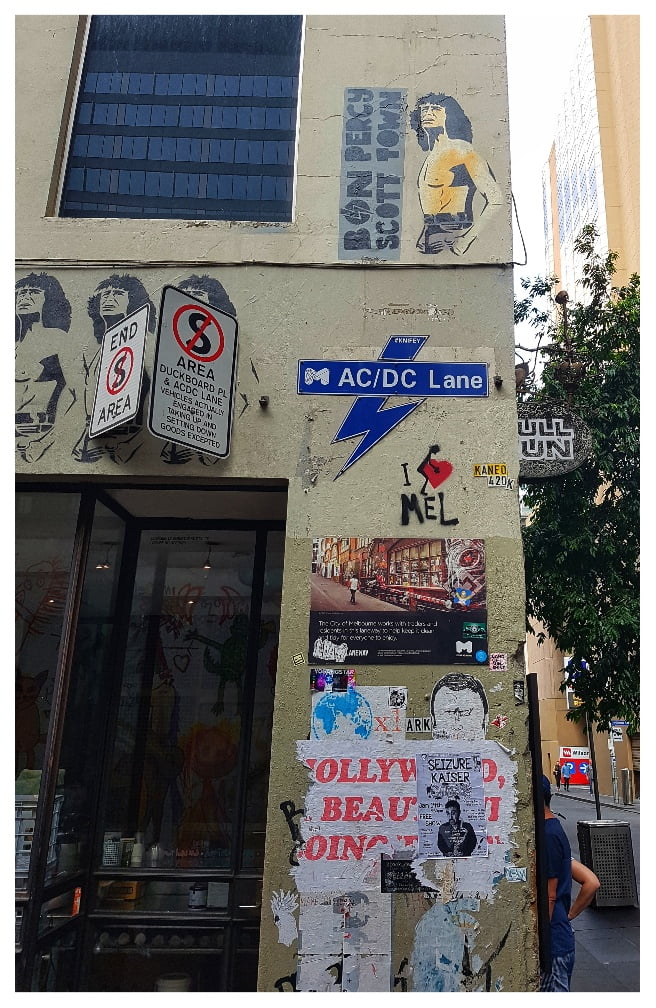 If for some unknown reason travel seems like bliss, or even just a good time, take three minutes to watch Tripp and Tyler do air travel in a car.  Excuse me sir, would you like to buy some ear phones?  Because, really, why is travel such a hassle?  Walking and eating in Melbourne isn’t: For dinner we went, Florida senior style, to a restaurant at 5 p.m.  Beauty of doing this is 15,000 people, two weeks of the year, are all having dinner between the day and night sessions at the AO, so you arrive at five and the places are already buzzing.  Tonight we ate at Marion, a wine bar in Fitzroy about 15 minutes walk north of the hotel. 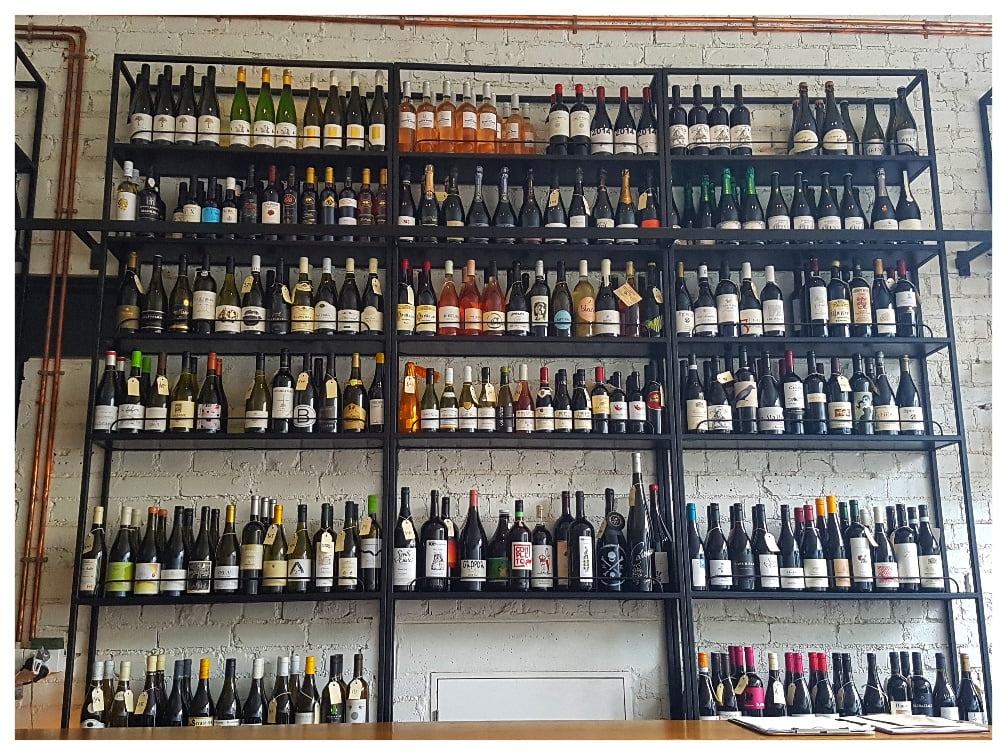 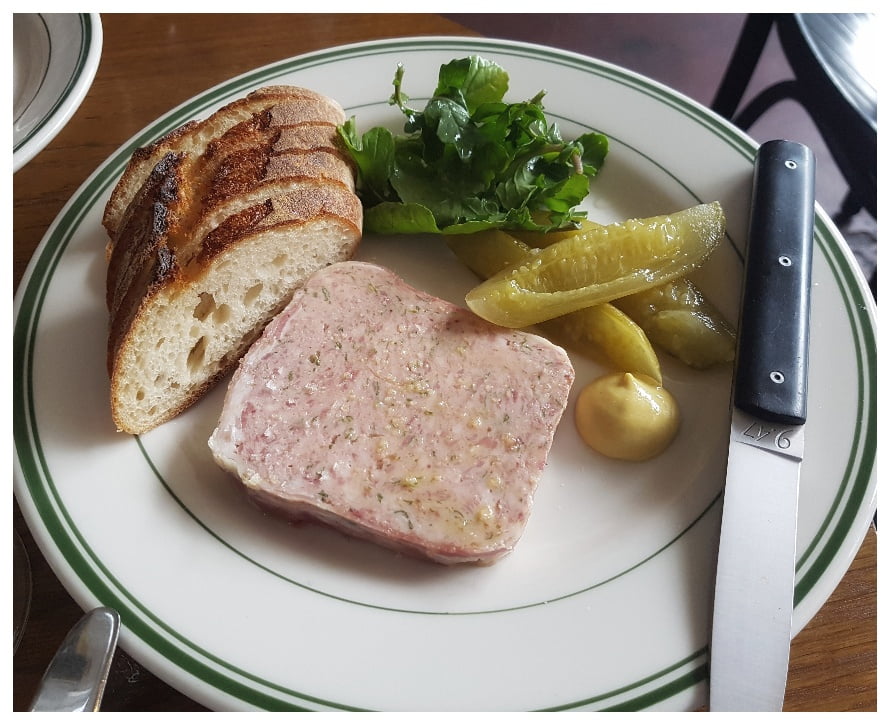 House made terrine, in-house bread and pickles; superb.  I would say this was our best meal to date; a casual restaurant, not stuffy, well considered food, didn’t cost an arm and a leg. 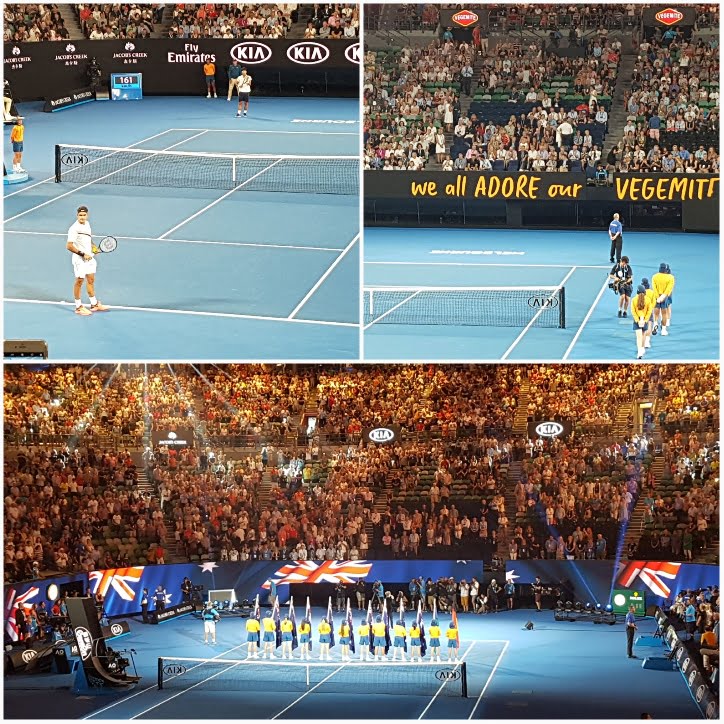 The tennis tonight, the last semi-final, Federer and Chung.  As unlikely a semi as anyone could have ever imagined.  So goes sport.  I may be sitting in the shade, and it may be an open air stadium, but 15,000 people all sweating together is not pretty.  The collage shows the national anthem followed by, wait for it, the Vegemite song (seriously: it was Australia Day after all) and Roger serving.  This was fantastic tennis.  Roger was a clinic, painting the lines, every trick in the book, he totally befuddled Chung.  There was huge excitement in the arena (which, due to some light rain, was tennis played with the roof closed, but without air conditioning).  Then, only an hour plus in, due to a blister, a blister of all things, Chung conceded.  Jeez, half the fans in the stadium made the trek to Rod Laver arena with a blister or two.  HUGE letdown.  GREAT beginnings then just sheer disappointment. 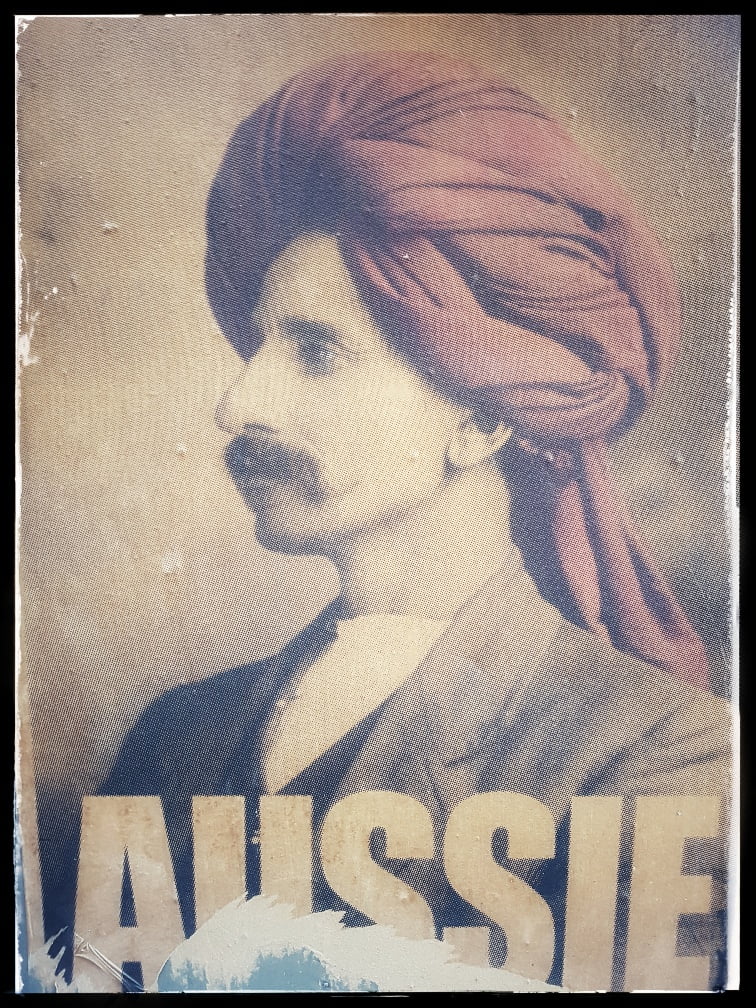